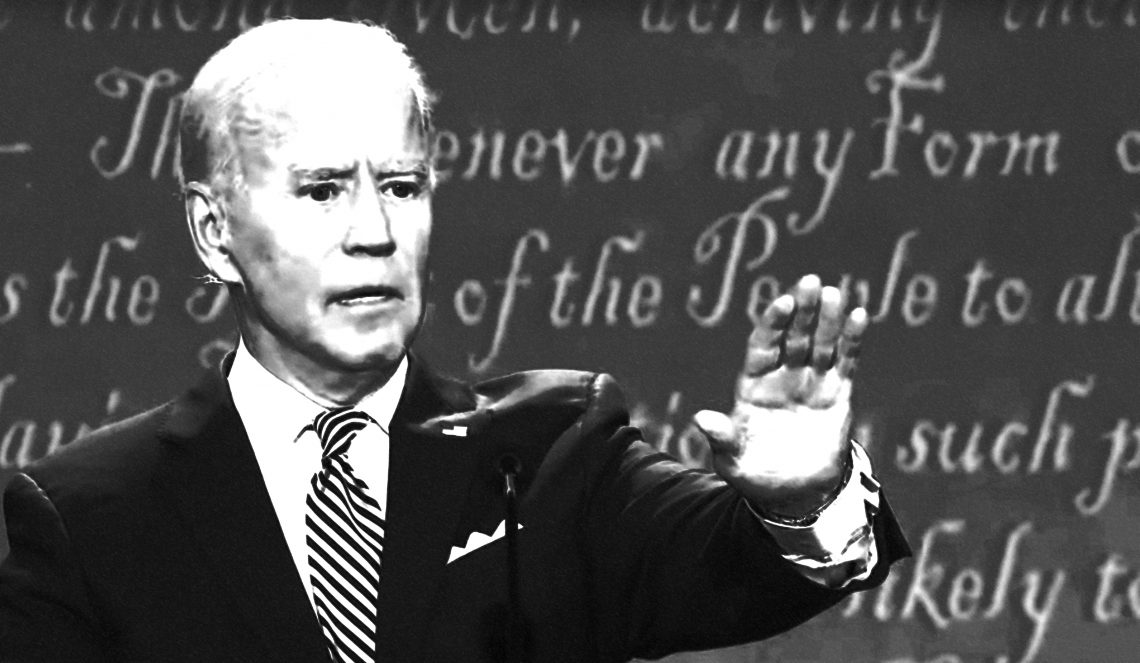 The night of the first Presidential debate between President Donald Trump and former Vice President Joe Biden on September 29th created viral controversy over whether Joe Biden was wearing some sort of device on his left wrist, or the rosary from his deceased son Beau who passed away on May 30, 2015. The mainstream media quickly flooded the narrative with headlines about right-wing conspiracy theorists while exclaiming, “it’s his dead son’s rosary” and the social media trolls quickly pounced the scene to discredit anyone alleging otherwise. But the fact of the matter is – it wasn’t his dead son’s rosary – and the evidence is below.

CLAIM by Reuters: “The object on his wrist appears to be a pen or a rosary that he wears to honor his late son,” and they linked to the 2017 interview with Megyn Kelly.

CLAIM by USA Today: “It’s much more likely that object is a rosary,” and they linked to the 2017 interview with Megyn Kelly.

CLAIM by AP News: “In fact, Biden was wearing his late son Beau’s rosary beads on his wrist. Photos and video from the debate show the rosary peeking out of his cuff,” and they linked to the 2017 interview with Megyn Kelly.

CLAIM by Snopes: “It’s a rosary that Biden wears that belonged to his son Beau Biden, who died in 2015 of cancer,” and they linked to the 2017 interview with Megyn Kelly.

CLAIM by Social Media Trolls: “It’s his dead son’s rosary idiot! He always wears it on his left wrist and never takes it off,” and they linked to the 2017 interview with Megyn Kelly.

CLAIM by Joe Biden:  On November 13, 2017 in the Megyn Kelly interview for the opening night of his book tour, that all mainstream news cited, Biden claimed “I have not taken off the rosary Beau was wearing when he passed since then, but it’s my connection with him.”

Whereas Biden may very well have been wearing his rosary, tucked away beneath his watch where he typically wears it, he doesn’t wear the rosary as often as people may think, he lied to Megyn Kelly on November 13, 2017, and at no point in time over the past five years has the rosary actually stuck out of his cuff in a vertical fashion, up his wrist. By the way, the Biden’s made $2.7 million in book deals after leaving the White House.

From reviewing 4200 Photos plus a dozen videos between May 30, 2015 when Beau passed away, and September 29, 2020 when the presidential debate took place.

3 Events revealed an entirely different bracelet he was wearing, which he later referred to as Beau’s rosary as well

1 Event where Biden revealed an entirely different piece of jewelry that he kept in his pocket, referring to it as Beau’s rosary as well

3,900 Photos revealed it can’t be seen under his sleeve and if he was wearing it, it never stuck out beyond his cuff

The Trick & Why This Is So Important

The Biden campaign and media’s main emphasis was to squash the wrist object as quickly as possible, by directing people’s attention to the interview with Biden talking about his dead son’s rosary, so as to put a lid on it by shaming and guilting people. They spent the majority of their words focusing on discrediting claims of a wire under the lapel and smart contact lenses because these are easier to disqualify. It would be impossible to prove the contact lenses, and the video of the alleged wire under the lapel is in fact a shadow, making it an easy target to discredit. If one watches the video from several news channels, you can clearly see the hard-lined shadow shift and evaporate. Unfortunately, this left people quickly discrediting the object on the wrist, which is quite significant.

If there is one tactic people should be all too familiar with by now, it is the guilt and shame narrative they attach to every agenda to trick everyone into silence. They’ve been doing it for decades with the LGBTQ movement while exploiting transgenders to further their agendas. They do the same with racism, while trying to shame white people into believing they are racist, even when they’re not. They even do it with their abortion agenda, and try to make people feel bad for pedophiles as though it is a mental illness and they are a victim. How dare you question a man who is wearing a rosary that belonged to his dead son?! It’s the oldest trick in the book to keep people silent, and it even worked on some conservatives who were too afraid to be deemed a “conspiracy theorist,” while letting their own eyes deceive them, or bothering to dig into photo and video evidence.

This isn’t about a man who lost his son. This is about a man that has shown clear signs of dementia, has been implicated in very serious crimes, is notorious for lying, and is running to be the President of the United States of America.

This is a man who has lied about the night of a presidential debate, telling people that the strange object under his left cuff was a rosary, and the mainstream news covered for him. This same man used teleprompters for tv interviews because he can’t remember what he is talking about from moment to moment. This is a man who refused to be checked for ear devices prior to the debate. This is a man who took a knee for BLM, a Marxist organization rooted in communism. This is a man who calls Antifa “an idea” and will not condemn them for burning cities, looting, and committing murder, which was all witnessed during the debate. They are attempting to install this man so that the far left communists can take over and run this country into the ground, because he is definitely not fit to run a country. Are you willing to play the shame game over a rosary, or do you want the truth exposed?

All mainstream news sources are pointing to this interview the Bidens did with Megyn Kelly to kick off their book tour back on November 13, 2017, over two years after Beau’s passing on May 30, 2015. This is what Joe Biden said about the rosary:

“Beau wore these. Hunt got these for Beau and me and ah, at Lady of Guadalupe down in Mexico, and we all wore them. I’m a practicing Catholic and Beau was a devout Catholic as well and it was more, both of us found solace in the elements of the church. It’s almost like meditation for us. And so, I have not taken off the rosary Beau was wearing when he passed, since then, but it’s my connection with him.”

Watch this short clip where Biden talks about the rosary.

Joe Biden wears one of two bracelets on his left wrist, and always wears it behind his watch. He moved it in front of his watch here for people to see while they were discussing it. Notice that the bracelet always runs horizontal across the wrist, and as the wrist moves, the beads and charm all drop. At no point does any part of this bracelet go up his wrist in a vertical fashion. GRAVITY.

The last picture above consists of different beads, but with the same charm hanging from it.

July 30, 2015
Exactly two months after Beau’s passing, Biden was golfing with former president Barack Obama. He was not wearing the rosary, despite telling Megyn Kelly and the public in November 2017 that he hasn’t taken it off since Beau passed away.

September 7, 2015
Four months after Beau’s passing, he was not wearing the rosary.

October 7, 2016
Biden was wearing a completely different bracelet, one with a squared off wood cross, rather than the one he spoke of with Megyn Kelly. Here you can see where a portion of it slid up above his watch. Again, it does not protrude in a vertical fashion up his wrist. Gravity.