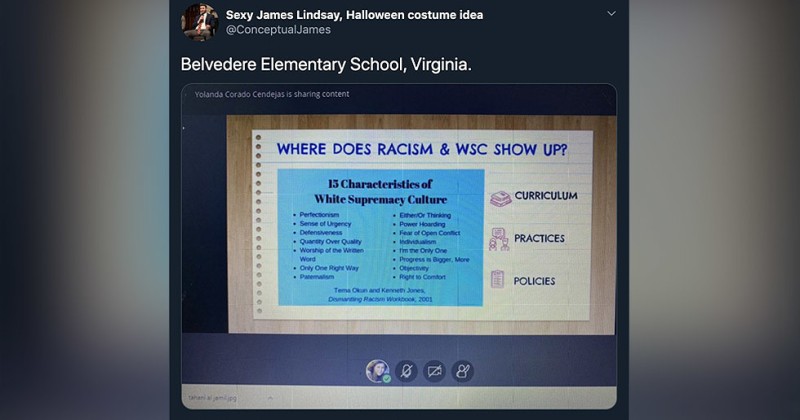 Critical race theory continuing to be taught despite Trump ban.

Children at an elementary school in Virginia are being taught that traits such as “objectivity” and “perfectionism” are ‘racist’ characteristics of “white supremacy.”

Author James Lindsay posted a screenshot of the lesson outline, which is apparently taken from a 2001 Dismantling Racism Workbook by authors Tema Okun and Kenneth Jones and is being taught to kids aged 6-11 at the Belvedere Elementary School in Virginia.

The “15 characteristics of white supremacy” include “perfectionism,” a “sense of urgency,” “individualism,” and “objectivity.”

By discouraging positive concepts such as these by associating them with white supremacy, teachers are actually harming the chances of non-white children from progressing in school.

In other words, far from being anti-racist, the teachings are actually racist.

Other respondents pointed out that such teaching is hallmark of Critical Race Theory (CRT), which is still being taught in U.S. schools despite being banned after an executive order by President Trump.

This is what critical race theory teaches in our schools, businesses, and government agencies. @realDonaldTrump was right to cancel it and parents should demand their schools stop teaching it. https://t.co/18qk2n9xV1