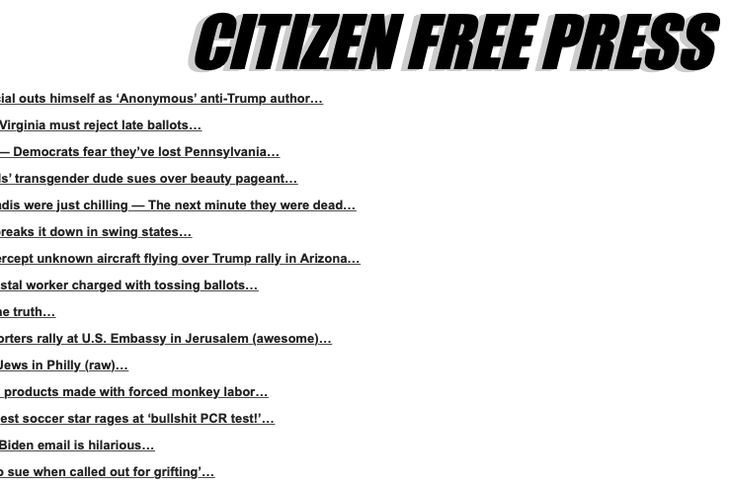 The Drudge Report alternative Citizen Free Press, which has racked up 75 million page views in October so far, mysteriously disappeared from search results on Bing, Duck Duck Go, and Yahoo on Wednesday. Microsoft told PJ Media that it is working on a “fix” but the mysterious disappearance still raises serious questions.

Citizen Free Press raised the alarm on Twitter about an hour after the disappearance.

“Attention Bing: Citizen Free Press has completely disappeared from your search results in the past hour,” the secretive one-man operator who goes by “Kane” tweeted. “The link to our homepage suddenly is gone from your results 7 days before the election. CFP gets 15,000 visitors per day thru Bing.”

“For BING to suddenly remove Citizen Free Press from search results — 7 days before the election — certainly raises some questions. Let us hope this is just a technical snafu and not a permanent ban,” Kane told PJ Media. “CFP is not a bit player — with 75 million pageviews so far in October, it is one of the largest conservative news sites in existence.”

“For one of the 3 major search engines to mysteriously remove our link would be a gross violation of free speech, and an untenable act of censorship,” Kane added.

PJ Media reached out to Microsoft and received a response from a staffer with WE Communications.

“Microsoft is aware of the content not showing up and actively working on a fix,” the spokeswoman said.

As of Wednesday evening, the link to Citizen Free Press (citizenfreepress.com) still does not appear on the Bing search results.

As The Washington Examiner‘s Paul Beddard reported in August, Citizen Free Press has pulled away from other conservative websites seeking to replace the Drudge Report after Matt Drudge’s website rejected conservative content for a more liberal spin heavily devoted to legacy media content.

Editor’s Note: It’s time for conservatives to stand together and fight big-tech censorship. Join PJ Media VIP and use the promo code CENSORSHIP for 25% off your VIP membership.

“It’s fantastic. I love it. I’m breaking every rule in the modern digital news business with no social media, no Facebook, no branding, no email, and the site is succeeding beyond my wildest dreams,” Kane told Beddard.

According to the web traffic counter SimilarWeb, he recorded 6.35 million visits and 45 million page views in July. While those represent just a sliver of the Drudge Report’s numbers, they put Citizen Free Press in the top echelon of conservative news sites. Visitors also stay on the site for a remarkable 17 minutes.

Citizen Free Press achieved those results during a period when it was briefly knocked off of Google.

Citizen Free Press will weather the mysterious disappearance from Bing, Duck Duck Go, and Yahoo, whether or not Microsoft does indeed fix the problem. One way or another, Microsoft has some explaining to do.

Citizen Free Press has again appeared on Bing’s search results, although the first search result includes “Breaking” text that does not belong. Microsoft did not explain what had happened.