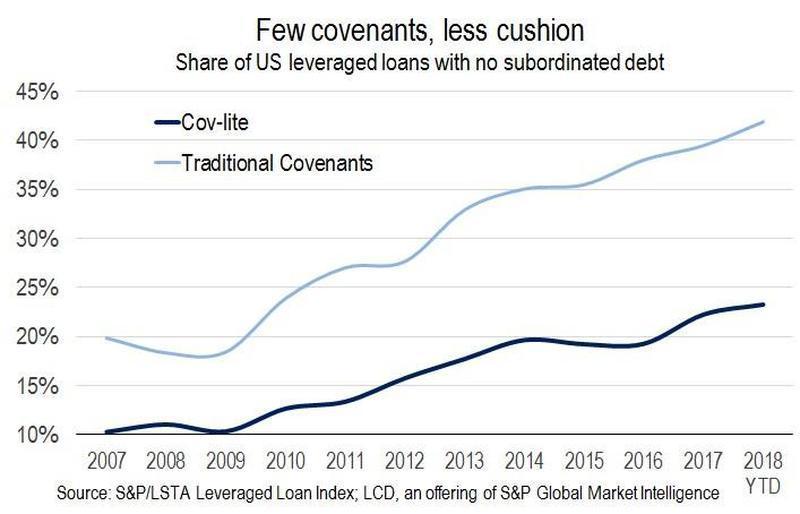 Back in March 2016, we published an article explaining how the coming default cycle – when it finally hits – would be different: it would be marked by record low recovery rates. While there were many reasons for that, three stood out: i) the disconnect between fundamentals and asset prices thanks to the Fed’s constant manipulation of markets, ii) the record layering of debt upon debt, much of it secured, and iii) the years of covenant-lite deals that stripped most if not all creditor protections over the past decade (something which as we noted recently has resulted in bitter creditor fights and a “civil war” involving some of the most prominent names in investing).

Fast forward to today when Bloomberg picks up on what we said almost five years ago an in “Bond Defaults Deliver 99% Losses in New Era of U.S. Bankruptcies” writes that more and more, bondholders are fighting over recoveries as low as 1 cent.

The story should be familiar as we have discussed in constantly in recent months: in a post-covid world, where bankruptcy filings are surging, many lenders are coming to the realization that their claims are almost completely worthless, just as we warned would happen in 2016.

Instead of recouping, say, 40 cents for every dollar owed, as has been the norm for years, unsecured creditors now face the unenviable prospect of walking away with just pennies — if that.

Several stark examples of this epic collapse in recoveries is the current price of a handful of retailers’ bonds. Men’s Wearhouse, which filed in August, traded this month for less than 2 cents on the dollar. When J.C. Penney Co. went bankrupt, an auction held for holders of default protection found the retailer’s lowest-priced debt was worth just 0.125 cents on the dollar. For Neiman Marcus that figure was 3 cents. Indeed, as the following chart of median CDS auctions finds record low recoveries for bondholders (which of course is great news for all those who bought the CDS).

According to Barclays, the median value for companies’ cheapest debt in credit derivatives auctions this year is just 3.5 cents on the dollar, a record low and far below the 23.4 cent median for 2005 through 2019. It also confirms our warning that record low recoveries for bondholders are now the norm.

Bloomberg then focuses on the underlying reasons which as regular readers will note, we correctly predicted years ago. It’s probably why Bloomberg notes that “while few could have foreseen the pandemic’s toll on the economy, the depth of investors’ pain from corporate distress was all too predictable” although they clearly were not “predictable” to all those bondholders and yield-starved managers of other people’s money who are now fighting for any recoveries, in many cases just years after buying the debt at par. Here is how Bloomberg lays it out:

Desperate to generate higher returns during a decade of rock-bottom interest rates, money managers bargained away legal protections, accepted ever-widening loopholes, and turned a blind eye to questionable earnings projections. Corporations, for their part, took full advantage and gorged on astronomical amounts of debt that many now cannot repay or refinance.

If that sounds familiar, it’s because it’s verbatim what we said in 2016. And yes, even Bloomberg blames the Fed:

It’s a stark reminder of the long-lasting repercussions of the Federal Reserve’s unprecedented easy-money policies. Ultralow rates helped risky companies sell bonds with fewer safeguards, which creditors seeking higher returns were happy to accept. Now, amid a new bout of economic pain, the effects of those policies are coming to bear.

This reminds us of something else we wrote back in 2018, when we discussed the surge in covenant-lite deals:

Back then, we quoted Derek Gluckman, Senior Covenant Officer at Moody’s who said that “while the rate of deterioration in covenant quality has slowed, protections remain distressingly weak on average. Investors should remain wary given the risks presented by most loan documents and the likelihood that any steadying of covenant protections is temporary.”

Gluckman added that collateral remains a key concern for investors, and warned that the loosening of covenant protections raises the risk that the collateral securing loans will be unavailable to support recoveries in a bankruptcy scenario.

Separately, an analysis by LCD looked at the debt cushion of outstanding loans – the amount of debt in a borrower’s capital structure that is subordinated to the senior loan – and found that, increasingly, today’s cov-lite deals have little or no debt cushion beneath them. This, as we warned “is important because the lack of a debt cushion significantly lessens what an investor will recover on a loan, if that credit defaults.”

This, too, proved prophetic because as Bloomberg today writes, “the loose lending terms that investors have agreed to mean that by the time corporations file for bankruptcy now, they’ve often exhausted their options for fixing their debt loads out of court.”

They’ve swapped their old notes for new ones, often borrowing against even more of their assets in the process. Some have taken brand names, trademarks, and even whole businesses out of the reach of existing creditors and borrowed against those too. While creditors always do worse in economic downturns than in better times, in previous downturns, lenders had more power to press companies into bankruptcy sooner, stemming some of their losses.

Of course, the one thing that was missing back in 2016 or 2018 was a catalyst triggering a wave of defaults. We now have that, however, the covid-linked lockdowns have added an additional twist of complexity: the pandemic has upended industries like retail and energy, “making it unclear how much assets like stores and oil wells will be worth in the future” further depressing already dismal recovries. But covid aside, the core problem for most companies is one that accumulated, literally, over the past decade with the explicit encouragement of the Fed: they have astronomical levels of debt after borrowing with abandon over the previous decade, then topping up with more to get them through the pandemic.