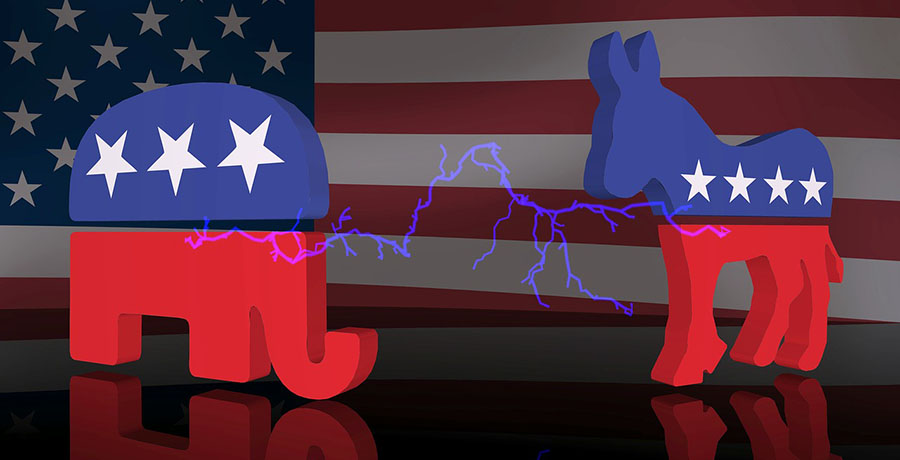 A booming stock market & subdued precious metals will be viewed as beneficial to Trump. The handlers believe that “optics are everything” in the final days before…

by Michael Ballanger via Streetwise Reports

With less than a month to the election of the “leader of the free world,” of the richest, most powerful country in human history, financial markets are noticeably apprehensive as to outcome and understandably concerned with the reaction of the two deeply divided camps. With the Antifa and Black Lives Matter (BLM) “movements” mobilizing to disrupt at every turn, their ideological opponents carry little in the way of monikers but are passionately anti-BLM and anti-Antifa and even more passionately “pro-American,” a descriptive often marching shoulder-to-shoulder with paramilitary and/or white supremacist groups.

The sad part of this misunderstood and misreported conflict is that the 1% elite, empowered by the politicians and the bankers that support them (the “banco-politico cartel”), would have us all believe that this conflict is the ultimate showdown between the conservative forces of law-and-order and the socialist forces of anarchy.

The stark reality is that the vast majority of the 99% that make up the unentitled non-elite, whose role has been to act as doormats upon which the 1% wipe their shoes, have finally had enough. It started with globalization, which shut down the manufacturing core of U.S. industry and shipped their jobs off to China and Mexico, and has culminated in a global pandemic that saw the politico-banco cartel once again enriching, with massive bailouts and liquidity injections, the 1%. This has resulted in all-time highs in stock prices, and wall the while the jobs of the working classes (the “doormats”) were not simply transferred; they were terminated.

I put forth the notion that civil unrest in the U.S. is anything but “ideological” and totally “apolitical.” It is the result of a systemic abuse of the rights of literally everyone not invited into the “club”—the one to which legendary comedian George Carlin referred when he coined the line: “It is one big club (the elite) and guess what? You ain’t in it!”

All you need to do is go back and watch “The Big Short,” the movie based upon Michael Lewis’ bestseller, which chronicled the biggest rip-off of taxpayer capital in history. While Andrew Ross Sorkin’s “Too Big to Fail” glamorized the bankers led by Bernanke and the cast of criminals led by Treasury Secretary (ex-Goldman Sachs) Hank Paulson, the Lewis book lifted up the Wall Street banker’s carpet, revealing a vast network of evils far in excess of anything the mainstream media (MSM) would report. Once you have grasped the contrast between the two versions of the Great Financial Bailout of 2008, you come away with a sense that this is one “club” unlikely to issue us any invites.

Here, in the autumn of presidential election year 2020, we watch the American electorate caught in a crossfire of special interest bullets being showered upon them by the machine gun media, whose contrasting messages are 100% correlated to the individuals or conglomerates that own that media, be it nouveau-riche newspaper barons or the compromised moguls that own cable news. Similarly bombarded by data bombs of varying interpretation and diverse agendas, the poor investor class is getting fed a load of conflicting malarkey that would have them accept two divergent assumptions:

In case you have not yet noticed, those two assumptions are contradictory. Any economy being described as “recovering” does not need stimulus. What the politico-banco cartel wants is to once again be the portal through which the government debt is channeled down to the “average American,” because when you are the guy in the booth at the tollgate, you get your toll regardless of where the drivers go.

“Trade with one of the Industry’s Lowest Cost Brokers! Check out our spreads now! 73% of retail CFD accounts lose money.”. Read More

Bankers are middlemen that luxuriate in the splendor of legalized and legitimized counterfeiting. What percentage of every dollar of stimulus that winds up in the reserve accounts of the member banks is unknown, but if it were zero, the bankers would not take the job, because bankers do not work for free. “Pro-bono” is not in the banker vocabulary.

From an investment standpoint, I continue to believe that the forces of intervention and interference are hard at work in the capital markets arena, working on the assumption that a Trump victory will be a distinct preference over Biden when it comes to friendly versus hostile attitudes toward the financial industry.

Accordingly, a booming stock market and subdued precious metals will be viewed as beneficial to the Trump cause. The handlers all believe that “optics are everything” in the final days before elections, and incumbent presidents want to know that their Wall Street campaign donors are “on it.” Judging from the miraculous recovery by the POTUS from his COVID-19 bout, stocks were given a perfect cover story with which to assault all-time highs by Nov 3.

That is the assumption I have made, and it is one shrouded in cynicism and cradled in revulsion. There is nary a day that goes by that GATA co-founder Chris Powell’s now-famous line fails to resonate loudly: “There are no free markets anymore; there are only interventions.” Were that it be untrue can only be a whim for the terminally naive.