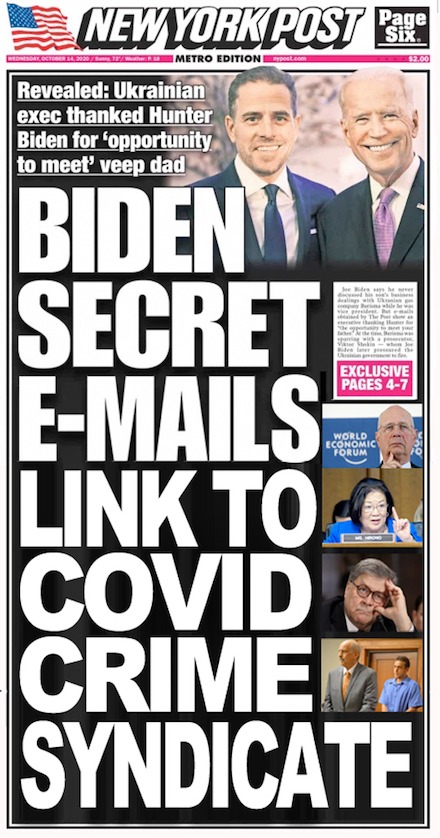 Really, does it get any bigger than BIDENgate?

This father and son scandal of the millennium known as BIDENgate has literally turned into the wish-fulfilling cow that NEVER STOPS GIVING! ! !

What a boon for the Trump Campaign and the President’s re-election prospects.

We’re talking about the most naked, in-your-face, radioactive political scandal of any U.S. election cycle—EVER!

Now that’s quite an achievement … … … even for old “Sleepy Uncle Joe”.

Let’s face it: the apple, the really rotten apple in this case, did not fall very far at all from the totally rotten tree.

“There’s only one difference between the Biden Crime Family and the Clinton Crime Family.   Hillary and Bill really did attempt to hide their multiple, multi-decade crime sprees whereas Joe and Hunter’s crushing crime waves rolled over the land for everyone to see—EVERYWHERE THEY WENT.  The Biden’s outright criminality and transparent corruption took place in a Democrat-controlled environment whereby this very dynamic crime duo really thought they could rape, pillage and plunder with complete impunity.  Then Donald Trump took office.”

That analysis above just about sums up the whole Biden predicament in 2020.

What did Joe and Hunter expect after doing so many bank robberies IN BROAD DAYLIGHT but a full-blown investigation into the ever-burgeoning crime scandal— BIDENgate?!

Not only that, but these two jokers left a trail of robberies, thefts and grand larcenies in nations all over the planet.  You name it: Ukraine, China, Russia.  Hunter went wherever he could rake in the most Hryvnias, Renminbis and Rubles, it appears.  We’re talking about the original “Jerry Maguire” who demanded of everyone:

“Show me the money!”

For example, there is this well-known story that the mainstream media refuses to cover in any meaningful detail

Why did the wife of Moscow’s former mayor write Hunter Biden
a check for $3.5 million?

What we’re really talking about here is a stone-cold shakedown and/or protection racket.  Both Bidens basically used the US government and U.S. Armed Forces as the political and enforcement arms, respectively, for their numerous illegal deals and felonious frauds.  And, there were plenty of deals that never made it even to the Alt Media because of how shady the international cast of characters was.

That’s one thing Joe Biden was always careful to avoid…until now.  Every politician is compelled to keep a safe distance from unsavory characters who are likely to come back to haunt them.  This is clearly the most difficult challenge facing every politician in America today.

However, what happens when the bad actor is your own son?  Truly, Hunter turned out to be Joe’s Achilles’ heel in this regard; and there was practically no way Joe could avoid the oncoming train wreck because of this catastrophic relationship. See: “Biden created 1 job in 47 years. It was for Hunter.”

It’s not like “Old Joe” was a saint, mind you; for his pedophilia behavior was often on full display as the many YouTube videos have presented over years of filmed child harassment and/or abuse.  If this is how Joe acts in the hallowed halls of the White House and Capitol Building, just imagine what took place in the privacy of his own home and secret offices.

Joe Biden was accused of not just sexual assault but RAPE! (Video)

Quite stunningly, Vice President Joe Biden was so cavalier about how he carried out his various criminal plots that he was actually content to get on stage (a Council on Foreign Relations forum) and be filmed describing the actual Ukraine crime scene along with his patently criminal official misconduct. See: Here’s Vice President Joe Biden Describing His Criminal Acts vis-à-vis the Ukraine

“The apple doesn’t fall far from the tree”

In the case of Hunter Biden we see that a rotting tree can only produce a rotten apple.  Given the now notorious cache of telling emails, it’s clear that Biden & Sons were running an international shakedown racket.  As long as the incorrigibly lawless Barack Obama was POTUS, Biden & Biden really felt they could shale down any government on Earth.

Truly, Joe Biden along with henchman Hunter give new meaning to gunboat diplomacy abroad and graft at home.  Wherever these 2 con men did their business together there was sure to be a long trail of bribery and blackmail, payola and extortion.

As a chip of the old block, Hunter especially shared one thing with his perpetually plagiarizing father—he has never held a real job.  As a lifelong politician, Joe Biden demonstrated he was completely incapable of doing an honest day’s work.  Likewise, son Hunter followed perfectly in dad’s footsteps as he was given con job after con job to engage himself with, each being the product of sheer political influence.

In view of the aftermath of damage, it appears that Hunter embraced all of these opportunities to swindle and scam in such a way that he truly shined in his father’s eyes.  This is simply what highly corrupt career politicians hope for form their children: that they will take advantage of the influence-peddling and graft while the political winds are still favorable. See: Joe Biden gets a 50% cut from son Hunter and brother Jim.