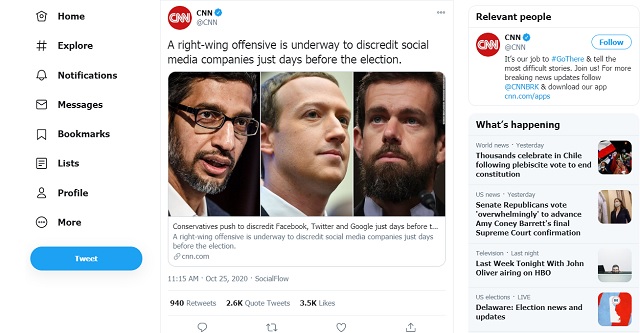 Big Tech seizing control of our entire election apparatus, banning right-wing dissidents en masse, rigging search results, giving billions-worth of in-kind contributions to Democrats and tens of millions directly to get-out-the-vote campaigns in Democratic strongholds, and censoring news stories to protect Joe Biden and help defeat Donald Trump is nothing to worry about — the real threat is conservatives complaining about it online!

A right-wing offensive is underway to discredit social media companies just days before the election. https://t.co/CSebdA4bMQ

Here’s how the piece opens:

What began as complaints about anti-conservative censorship by social media companies has now evolved into outright allegations of election interference, as high-ranking Republicans have accused online platforms of helping Democrats by way of their content moderation decisions. On Wednesday, the Senate Commerce Committee is set to grill the CEOs of Facebook, Google and Twitter amid right-wing cries of partisanship and threats to change a critical law, known as Section 230, that protects the companies’ ability to moderate content as they see fit.

Outside experts have found little evidence to support claims of widespread, systematic political bias in Silicon Valley’s technology. But the conservative allegations are an explosive charge and a dramatic escalation ahead of Election Day.

A right-wing offensive is underway to discredit social media companies just days before the election. https://t.co/CSebdA4bMQ

Fung makes no mention of Facebook and Twitter censoring the New York Post’s exposé of Joe and Hunter Biden’s shady dealings in Ukraine and China and banned people for sharing it (the NY Post’s Twitter is still locked).

He also makes no mention of the fact(s):

– Twitter and Facebook boosted the story of Rudy Giuliani supposedly touching his junk sexually to millions only to turn around days later and censor everyone for sharing (censored) footage of Hunter Biden’s crack-smoking sexcapades.

– CNN personally lobbied Facebook and Twitter to ban Alex Jones and many others who are their competitors and critics.

– YouTube has boasted about banning tens of thousands of dissident channels, including all the most popular right-wing personalities who helped Trump win in 2016.

– Google rewrote all their search algorithms and hired a 10,000-strong “army” of flaggers to blacklist all independent media while boosting propaganda mills like CNN, The New York Times and The Washington Post above all others.

Instead Fung writes that, “Independent studies of social media have found little credible evidence to suggest that the technology is biased against right-wing viewpoints” and claims “the platforms themselves have gone out of their way to help conservatives”!