In the video, a woman can be seen standing outside of someone’s door and making threats because the person inside changed their wifi password.

Neighbors that live close to one another, especially in apartment buildings and developments, will often try to steal wifi from someone nearby if they don’t have access to their own.

Usually, this is an unspoken thing that people try to do in secret, or in the rare case that they do actually interact with their neighbor about it, they might ask politely for the password.

However, there are definitely some crazy people out there who don’t know how to act, and there is no doubt that plenty of fights have probably started over this issue.

A video recently posted to TikTok claims to have captured one of these altercations. In the video, a woman can be seen standing outside of someone’s door and making threats because the person inside changed their wifi password.

The woman was angry that she was unable to sign in so she began making threats. In the video, the angry woman threatened to assault the person recording the footage, and even threatened to kill their dog.

Content Hub on TikTok shared the video in two parts over the weekend, and dubbed the angry woman “Karen,” although that is not believed to be her real name.

Some posts about the story have suggested that this woman is outside of her landlord’s home, and that their internet was actually not available at the time of the altercation. It is hard to say for sure because both people in the video seem very confused.

“I live here! It’s illegal. Come outside, let’s talk. Give me the f****** Wi-Fi before you get arrested, and your mom,” Karen can be heard yelling from her neighbor’s doorstep.

When the neighbor doesn’t respond and continues to record the outburst, Karen starts threatening the animals inside.

“You want me to try that way, or you want your dog to come dead? I have ways in, and your dog won’t be breathing tomorrow. Dog. Doggie? Dead. You’re not gonna f*** with me. Because when you’re outside by yourself one day, you’re gonna be f***ed,” she shouted as she made a slicing motion across her neck.

Karen then threatened to poison the dog, and claimed that it’s “not against the law” because it’s “not a human being.”

Not much else is known about the people in the video or where it was filmed.

There is an entire industry devoted to YouTube pranks and hoaxes, so without more background knowledge of this incident or the people involved, it is hard to verify the authenticity of the video, but it does not appear to be staged, and most commenters seem to believe that it is real. 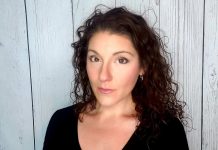