Thursday the Fed signaled that interest rates would stay near zero until 2024, but that was apparently not enough. As one money manager sotted with Monetary Cool-Aid bleated,

“The Fed said it would keep rates low for ages. But that’s not enough,” said James Athey, senior investment manager at Aberdeen Standard Investments. “Not taking away is no longer sufficient for this market. You need to do more, more, more.”

The Fed did say that it would continue buying $120 billion of government and GSE paper per month for the indefinite future. That amounts to monetizing $1.44 trillion per year, meaning that in less than two years the Fed’s balance sheet will vault above the $10 trillion mark.

For want of doubt, that would essentially amount to $10 trillion of official financial fraud – 95% of which would have been accomplished since the turn of the century when the Fed’s balance sheet stood at just $500 billion after the first 86 years of its existence.

Likewise, how do you get “more” on the rate front when during the last 152 months (since February 2008) the Fed’s policy target rate (brown line) has been below the running inflation rate (purple line) in all except seven months. That means rates were negative in real terms 95% of the time.

And now they are pledging to tack onto that at least another 40 months of deeply negative real rates. That is to say, the geniuses in the Eccles Building are promising nearly 17 years running in which the Wall Street money market will function as a candy store for dealers, speculators and carry traders.

After all, the overnight and short-term money markets are not where operating businesses borrow to fund their working capital or where households borrow to finance the purchase of new autos, washing machines and trips to Disney World. Instead, that’s where Wall Street dealers fund their massive inventories of inflated stocks and bonds, speculators obtain repo funding of their asset books and options writers implicitly fund the carry cost of open positions.

Long ago Wall Street was transformed from an honest capital and money market into a giant gambling casino, but the prospective 17 straight years of negative real rates are now morphing it into a veritable devils workshop. Our lunatic central bankers apparently will not stop egging on the traders and speculators until the actually blow up the entire financial system.

Moreover, when we say negative real rates, we are not talking about marginalia, or money rates that are a few basis points under the inflation water-line. As is evident in the chart, we are already back to the extreme of January 2012, when the gap between CPI inflation (2.60%) and the effective Federal funds rate (0.08%) was –252 basis points.

Of course, that bit of insanity was justified as a once in one-hundred years expedient to kick-start an economy that had been mauled by the Great Recession. But here we are back at a real yield in the money markets of -250 basis points, meaning that the 12-year average real money market rate stands at negative -135 basis points, and will be extended at the level or even deeper for another three years. 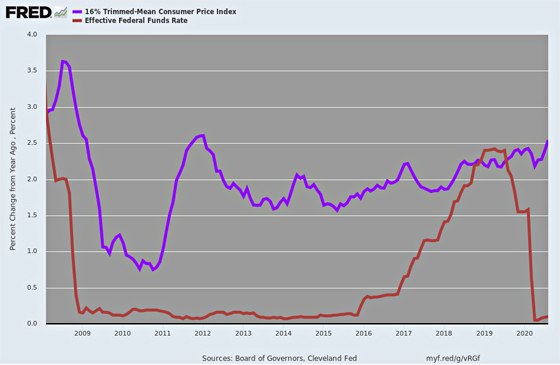 The above chart is tantamount to a criminal indictment of today’s Keynesian central bankers. It means that savers are being savagely punished and expropriated, even as speculators skim massive dead-weight rents from the the securities markets. It amounts to a stupendous wealth transfer from the productive masses to the top 10% and 1% of households, which own 88% and 55% of these vastly inflated financial assets, respectively.

Of course, the lunatics domiciled in the Eccles Building pay no never mind to the chart above or to the capricious and destructive wealth transfer to the already rich which they intermediate. That’s because deeply embedded in their oppressive group-think is the erroneous presumption that “lower for longer” supports the main street economy, thereby fostering more growth and jobs than would otherwise happen on the free market left to its own devices .