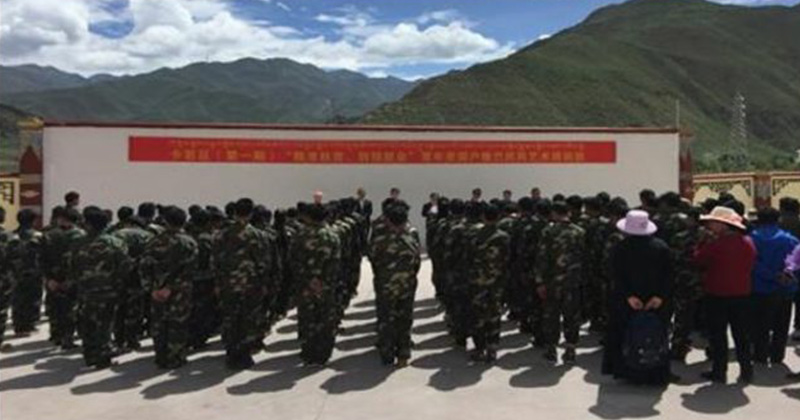 China aims to eliminate ‘the negative influence of religion’

Research by a German anthropologist has found evidence of China forcing over half-a-million Tibetans into labor camps similar to the prison-like facilities where Uyghurs are being held in the communist nation’s Xinjiang region.

According to Dr. Adrian Zenz’s findings, over 500,000 Tibetans were placed in the military-style training centers in Tibet between January and July of 2020.

Dr. Zenz was instrumental in bringing to light the millions of Uyghurs being mistreated in Chinese labor camps.

Those camps have even been accused of harvesting organs of detainees to sell on black markets.

Referring to the newly revealed research on the Tibetan labor camps, The Sydney Morning Herald reported, “The labour camps are accompanied by enforced indoctrination, intrusive surveillance, and harsh punishments for those who fail to meet labour transfer quotas.”

Beijing has allegedly set a quota for how many Tibetan pastoralists and farmers are to be transferred to the camps.

Upon arriving at the facility, prisoners are forced into a “military-style” vocational training focusing on eliminating “backward thinking,” otherwise known as re-education.

The captives are also trained in “work discipline,” law, and how to speak, read and write in the Chinese language Mandarin.

A camp in the Chamdo region of the Tibet Autonomous Region (TAR) is reportedly being supervised by People’s Armed Police drill sergeants.

The state claims the purpose of the camps is to “stop raising up lazy people,” and to ultimately dilute “the negative influence of religion.”

Tibetan farmers and ranchers are also being “encouraged” to sign their land and herds over to government-run cooperatives which then turn the former land-owners into wage laborers.

Intrusive social control technology used to identify and select which Uyghurs were to be sent to camps is being used in Tibet as well.

The similarities to Xinjiang’s coercive training scheme are abundant: both schemes have the same target group (‘rural surplus laborers’) a high-powered focus on mobilizing a ‘reticent’ minority group to change their traditional livelihood mode; employ military drill and military-style training management to produce discipline and obedience; emphasize the need to ‘transform’ laborers’ thinking and identity, and to reform their ‘backwardness;’ teach law and Chinese; aim to weaken the perceived negative influence of religion; prescribe detailed quotas; and put great pressure on officials to achieve program goals.

“The transferred laborers’ ‘left-behind’ children, wives and elderly family members are to receive the state’s ‘loving care,’” the foundation added.

This shocking revelation will surely add to calls for the global community to address the cruelty of Xi Jinping’s government.

Dr. Zenz’s report is sponsored by 63 government officials around the world who are urging their governments to take action against the authoritarian Chinese regime.