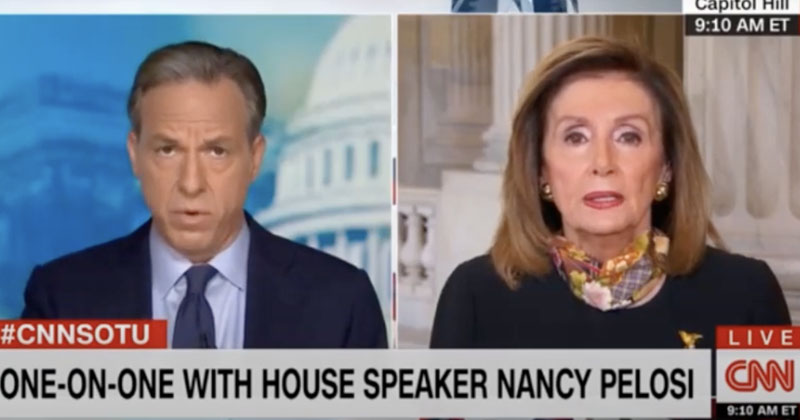 House Speaker Nancy Pelosi refused to directly answer whether or not Democrats are considering impeaching Attorney General Bill Barr in an effort to stall the Supreme Court confirmation of Amy Coney Barrett.

CNN host Jake Tapper asked Pelosi on Sunday if she shared the same view as Rep. Alexandria Ocasio-Cortez (D-N.Y.) related to impeaching Barr as a way of stalling the confirmation process before Election Day.

“So, Speaker Pelosi, it sounds as though you’re almost resigned to the fact that Judge Barrett will become Justice Barrett. And you’re saying very clearly that your message to viewers right now is vote, vote, vote — vote November 3 or early voting or whatever,” Tapper said.

“That would seem to suggest that you are not on the program when it comes to individuals like Congresswoman Alexandria Ocasio-Cortez, who this week did not rule out this long-shot effort to try to stall the confirmation of Judge Barrett by impeaching Attorney General Bill Barr. Now, you haven’t ruled it out.”

“Well, I’m not familiar with what suggestion of the distinguished congresswoman made,” Pelosi replied. “The fact is, the more the public is aware of what this appointment—and, by the way, it’s not about this justice. It’s about any justice he would appoint right now because they were ready within an hour or two of Justice Ginsburg’s passing, they said we’re going to have a vote on this. Within like two hours. So whoever it is is to overturn the Affordable Care Act.”

Tapper again tried to get Pelosi’s answer: “But yes or no, you’re not planning on bringing an impeachment of Attorney General Barr?”

“Well, what is the use of talking about that?” Pelosi asked. “What we’re talking about is the price the Republican senators will pay if they vote to overturn the pre-existing medical condition, which they’ve been out to get as well as the president had been out to overturn. Now I’m not into the process. I’m into the policy. But I do want to point out that they have totally misrepresented their position on this. In fact, you could say they are lying.”