This article examines two inflationary experiences in the past in an attempt to predict the likely outcome of today’s monetary policies. The German hyperinflation of 1923 demonstrated that it took surprisingly little monetary inflation to collapse the purchasing power of the paper mark. This is relevant to the fate of the “whatever it takes” inflationary policies of today’s governments and their central banks. The management of John Law’s Mississippi bubble, when he used paper money to rig the market is precisely what central bank policy is aimed at achieving today. By binding the fate of the currency to that of financial assets, as John Law proved, it is the currency that is destroyed.

At the outset, I shall make a point about the relevance of the chart below, a screengrab from Constantino Bresciani-Turroni’s The Economics of Inflation[i], which has been frequently reproduced and will be familiar to many who have read about Germany’s post-First World War inflation. 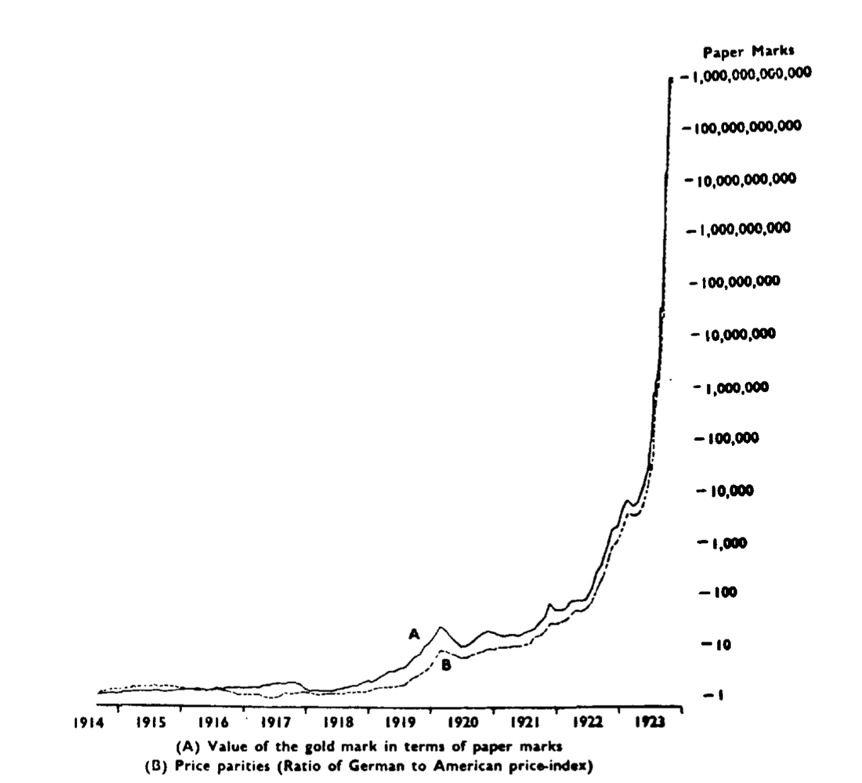 Looking at the progress of the collapse of the paper mark from its parity with the gold mark, we can take a punt on where the dollar might be today on this scale. The dollar has lost 98.2% of its purchasing power since the failure of the London gold pool in the late 1960s. That puts the dollar at 56 on the chart, which is approximately the equivalent of Germany’s paper mark valuation relative to gold in the first half of 1922. If it follows the same course as the paper mark, in five- or six-months’ time it will be 100 and in ten- or twelve-months about 12,000. Instead of the paper mark’s original pre-1914 parity to the gold mark, the dollar started at $35 to the ounce, so the gold price in dollars would be $1960, $3,500 and $42,000 respectively. The final price at which the German inflation was stopped on 20 November 1923 when it was fixed to the rentenmark at a trillion to one would be the equivalent today of $35 trillion to the ounce.[ii]

Playing around with figures like these is not a replacement for sound reasoning, but it does impart an interesting perspective. A better understanding of the possible demise of the unbacked dollar is not to think of the numbers of dollars per ounce of gold rising or gold potentially hitting $42,000 within a year, a seemingly ridiculous number, but to think of gold as being broadly stable while the dollar loses its purchasing power. The presentation of an impossibly steep and accelerating uptrend is less believable than a collapsing one. Furthermore, the commonality of the paper mark and the dollar is that they were and are unbacked state-issued currencies liable to the same influences, a fact the consequences of which are becoming increasingly apparent.

For the paper mark it all started in 1905, when a German economist and leader of the Chartalist movement, Georg Knapp, published a book whose title translated as the State Theory of Money. Thus encouraged, under the direction of Bismarck the Prussian administration financed the military build-up to the war to end all wars by utilising the state’s seigniorage. And when Germany lost, any thoughts of raiding the wealth of the vanquished came to nought. Instead, it was Germany that faced reparations and a post-war crisis. Just as the Fed is responding to the covid crisis today, the answer was to print money. Monetary inflation became the principal source of government finance, just as it is now in America and elsewhere.

There is hardly an economist today who does not condemn the Reichsbank for its inflationary policies. Yet they are supportive of similar monetary policies by the Fed, the European Central Bank, the Bank of Japan and the Bank of England. We should compare the stewardship of Rudolf Havenstein at the Reichsbank with that of Jay Powell, who after reducing interest rates the previous week, on 23 March issued an FOMC statement promising an inflationary policy of “whatever it takes”. And Rishi Sunak, the British Chancellor, used the phrase multiple times in his emergency budget.

But there is a difference. Today, alternatives to inflationism are never discussed amongst policy makers, who are like a blind cult believing entirely, with only minor variations, that monetary inflation is the cure for all economic ills. At least in Germany, the actions of the government were the subject of wider debate both in Germany and without, even though the answers were mostly ill-informed.

Part of the problem was the quantity theory of money was dismissed in a confusion between cause and effect. As Bresciani-Turroni put it, a great number of writers and German politicians thought that government deficits and paper inflation were not the cause, but the consequence of the external depreciation of the mark. A financier, politician and one of the leading German economists at the time, Karl Helfferich put it this way:

“The increase of the circulation has not preceded the rise of prices and the depreciation of the exchange, but it followed slowly and at great distance. The circulation increased from May 1921 to the end of January 1923 by 23 times; it is not possible that this increase had caused the rise in the prices of imported goods and of the dollar, which in that period increased by 344 times.[iii]”

As well as dealing with the post-war economy and the capital dislocation that needed to be corrected, there was the burden of reparations. Many blamed the collapse of the paper mark on the latter, which is an inadequate explanation, when the Austrian crown, the Hungarian crown, the Russian rouble and the Polish mark all collapsed at roughly the same time.

Having resorted to monetary inflation as the means of marginal finance it rapidly became the principal source of government revenue. The German authorities then observed a dislocation between the increase in the quantity of money and the effect on its purchasing power, as described by Helfferich. It was taken as evidence against the quantity theory, as expounded by David Ricardo a century before, and upon which Peel’s Bank Charter Act of 1844 in England was based. Clearly, the dismissal of the quantity theory paved the way for more inflationary financing in 1920s Germany in the manner of today’s monetary planning. It led to the observation that the money supply was insufficient for an economy faced with rapidly escalating prices for imported goods.

The disparity between increases in the money supply in Germany and the effect on the paper mark’s purchasing power was so great that the accuracy of the underlying numbers does not matter. But today, while we can presumably rely on monetary statistics being reasonably accurate, the statistics that reflect the effect on prices are not. Today’s suppression of increases in the general price level simply disqualifies any statistical analysis, and in that sense, Helfferich’s observation is a more honest appraisal than those of today’s monetary planners.

On the surface, his deduction appeared to have some merit. He goes on to say,

The starting point in this logic is it is never the government’s fault but always the fault of external factors and markets. And doubtless, as the dollar declines in the foreign exchanges over the coming months and commodity prices rise, we shall continue to see similar arguments embedded in future FOMC statements.

The error common to both is to misunderstand the underlying subjectivity of money. Money takes its value from the marginal value placed upon it relative to owning goods. If money is widely regarded as sound, an economising man is happy to hold a reserve of it, only exchanging it for goods and services when they are needed. This is the most important quality of metallic money, to which people have always returned when government money fails.

A further benefit, which state currencies lack, is that gold and silver as money are accepted everywhere, having the same values in New York, London, and Mumbai. With the exception of cross-border trade, investment, and perhaps longer-term strategic considerations, government currencies are generally restricted to national boundaries. Paper currencies are therefore vulnerable to changes in demand in the foreign exchanges in a way gold and silver are not; if the foreigners don’t like your currency, they will reduce their exposure by selling it, irrespective of fundamental considerations.