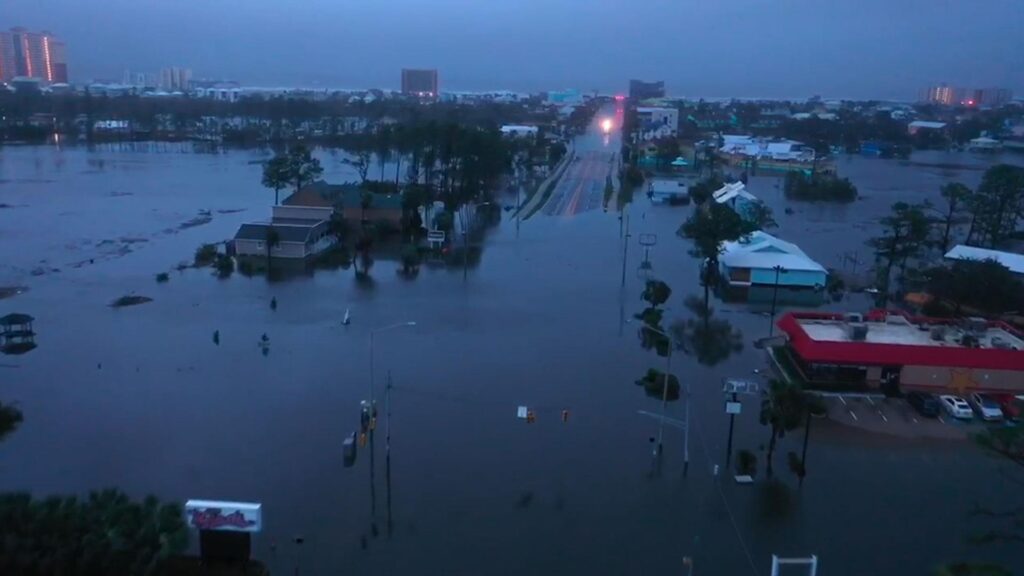 Geoengineers aimed Cat. 2 Hurricane Sally at Pensacola just like Cat. 3 Hurricane Ivan was during 2004 election cycle, and on the very same date—September 16. Ivan was the second most destructive superstorm to hit North Florida in recorded history. Similarly, Sally has caused catastrophic flooding throughout the western Panhandle that will worsen as the swollen rivers crest.

On October 10th of 2018, the New World Order globalist cabal directed their geoengineer weather warriors to slam a Category 5 hurricane-tornado into the Florida panhandle less than a month before the midterm elections.  Clearly, their intention was to swing the outcome of the highly consequential elections occurring throughout the Sunshine State, especially the governor race.  The following exposé breaks down that conspiratorial plot in great detail.

The explicit intention of the globalists in 2018 was to incapacitate as many Republican voters as possible in an effort to see Tallahassee Mayor and Democrat Andrew Gillum elected governor.  In this way, Deep State planned to use Gillum to fix the outcome of the 2020 POTUS election on November 3rd in Tallahassee.  After all, every political pundit knows that whoever wins Florida’s 29 electoral votes always wins POTUS.

Political insiders knew that, with a Democrat governor installed in Florida Governor’s Mansion, it would be much easier to steal the upcoming most important election in U.S. history.  Not only was Soros-funded Candidate Gillum overwhelmingly unfit for high office, he was eventually shown to be highly compromised and willing to do whatever his globalist masters ordered. See: This is exactly how they control and coerce politicians like former FL Democrat governor candidate Andrew Gillum.

The only reason why the 2020 hurricane season has been repeatedly predicted to be the worst ever is because the globalist-directed geoengineers are working overtime to fabricate these Frankenstorms.  In other words, the electorate is being relentlessly gaslighted in advance of the transparent weather warfare in order that everyone will simply accept that these are natural disasters.  They are natural.  Yes, some of them may be, but then they are purposely amped up into megastorms.

While any one of the 3 aforementioned superstorms may have started out as acts of Mother Nature, the geoengineers are notorious for hijacking them, then increasing their size and intensifying their power, and then aiming these devastating weather weapons into a targeted city of state.

For the uninitiated, the NWO globalists have been waging this type of weather warfare across the planet for several decades.  Their primary target in 2020, however, is the United States of America.  Hence, the American people can expect more superstorms lashing at strategic electoral locations around the prime battleground state of Florida, as well as the pivotal swing state of Texas.

The globalist perpetrators are exceedingly desperate to rig this election by any means possible even if it means destroying an entire state as they are doing to California, America’s new Charcoal State.  See: OPERATION TORCH CALIFORNIA: NWO Pyro-terrorists Geoengineering Massive Firestorms, Triggering Wildfires with DEWs

KEY POINTS: Many folks wonder why the cabal would literally burn down a whole state, especially one that’s so compliant in carrying out the New World Order agenda.  The Hollywood celebrity society is basically being coerced to zealously promote the climate change narrative on pain of having their gated communities torched.  Similarly, the Sultans of Silicon Valley are being relentlessly terrorized to implement every single violation of free speech necessary in order to shut down the Right to ensure a Biden victory. (See: Apocalyptic Orange Sky Over San Francisco Foreshadows the Doomed Future of Silicon Valley)  Even the former CA globalist governor Jerry Brown is putting out a unusually dark and gloomy message: Former CA Governor Jerry Brown is finally receiving his comeuppance.

At the end of the day, it’s the expeditious implementation of the UN agendas that reign supreme across America.  These directly concern the leadership of the Deep State, the Democrat Party and the NWO globalists, who are all colluding to collapse the American Republic.  The successful completion of both Agenda 21 and 2030 Agenda for Sustainable Development in all 50 states is critical toward the ultimate goal of establishing a One World Government.