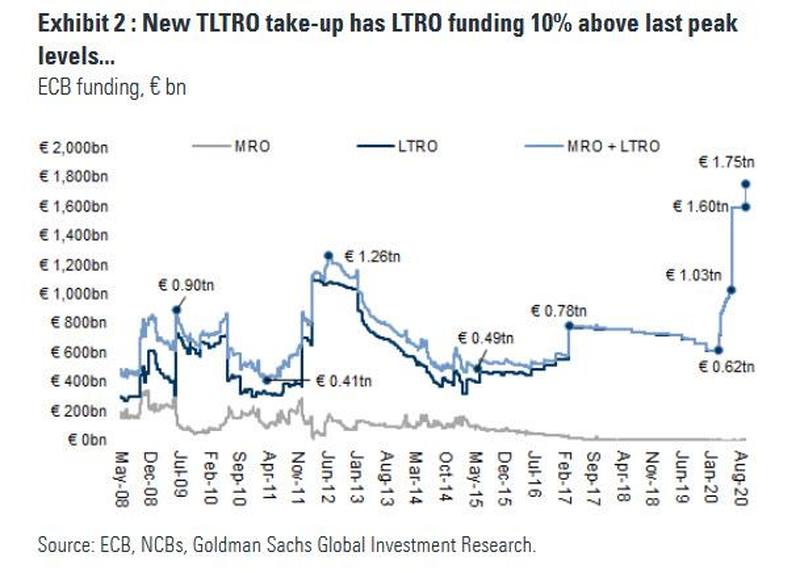 Today was one of those iconic days that defines the new centrally-planned paranormal, where as a result of such monetary abortions as negative rates, the ECB pays European banks to give them money. We are talking of course about TLTRO day, when the ECB lends to banks at rates as low as -1% to try to encourage them to lend to households which are about to be locked down again.

And so, after €1.3 trillion was the taken-up last time three months ago, today Euro-zone banks took up just €174.5 billion, or $203 billion, in the latest TLTRO even as the ECB gave banks every possible incentive to keep lending to the pandemic-stricken economy, including rates as low as -1%. In other words, the ECB is paying banks to take cash which they should then lend out, at least in theory. According to Bloomberg, this suggests that “most lenders now consider themselves well-financed.” 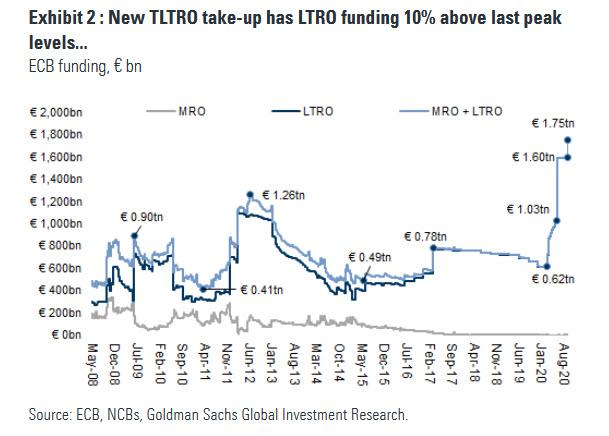 … and was priced at -1% for Year 1, and -0.5% for Years 2-3. As such these loans fully compensate banks for the official policy rate of minus 0.5%, which works as a charge on their reserves and erodes their profitability. Without TLTROs as a counterbalance, that could eventually curb lending. Instead the ECB is effectively paying banks to lend. On the other hand, with the ECB almost fully offsetting the punitive effects of negative deposit rates, one wonders why the ECB still pretends to have NIRP?

The TLTRO3 bids came from 388 banks, and the takeup was at the high end of economists’ expectations, if well below the June TLTRO. The high participation and ample usage confirms that there is still no stigma associated with use of the facility (that may change).

A couple of observations from Goldman:

According to Bloomberg, the loans will likely push excess liquidity in the euro zone above 3 trillion euros for the first time on record.

According to Piet Christiansen, chief strategist at Danske Bank A/S in Copenhagen, excess liquidity will rise by another 600 billion euros to 800 billion euros by the summer of 2021.

To be sure, flooding the market with all this negative-yielding debt has adverse consequences besides merely blowing asset bubbles. According to Bloomberg, the ECB could undermine its own influence over short-term market rates. Three-month Euribor – the rate at which banks can theoretically borrow from one another – fell to a record low of minus 0.508% this week.

When it dropped below the ECB’s policy rate last week, that was a phenomenon that had happened only once before, in August 2019, shortly before the central bank cut its deposit rate. Euribor futures, which reflect the three-month benchmark rate held small gains following the announcement, a sign borrowing costs may fall further.

A record €3 trillion in excess liquidity however is probably not enough for Europe’s bank and more stimulus is coming. The ECB projects that the economy will contract 8% this year, and the inflation rate has fallen below zero for the first time in four years. Rising coronavirus infections could worsen the outlook. Economists predict the €1.35 trillion pandemic bond-buying program will be expanded again this year. Meanwhile, markets aren’t pricing another 10 basis-point rate cut until October 2021.

In any event, Goldman concludes that this auction was supportive of overall financial stability, “and on the margin supportive of bank revenue. The next auction, on the same terms, is on December 10, with subsequent auctions running quarterly until March 2021.” A more sarcastic take comes from Rabobank’s Michael Every, who writes: