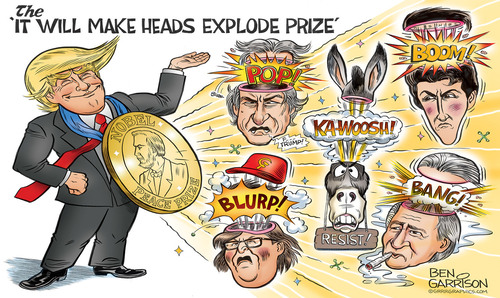 President Donald Trump has been nominated to receive the Nobel Prize for his work with Israelis and Muslims in the Middle East. This possibility has left knees jerking all over America and Europe. Note, they were left knees. Of course, Obama was given the same prize for doing—well, for breathing. Even some honest liberals (a vanishing breed) are still embarrassed with that fiasco.

The Nobel Peace Prize has lost its luster.

Palestinian terrorist leader Yasser Arafat was given the peace prize prompting a member of the committee Kåre Gudbrand Kristiansen to resign. In an article for the Times of Israel in 2012, American columnist Jay Nordlinger called Arafat “the worst man ever to win the Nobel Peace Prize.”

Most uninformed people think the Nobel Prize is the epitome of accomplishment but let me remind you that it has been given to the Larry, Curly, and Moes of this world. It is now a joke to informed people since, in recent years, it has become a farce, fraud, fake, and fatuity (unintelligence, silliness)! However, the problem is that most people don’t know much about the Nobel Prize other than it is supposed to be the highest honor a person can receive.

The Nobel Peace Prize stands for, well, nothing. The past prize holders are a gaggle of terrorists, two-faced politicians, empty suits, and malefactors. And a handful of worthies.

(ANP Fundraiser: If you like stories like this, please consider donating to ANP to help keep us in this ‘Info-war’ for America at this most critical time in US history as we approach the 2020 election during a time of systematic ‘big tech’ censorship and widespread Democrat corruption) 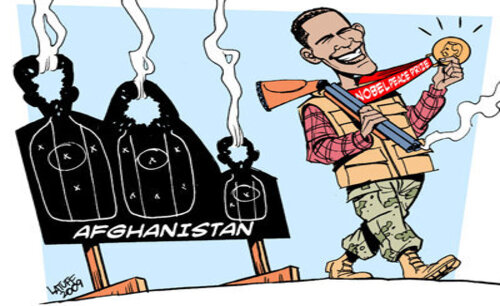 Alfred Nobel died in 1872, leaving most of his fortune to establish prizes as determined by various committees in Sweden and Norway. The Peace Prize is determined by members of the Norway Parliament. The professions to be honored for exceptional accomplishments were physics, medicine, chemistry, literature, for work in peace, and now economics. So far, so good.

Al made his fortune by inventing dynamite, an invention that changed the face of the world for good and evil. It is interesting that he almost called his invention “Nobel’s Safety Powder”! What a misnomer! He also developed “Gelignite,” a blasting gelatin that made drilling much more efficient and less expensive. Money started piling up in his bank account.

However, a French newspaper erroneously printed his obituary, confusing him with his deceased brother, and characterized Al as a “merchant of death” because of the deadly use of dynamite in warfare. The paper wrote, “The merchant of death is dead” and went on to say, “Dr. Alfred Nobel, who became rich by finding ways to kill more people faster than ever before, died yesterday.” He was horrified that he would be remembered in such a manner and instituted the Nobel Prizes to provide him a positive legacy. It worked.

Since 1900, many more or less deserving people have received the awards such as Teddy Roosevelt, Woodrow Wilson, Shimon Peres, Yitzhak Rabin, William Faulkner, T. S. Eliot, Ernest Hemingway, Samuel Beckett, Pierre, and Marie Curie, Max Planck, and Albert Einstein. Pierre and Marie Curie, along with their daughter and her husband, won five prizes, although Marie, when a widow, had an affair with a former pupil of her dead husband. Love letters were discovered and printed in a newspaper, and she was pressured to refuse the prize; however, she accepted it, saying her private life had nothing to do with her profession.

Le Duc Tho, a bloody communist of Vietnam, was awarded the 1973 Nobel Peace Prize, although he refused the prize because peace had not been established in Vietnam. President Obama accepted the prize even though he is an “empty suit” and may be the least qualified person to be nominated. Yet, he accepted the award. It seems some people can’t blush anymore.

Was Le Duc Tho more principled than Obama?

Others who received the Peace Prize include Martin Luther King, Jr., Mikhail Gorbachev, Nelson Mandela, Yasser Arafat, Jimmy Carter, and Al Gore. An observation: It seems that to qualify for the peace prize in modern times, one must be incompetent, a communist, a terrorist, or a socialist. All right, maybe one doesn’t have to fit into one of those categories, but it sure seems to help.

Martin Luther King, an admitted serial fornicator and major plagiarist accepted the prize in 1964. It is further enlightening of his character (or lack thereof) to note that when he went to Norway to accept the Nobel Prize, he was caught drunk, running naked down a hotel hallway trying to catch a woman and was stopped by the police as reported by Alan Stang in his January 21, 2008 column.

Nelson Mandela was a former president of South Africa, member of the Communist African National Congress, and hero to most people, but as a young man, he was arrested and spent 27 years in a South African prison not as a civil rights fighter but for sabotage (and other crimes). When arrested, he had on his person an article in his own handwriting, “Why I am a Good Communist.” The white South African government offered him his freedom many times if he would renounce terror and violence, but he refused and continued his prison sentence and enhanced his reputation as a weird kind of martyr.

Some Nobel winners have been a major embarrassment to the memory of Alfred Nobel, such as Daniel Carleton Gajdusek, who won in 1976 for his research in human slow-virus infections. Daniel spent 19 months in jail after pleading guilty in 1997 to charges of child molestation. Then there was Johannes Fibiger, who won in 1926 for discovering that parasitic worms cause cancer; however, that turned out to be totally false!

The Nobel Peace Prize is to recognize “the most or the best work for fraternity between nations, for the abolition or reduction of standing armies and for the holding and promotion of peace congresses.” Evidence is abundant that it has failed to live up to those standards. 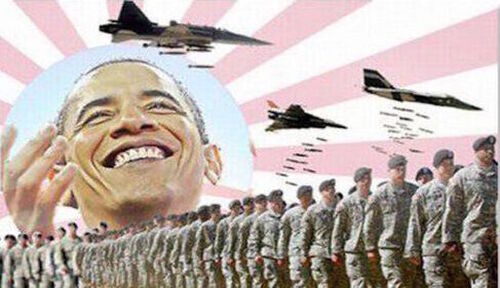 Dr. Damadian is the inventor of the MRI scanner (that has saved hundreds of thousands of lives), yet the Nobel committee gave the prize to two other scientists who helped him! The award can be bestowed to as many as three people for the same work, yet they purposefully refused to honor Damadian! Question: Could the Prize committee’s refusal to honor him be because Damadian belongs to an Independent Baptist Church and is a young-earth creationist? No, surely not. That would be, well, bigotry and unprofessional and prejudicial, and the black-tail, white-tie Nobel committee could never be guilty of such sins. Could such people be undisguised, unashamed, unfeeling, unaccountable hypocrites?