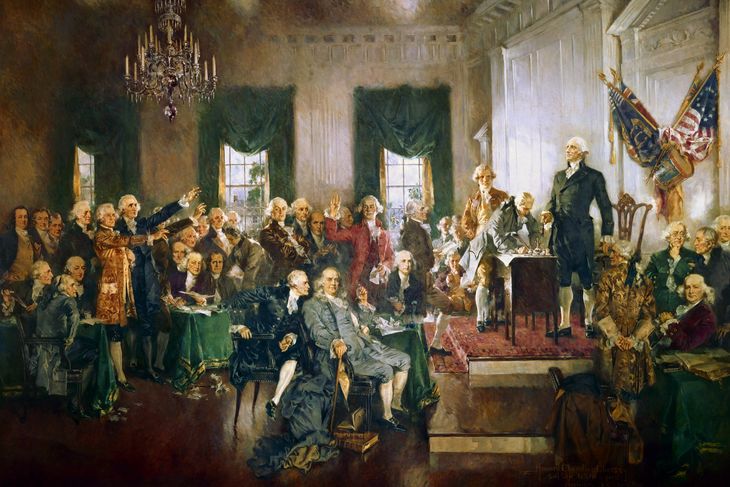 With each passing day, it seems Americans are more and more at each other’s throats. Black Lives Matter mobs accost people sitting outside at restaurants. Pro-mask and anti-mask agitators accost one another in grocery stores, even wishing death on toddlers over debates about the coronavirus pandemic. Republicans and Democrats each fear the other side is trying to interfere with the sanctity of the vote in the 2020 election, and it seems the stakes have never been higher. Predictions of a protracted and uncertain election have sparked concerns about a potential civil war that seems to have started on the streets of Portland and Kenosha.

In the midst of this chaos and fury, it seems America is ripping apart at the seams. But there is perhaps no better time than the present to deliver a full-throated defense of the system that holds all these passions in check.

The United States of America was not designed to be a winner-take-all system where a 50-percent-plus-one majority calls all the shots and rolls over the rights of the minority. We cannot always get what we want — and that is a good and vitally important feature of the system built upon our magnificent Constitution.

The Founding Fathers drafted a genius system to give the majority the power it rightly demands while seeking to protect the rights of those with far less political heft. That system frustrates both the Left and the Right in different ways, but the system itself is vitally important — especially with tensions as high as they are.

Democrats, believing they have both the true majority of voters and the moral imperative to enforce their will on the country, openly plot about changing the rules of the game. When they took control of the House in 2019, they drafted legislation to abolish the Electoral College. When the Senate confirmed Supreme Court Justice Brett Kavanaugh, some responded by demanding the abolition of the Senate. After President Donald Trump nominated originalist justices to reverse some of the liberal activist Supreme Court rulings of past decades, Democrats called for packing the Supreme Court.

The nefarious New York Times “1619 Project” provides more impetus for drastic attacks on the U.S. Constitution by insisting that America’s true founding came not on July 4, 1776 but in 1619, when the first black slaves arrived in Virginia. (In truth, slaves arrived in the future U.S. long before this date, but who says the project has to be historically accurate?) Redefining America as inherently racist is yet another attempt to undermine the Constitution.

Rejecting the Constitution would be a truly tragic mistake for either political party, and the Left’s rush to change the rules of the game is perhaps one of the strongest arguments against Democrats up and down the ballot. Americans should hold fast to the Constitution, and that means denying a future  — oh, sorry, I meant “Biden administration” — from teaming up with Democrats in Congress and altering the terms of the deal.

Americans should know the basic structure of the Constitution, but Constitution Day calls for a brief refresher.

The virtues of the Constitution

The U.S. federal government has limited powers, balanced by the Bill of Rights which reserves rights to the states and to the people. In the federal government, Congress makes the laws, the president and his administration enforce the laws, and the Supreme Court manages legal disputes.

Each of these “branches” of government must work within strict limits, and the other branches have the ability to restrain them. Congress consists of the House of Representatives (elected by popular vote to represent a congressional district) and the Senate (elected by popular vote to represent each state — in the Founders’ original version, the state legislatures elected senators). The Founders considered legislation the key power, and so they required both houses to agree for any bill to become law.

The Supreme Court adjudicates disputes between the two other branches.

Over the past 100 years, the Progressive movement chipped away at parts of the Constitution. In the New Deal, President Franklin Delano Roosevelt created a vast bureaucracy that effectively made law, usurping the legislative power from Congress. Congressional gridlock has made it more convenient for both parties to pass the buck on divisive issues to the administration or the Supreme Court.

Under the Constitution, issues like prohibiting discrimination on the basis of sexual orientation and gender identity — and the corresponding need to protect religious freedom — call for Congress to compromise and make law. But neither Democrats nor Republicans want to compromise, so the Trump administration has vocally defended religious freedom while the Supreme Court usurped its authority by redefining federal law and opening up a Pandora’s Box of thorny legal issues.