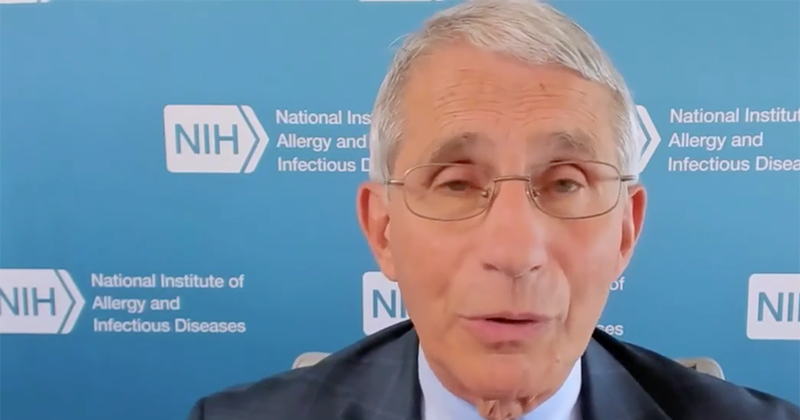 Agrees that ‘dangerous conspiracies’ must be countered.

Anthony Fauci dismissed the viral video of America’s Frontline Doctors promoting Hydroxychloroquine as a cure for coronavirus, describing it as “a bunch of people spouting something that isn’t true.”

Appearing on MSNBC, Fauci told host Andrea Mitchell “the only recourse you have is to be very, very clear in presenting the scientific data that essentially contradicts that.”

“The scientific data, the cumulative data on trials, clinical trials that were valid, namely clinically trials that were randomized and controlled in the proper way, all of those trials showed consistently that Hydroxychloroquine is not effective in the treatment of coronavirus disease or COVID-19,” Fauci claimed.

When Mitchell asked Fauci “don’t we have to do more to stop these dangerous conspiracies from misleading people?” he replied “Yeah, you’re absolutely correct, Andrea, and that’s the reason why I’m very explicit and unambiguous when we say we’ve got to follow the science.”

“If a study, that’s a good study, comes out and shows efficacy and safety for Hydroxychloroquine or any other drug that we do, if you do it in the right way, you accept the scientific data. But right now, today, the cumulative scientific data that has been put together and done over a number of different studies has shown no efficacy.” Fauci claimed, despite hundreds of doctors and medical experts backing Hydroxychloroquine.

Fauci, who has persistently claimed that face masks are effective against the virus, despite any robust scientific evidence, yesterday also claimed that everyone should be wearing goggles as well:

Dr. Anthony Fauci to @DrJAshton: “If you have goggles or an eye shield, you should use it. It’s not universally recommended, but if you really want to be complete, you should probably use it if you can.” https://t.co/SJPZn8fN6F pic.twitter.com/Ml87aBuclI

President Trump, who also promoted the Frontline Doctors video, and has consistently touted Hydroxychloroquine as effective, recently hinted at his disagreement with Fauci, noting that he routinely has to “overrule” Fauci, who would like to see the country remain “shut down” for an indeterminate amount of time.