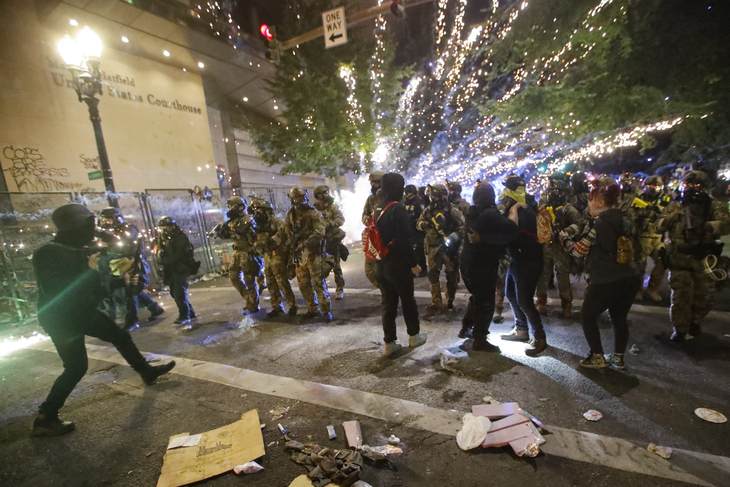 On Thursday, after the 68th consecutive night of violent riots in Portland, Mayor Ted Wheeler (D-Portland) finally urged activists who seriously desire police reform not to join the murderous and destructive antifa mob wreaking havoc in his city. Better late than never? While Wheeler finally issued a full-throated condemnation of the violence, he also warned rioters that they are “creating the B-roll film” for the campaign to reelect President Donald Trump.

Wheeler’s remarks on Thursday marked a clear departure from his previous tactic of blaming all the violence on the president. After Gov. Kate Brown (D-Ore.) agreed to dispatch state police to aid in the defense of the federal courthouse, the surplus federal law enforcement officers Wheeler and other Democrats had demonized left the area, leaving Wheeler no scapegoat to blame for the violence.

“Last night, 200 to 300 people went to East Precinct intent on violence. The purpose was to attack the East Precinct facility and the people therein,” the mayor said. He noted that “exits were blocked, they were barricaded shut,” and ” accelerants were set and used to grow fires.”

“The attack was immediate, it was intentional, and it was planned. It was intended to cause serious injury or death, and it very well could have,” Wheeler added. He noted that the police used tear gas, which “was authorized by every agency involved.”

#Antifa have started a fire on the front door of the Portland Police east precinct. They tore off the barricade and placed tinder around the fire. They’re trying to burn down the building. #PortlandRiots pic.twitter.com/2UN7o21dZy

“When you commit arson with an accelerant, in an attempt to burn down a building that is occupied by people that you have intentionally trapped inside, you are not demonstrating. You are attempting to commit murder,” the mayor insisted. “And by the way, this building is in a residential neighborhood.”