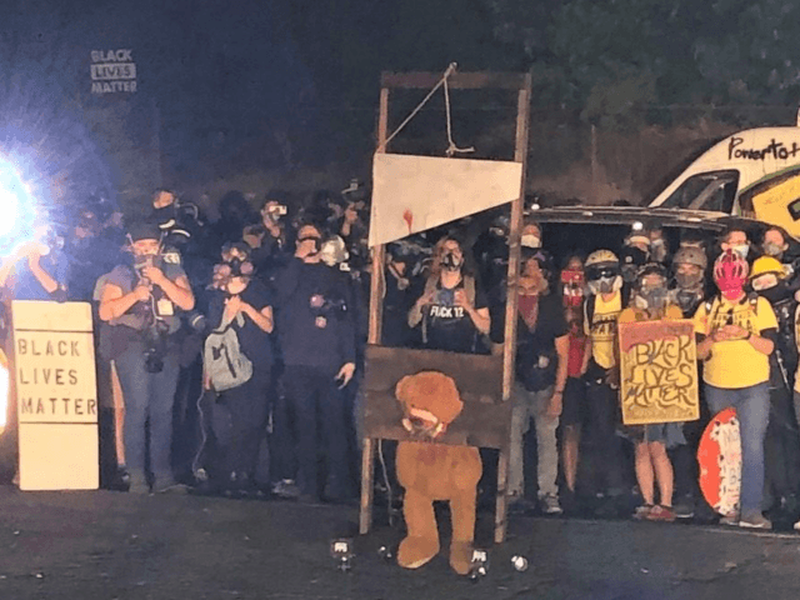 BLM protesters in Portland took to the streets once again Saturday night, dragging a mock guillotine through a suburban neighborhood, where they burned American flags and ‘executed’ a stuffed bear.

Then, protesters took to the streets with a bullhorn, with one woman shouting to residents “What are you doing to protect your neighbors, people in their houses?,” while a man shouted “Get in the fucking streets!”

The woman then made a convincing argument that homeowners should open their doors to the protesters, shouting over the bullhorn: “We protect you every night by being out here. Please come and protect us. Make sure you are offering us refuge. We are tired and yet we are still out here. We are simply asking for one night, one hour.”

Protesters cheer as they burn American flags at the guillotine outside the police bureau #PortlandProtest #Portland pic.twitter.com/R9I6dobNiv

Protesters call on people to let them into their houses and give them refuge as the movement progresses #Portland #PortlandProtest pic.twitter.com/tZZDVGUfov

According to the Portland PD, the rioters moved on to the Penumbra Kelly Building, where they assaulted police with rocks, bottles, paintballs and lasers, according to the Daily Wire.

At 11:45p.m., officers began to push the crowd to the west. Rocks, bottles, and other hard objects were thrown at officers. One lieutenant was struck in back of head with a glass bottle. His helmet prevented him from being injured. A Portland Fire and Rescue Medic embedded with one of the squads was hit in the shin with a large rock. He suffered a minor laceration to the leg.

At 11:59p.m., due to the life safety danger, a riot was declared. More warnings were issued from the PPB sound truck. The sound truck was struck and damaged by rocks and eggs. The rear window of a vehicle used to transport a Rapid Response Team squad was shattered by a rock. Numerous officers reported seeing individuals bearing “press” insignia throwing rocks at them. …

Officers initiated another push, attempting to convince the group to leave. This time, they went south on Southeast 47th Avenue to Southeast Stark Street. Officers disengaged again. Protesters lit traffic barricades, mattresses, a door, and other debris on fire in the intersection.

Between 45 and 50 officers had to be pulled from precincts to assist in the protest response. For most of the duration of this event, there were between 120 and 140 calls holding in the City of Portland. Calls included shots fired, assaults, alarms, threats, and suspicious circumstances.