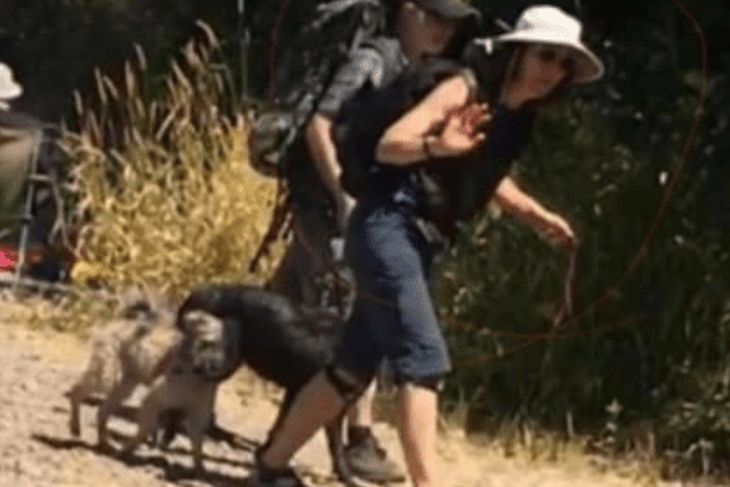 Oregon Governor Kate Brown (D-Portland) and her security detail appear to have violated Brown’s own mask mandate, according to a post that has gone viral on Facebook. In addition, a member of that security detail, an Oregon state trooper, has yet to be publicly recognized for rescuing a teenage girl from drowning. A witness to the incident last Sunday is now demanding that the trooper be awarded a medal from the Oregon State Police, but so far Brown has not publicly acknowledged the heroic act by the police officer.

In an interview with PJ Media, the witness, a woman named Rebekah (she asked us not to include her last name out of fear of retaliation from Gov. Brown) described the scene. Rebekah brought her kids to a riverside park on a hot summer day to go swimming. She happened upon Kate Brown and her Oregon State Police security detail on a trail next to the park in Marion County. None were wearing masks, despite a mid-July executive order requiring masks outdoors, not just inside public buildings.

We had just gotten there. We hadn’t even put our stuff down on the ground. As we walk down the trail a guy was screaming, “help help, do you have a rope?” My friend went to grab a stick and this girl was drowning. All I thought was, “Oh my God, I’m not going to let these kids watch somebody die today, right?” I gathered them up and I ran them up to the trail and I ran to go get help because the teenager that was drowning was three times my size. So I gathered up all the kids and we ran right up the trail. Well, the first people that we came across was a group of six people and I said, “Help, somebody’s drowning. Somebody’s drowning, run run!” And these two men jet past me and ran down to the water. Then this lady who I’m standing next to on the trail says, “Don’t worry, they are two state troopers.” And I said, “Oh, praise God. Thank the Lord!” And so I ran back down knowing that he knew what he was doing.

Rebekah said she had no idea at first that it was Kate Brown and her security detail she was seeing, but when she regained her composure, she realized who it was. “As soon as [the trooper] got her to shore,” Rebekah said, “he got out of the water soaking wet, and I ran right up to him and I said ‘God bless you. Thank you so much for your service.’”

“Then I said, since all the scrutiny that’s been going on today with the police and how people hate the police and they’re screaming ‘F— the police’ and ‘we don’t want you,’ I made sure to say that we back the blue and I threw my arms up and I cheered,” she added. “He put his head down after I said, ‘We back the blue,’ and I found that very odd. And then all of a sudden I look up and Kate Brown and I are locking eyes.”

At that point, Rebekah said she felt compelled to say something to the governor.

They were doing their own thing, and in my mind, I’m going, you go to every single Open Up Oregon rally, Let them Play rally, Back the Blue rally We’ve been protesting to let our kids play sports and go to school. With the chaos in the streets around Portland and Eugene, there’s no law and order. She gets police protection as we clearly saw but yet we are on her own while she’s trying to defund the police. So what was going through my mind was, when are you ever going to see Kate Brown and speak your mind? My two daughters were side by side with me at the Capitol, and my one daughter made a sign that said, “Kate Brown you can take away my school, you can take away my sports, but you will never take away my freedom.”

Rebekah told the governor, “See ya later, Kate!” as they were headed back up the trail.

As soon as Brown and her party saw the Trump hat Rebekah was wearing, they quickly put their heads down and refused further eye contact. She has attempted to contact the governor’s office and the Oregon State Police to recommend a public award for the officer who saved the drowning girl. Rebekah describes herself as a patriotic American who supports the military and the police, and says she only wants this positive story about police to receive the recognition it deserves.

“I want them to be honored,” Rebekah said. “Our governor, Kate Brown, witnessed a state trooper saving a teenager’s life right in front of her eyes. She should have been on the news on Sunday, honoring what a good job the cops do. They saved a human life, and we do need them. We do not need to defund them.”

PJ Media reached out to the governor’s office for comment on the incident, and received no response.

A couple of items jump out from this episode. Obviously, Kate Brown’s security detail, made up of Oregon State Police officers, represent the absolute best of the police and the heroic actions they take every day. This, despite Brown’s support of police defunding measures in the wake of BLM protests across the nation, and especially in Portland.