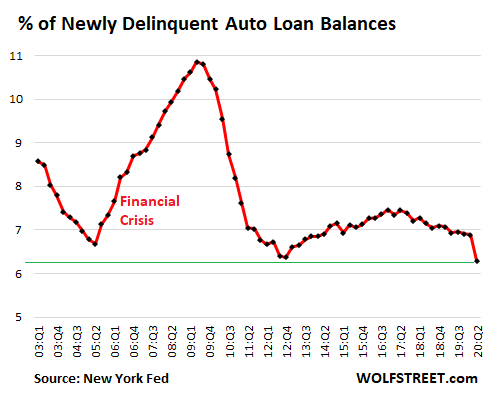 All kinds of weird records are being broken. But it’s scheduled to expire, and then what?

The New York Fed released a doozie of a household credit report. It summarized what individual lenders have been reporting about their own practices: If you can’t make the payments on your mortgage, auto loan, credit card debt, or student loan, just ask for a deferral or forbearance, and you won’t have to make the payments, and the loan won’t count as delinquent if it wasn’t delinquent before. And even if it was delinquent before, you can “cure” a delinquency by getting the loan deferred and modified. No payment, no problem.

Student loan borrowers were automatically rolled into forbearance under the CARES Act, and even though many students had stopped making payments, delinquency rates plunged because the Department of Education had decided to report as “current” all those loans that are in forbearance, even if they were delinquent. Yup, according to New York Fed data, the delinquency rate of student loan borrowers, though many had stopped making payments, plunged from 10.75% in Q1, to 6.97% in Q2, the lowest since 2007: 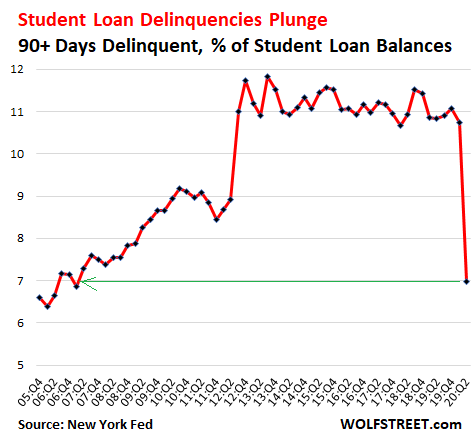 Student loan forbearance is available until September 30, and interest is waived until then, instead of being added to the loan. In a blog post, the New York Fed said that 88% of the student-loan borrowers, including private-loan borrowers and  Federal Family Education Loan borrowers, had a “scheduled payment of $0,” meaning that at least 88% of the student loans were in some form of forbearance. Until September 30. And then what?

And because delinquencies in student loans, auto loans, credit card debt, and mortgages are being “cured” by putting the loans in deferral programs and modifying the delinquent loans, they become “current” loans even though no catch-up payments have been made. 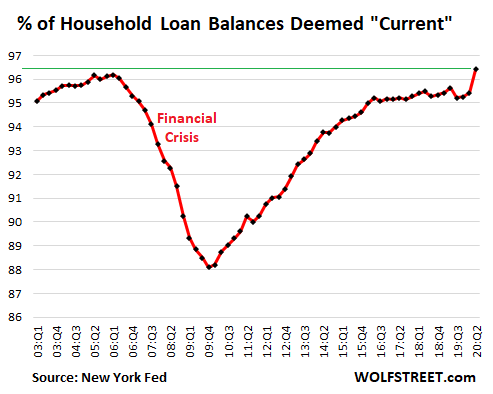 No payment, no problem for auto loans.

Yup, crazy world. Ally Financial reported in its 10-Q filing with the SEC for the second quarter that about 21% of its auto-loan customers were enrolled in its deferral program where they don’t have to make payments for 120 days. “The vast majority of our loan deferrals for customers in the program are scheduled to expire by the end of August 2020,” it said. And then what?

Lenders like these types of programs because they can kick the can of delinquencies down the road, and instead they have “performing loans” for which they can accrue interest which makes their investors happy, even though the customers don’t make any interest or principal payments.

Bank regulators normally get nervous about deferral programs. But it appears that bank regulators have been told the shelter at home until further notice.

Across all lenders, about 5.9% of the $1.34 trillion in auto loans – so close to $80 billion – are in forbearance, according to the New York Fed. And as a result, borrowers who cannot make the payment, don’t have to make it, and their loans are still deemed “current,” and the percentage of auto loans that are newly delinquent dropped to 6.29%, a record low in the data – while during the last crisis, the delinquent balances were above 10% for nearly two years:

Cars lose value as they age, and when the loan balance grows as the collateral value declines, lenders are exposing themselves to greater losses when they finally have to grapple with those delinquencies.

Mortgages turn into ATMs by not making payments. Delinquencies “cured” at record pace.

According to the New York Fed, $730 billion in mortgages are in forbearance, and the payments that are being deferred amount to about $6 billion a month – “a significant transfer to homeowners that may be used to increase consumption elsewhere or to pay down other types of debt.”

And mortgages that had been 30 to 60 days delinquent were “cured” at record pace. They were brought to “current” not because borrowers made catch-up payments, but because these mortgages were modified and rolled into forbearance, and thus were once again deemed current and thus “cured.” A record 61% of the 30-60-day late mortgages were thusly “cured” in Q2: