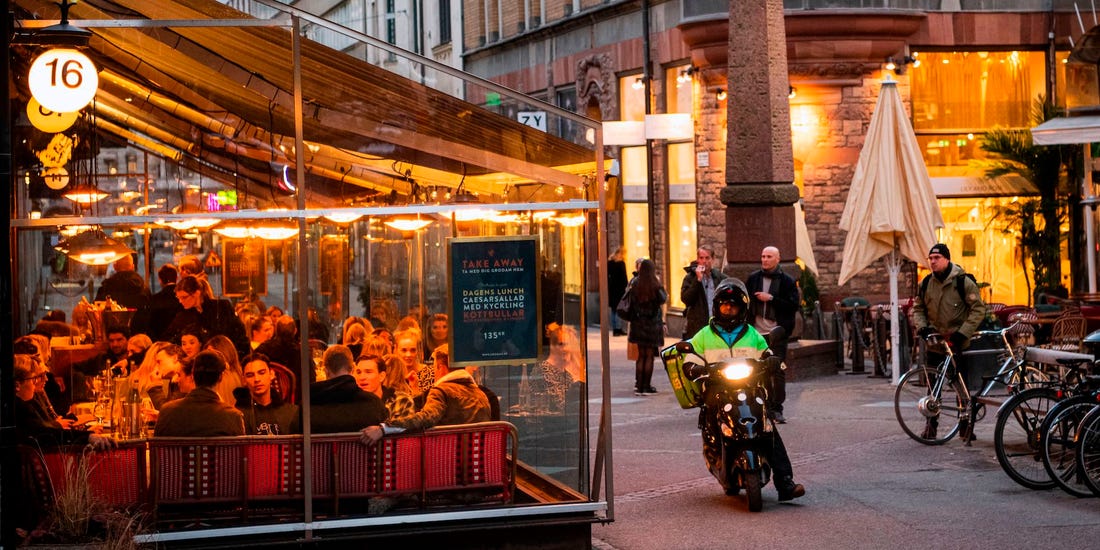 In life, we encounter things which may work in theory, but not in practice.  Communism is famously one of those things.  Time travel is another.  With any luck, Americans will soon come to realize that strict social distancing, economic lockdowns, and mask-wearing all belong in that category of supposedly sound ideas that simply don’t work in reality.

For evidence, let’s look to Sweden.  As Dr. Sebastian Rushworth, an ER doctor at a hospital in Stockholm, writes on his blog, “COVID is over in Sweden.  People have gone back to their normal lives and barely anyone is getting infected anymore.”

Basically, Sweden did the exact opposite of what most Americans tragically still believe are the necessary requirements to reach the outcome that Sweden has achieved.

He argues what should now be obvious to any rational, thinking person, which is that “the size of the response in most of the world (not including Sweden) has been totally disproportionate to the threat.”

Naysayers may point to Sweden’s mortality rate to discount its success.  But the virus has taken nearly 6,000 people in a country of 10 million, and one which tallies about 100,000 annual deaths each year.  Given that 70 percent of those who died with COVID were over the age of 80 and very unhealthy, he argues, “quite a few of those 6,000 would have died this year anyway,” making COVID a “mere blip in terms of its effect on mortality.”  And, while Sweden will likely continue to see deaths from COVID, it will likely never see anything close to those numbers again.  The large number of deaths can be clearly attributed to a “complete lack of any immunity” to this novel coronavirus.

A few months ago, Dr. Rushworth says that “practically everyone who was tested had COVID,” even if the presenting symptom was a “nose bleed” or “stomach pain.”  Today, he reports that he hasn’t seen a COVID patient in over a month, and even when he tests patients with fever or cough, the “tests invariably come back as negative.”

To be clear, Sweden’s economy is wide open.  No one is social distancing or wearing a ridiculous mask.  Life is back to normal, and the infection rate is still falling.  It’s pretty safe to say the population in Sweden has now built some level of immunity to the virus, and all signs indeed point to the pandemic being over in Sweden.

What is the obvious takeaway from this?  Perhaps Dr. Rushworth sums it up best, saying that he is “willing to bet that the countries that have shut down completely will see rates spike when they open up. If that is the case, then there won’t have been any point in shutting down in the first place.”

In other words, all of the lockdowns will have been meaningless.

But we were assured that the lockdowns, the distancing, the masks, all of it, would absolutely work, because science (Science!) suggested that these are the only things that could work.

But how strong was the scientific evidence to support our government making us lab rats in its experimental and unprecedentedly oppressive response to this virus?

To answer that, we’ll look to Alex Berenson, who, in my opinion, is nothing short of a national hero for his honest reporting throughout the pandemic. It often serves as a counterbalance to the panic porn preferred by the media, and I could not more highly recommend following his wonderful Twitter feed.  In Part 2 of his book series, Unreported Truths About COVID-19 and Lockdowns, he reminds his leaders that lockdowns, complete with the economic disruption and social distancing required, aren’t some tried and true means of slowing the spread of a virus in a pandemic.  “The idea of using lockdowns to slow epidemics took off in 2006,” Berenson writes.  In the aftermath of an avian flu scare in 2005, President Bush “asked for research on slowing epidemics.”

I wish what follows was a joke or some conspiracy theory, but it’s not.  The idea was the brainchild of the 14-year-old daughter of a computer scientist named Robert Glass.  She “created a model of the way social distancing might slow the spread of the flu,” and this was expanded upon by her father in a “simulation “proving” lockdowns could reduce an influenza epidemic in a hypothetical town of 10,000 people by 90 percent.”

In 2007, predicated upon the strength of the simulated results, the CDC issued new guidance to “reduce transmission, from “voluntary isolation of ill adults” to “reducing density in public transit.”

This was the moment, according to the New York Times, when Non-Pharmaceutical Interventions, or NPIs, became “official US policy,” thus presenting the 2020 lockdowns as just an example of long-standing procedures, and totally understandable policymaking.

Crucially, [the 2007 CDC paper] also contained a “Pandemic Severity Index” that included five categories.  On the low end, Category 1 represented a normal flu season, which might kill up to 90,000 Americans.  On the high end, a Category 5 pandemic, like the Spanish flu, would kill at least 1.8 million Americans.

Based on the CDC’s scall, Sars-Cov-2 almost certainly should be classified as a Category 2 epidemic, meaning it will cause between 90,000 and 450,000 deaths.  For an epidemic like that, the CDC merely said governments should consider school closures of less than four weeks, along with moderate efforts to reduce contacts among adults, such as telecommuting.

The prospect of closing all retail stores or offices is not even mentioned in the paper, not even for the most severe epidemics. (emphasis added)

In short, it was a high school sophomore who initially dreamt up the modern notion of lockdowns and social distancing.  Her computer scientist father then created a compelling simulation involving 10,000 hypothetical people enduring a pandemic, and the CDC applied the hypothesis by creating some new interventions, though even those interventions certainly did not include recommendations for an economic lockdown, stay-at-home orders, or mask mandates.

In other words, the effectiveness of economic and social lockdowns, stay-at-home orders, or mask mandates had all only worked in theory before 2020, but had never been shown to be effective in practice.

But based on the foundation of that little girl and her father’s hypothetical experiment and the theory that followed, more than 300 million real Americans in 2020 have endured the economic hardship, social unrest, loneliness, depression, anxiety, and increased substance abuse, suicide, and crime that the lockdowns have produced in reality.

And in terms of the national morale, it couldn’t be more obvious that the social fabric is being torn apart.

The very-likely useless rags that people are wearing over their faces serve as a constant reminder to Americans that their neighbors are little more than vectors for disease transmission.

Teachers in America, who often have endured no pay interruption, incredible job security, and inflation-proof pensions, are now telling their communities that they shouldn’t be expected to return to their workplace, even as many members of their own communities are praying that they can return to work soon and pay their bills.