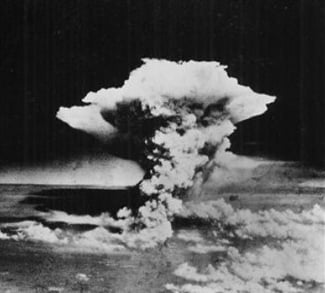 The crux of the matter is whether total war in its present form is justifiable, even when it serves a just purpose. Does it not have material and spiritual evil as its consequences which far exceed whatever good might result? When will our moralists give us an answer to this question?”

The two state of the art weapons released over the cities of Hiroshima and Nagasaki constituted the most devastating blasts of all time.

According to the best estimates of anti-nuclear weapons scientists, anywhere from 110,000 to 210,000 people died in the twin holocausts. Two thirds of the city of Hiroshima were wiped out in a single attack, the equivalent of 15,000 tons of TNT. [2]

These massive mushroom clouds would go on to become a symbol of the fate of humanity encapsulated in the threat of atomic horror. For all my life, I have contemplated the prospects of nuclear incineration and the aftermath that would follow if our leaders get caught up in a tragic misstep.

What has been the careful course of a wizened populace after 75 years of careful planning?

On January 23 of this year, the doomsday clock, created by the Bulletin of Atomic Scientist, announced the clock had revved up to 100 seconds before midnight. That is an all time record in the history of the time piece! Do the memories of the devastating attacks of Aug 6 and Aug 9, 1945 have some process of ever re-igniting the imaginations of a new generation of civilians and reversing the tide of Nuclear Armageddon? This is a subject we will explore on this special anniversary episode of the Global Research News Hour.

Our first guest is renowned academic and writer Professor Michel Chossudovsky. In the first half hour, he brings us up to date on how the U.S. has re-ignited interest in once again turning bombs like the ones dropped over Hiroshima and Nagasaki into “ready for use” weapons in the arsenal of conventional warfare.

Our second guest, Greg Mitchell, comes along in our second half hour. He elaborates on how early information about the nuclear warfare in Japan was concealed, and how a new blockbuster release from Hollywood served to falsify the news from the battlefields.