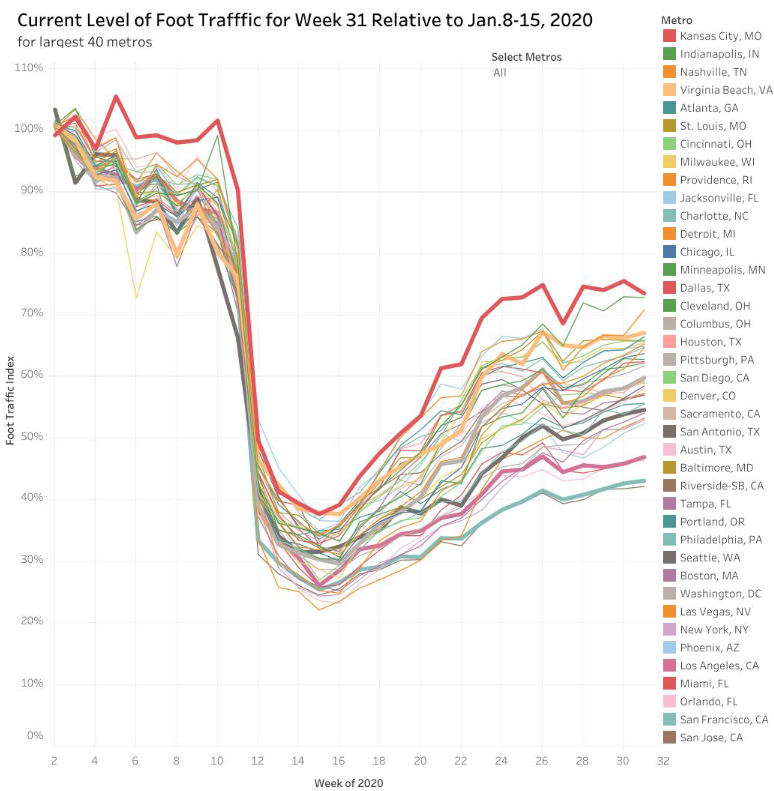 The longer the Pandemic drags on, and work-from-home gets entrenched, the further Old Normal moves out of reach.

There has been a recovery of sorts, but it has been frustratingly partial and in some areas, such as office occupancy, even minimal, with many peculiar shifts, twists, and turns – each with losers and winners: That’s what real-time data trackers are pointing out.

The AEI released its latest weekly Foot Traffic Index for 40 metro areas in the US today, based  on cellphone GPS data from Safegraph.com. The index was put together to track the recovery from the Pandemic. The seven-day moving average tracks daily visits to “points of interest,” such as stores, malls, restaurants, hotels, movie theaters, airports, hospitals, other places of commerce, and other points of interest, and visits from employees.

In the chart below, each line represents one of the 40 metros. It compares foot traffic in the current week to where foot traffic was in the week ended January 15. A value of 100% would mean foot traffic is back at its January-old-normal level.

Note the curve of Kansas City. It was near-V-shaped, up from the trough of 38%. But then the city began to experience a major outbreak of Covid-19. The city and the people are now trying to stay safe and contain the outbreak (click on the chart to enlarge it):

Foot traffic into the security zones of airports – the TSA’s daily checkpoint screenings, a real-time indication of how many people are flying – shows similar stall in the recovery, but a much lower levels, still down about 70% from a year ago.

I can sort-of confirm the San Francisco foot-traffic score of 43%.

Nearly all of the tourists from overseas are gone, based on my observations from the touristy part of the city where we live. For office workers, working from home is huge here. Companies in the Bay Area have pushed out the date when people should return to the office. Google moved its return-to-the-office-date to at least July 2021. Other companies are now implementing work-from-home as a permanent feature or option, such as Twitter. With many startups, there are doubts if there will be even a company to return to.

Restaurants can be open, but only for outdoor dining, take-out, or delivery. You get used to eating in 59° windy and foggy weather (this is summer, after all). But lack of sidewalk space makes this impossible for many restaurants. In other places, street-parking in front of the restaurant has been converted into a seating area. Many restaurants have switched to take-out only. A large number of restaurants are closed and may never reopen.