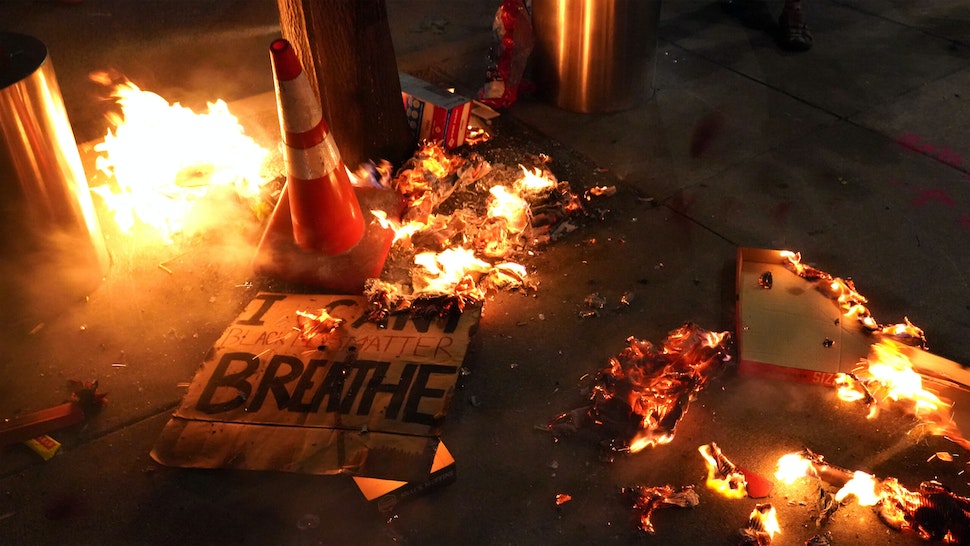 Far-left rioters attacked law enforcement officials in Portland on Saturday night and set an arson fire inside of a police building that they breached.

The group of rioters, estimated by police to have numbered in the hundreds, marched to toward the Portland Police Association (PPA) Office and “illegally block[ed]” traffic along the way.

“People within the crowd committed crimes when they erected a fence, pushed dumpsters into the street to block traffic, set a dumpster on fire, vandalized the PPA office with spray paint, and destroyed security cameras,” the Portland Police Department said in a statement. “At 11:35 p.m., people within the crowd broke the window to the PPA Office, unlawfully entered, and started a fire, committing the crimes of criminal mischief, burglary, and attempted arson.”

Law enforcement officials said that due to the criminal activity of the far-left rioters, they declared a riot and ordered them to disperse immediately.

“Officers from the Oregon State Police and PPB arrived in the area to disperse the crowd. They were met with a hostile crowd who began throwing glass bottles and paint balloons at them,” the statement continued. “The hostile crowd also tried to injure officers by shining green lasers into their eyes, which is a crime in Oregon. Three officers suffered injuries. Two were transported to an area hospital by police vehicle and later released. Personnel from Portland Fire and Rescue were able to gain access to the location and extinguish the fire inside the PPA Office.”

“While officers were moving rioters they came upon areas of the street where rioters built barricades with street closure signs, picnic tables, and other types of material,” the statement added. “Rioters on the other side of the barricade were hurling objects at officers. At that point, officers were able to get around the barricade and continue to push the rioters away from the closure area. About 300 rioters gathered at Kenton Park.”

Journalist Andy Ngo, who recently testified before the U.S. Senate on Antifa, tweeted out videos of the attacks.

“Portland Police declared a riot. Antifa broke inside the union hall and set the inside on fire,” Ngo wrote. “This is the third time they’ve broken into the police union and the second time they set fire inside.”

Breaking: Portland Police declared a riot. #Antifa broke inside the union hall and set the inside on fire. This is the third time they’ve broken into the police union and the second time they set fire inside. #PortlandRiots pic.twitter.com/wC2gKhzLcL

“Overnight on 8–9 Aug, hundreds of Antifa descended on the @PortlandPolice union building again in north Portland,” Ngo added. “They blocked the road, started street fires & tried to burn down the union hall again. Video from inside shows the arson attack.”