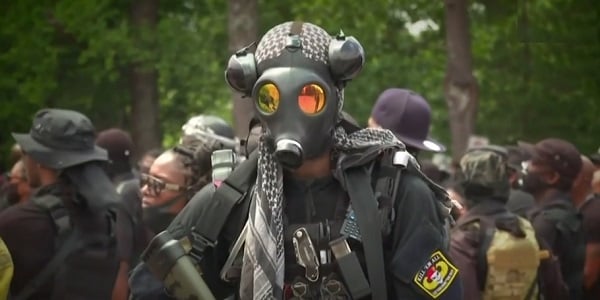 ‘We aren’t here to talk’

The July 4 event in Stone Mountain lit up social media sites with chatter about the group’s goals and military capability.

Georgia’s law enforcement community has for the most part dismissed the militia group’s demonstration as inconsequential bluster.

According to the nonprofit group Georgia Law Enforcement, which posted a description of the event on Facebook, an armed group of up to 300 “protesters” marched through the streets of Stone Mountain carrying weapons and yelling racially charged slogans.

They proceeded to enter Stone Mountain Park, home of the nation’s largest Civil War monument featuring the images of Confederate leaders Jefferson Davis, Robert E. Lee and Stonewall Jackson carved into the side of a granite mountain. According to a July 8 Fox News article, the city of Stone Mountain is receiving increased calls to remove the monument, but that would take an act of the Georgia legislature.

According to the July 5 post from GeorgiaLeo.org describing the demonstration by the black militia:

“’Protestors’ from the self-proclaimed ‘NFAC – Not F*cking Around Coalition’ marched through the streets of Stone Mountain Georgia yesterday chanting anti-white, anti-BLM, and anti-Police sentiments. Along the way their leader stopped and berated white drivers asking them for reparations and telling them to ‘go on with your white denial before you lose your life’ when they laughed in his face.

“We had these videos sent to us by dozens of followers, and we scoured over them trying to find out what the actual goal or message of the ‘protest’ was, but it seems like it was only intended to spread the above hate messages.”

The racial rhetoric did not stop there. The militia leader also threw out taunts to rival white militia groups, naming the Three Percenters and the Boogaloo Boys:

“I don’t see no white militia, the Boogie[sic] Boys, the Three Percenters and all the rest of these scared-ass rednecks. We here, where the **** you at? We’re in your house… let’s go!”

Watch the militia march through town below:

They headed to Chicago? https://t.co/NINcsQVUuE