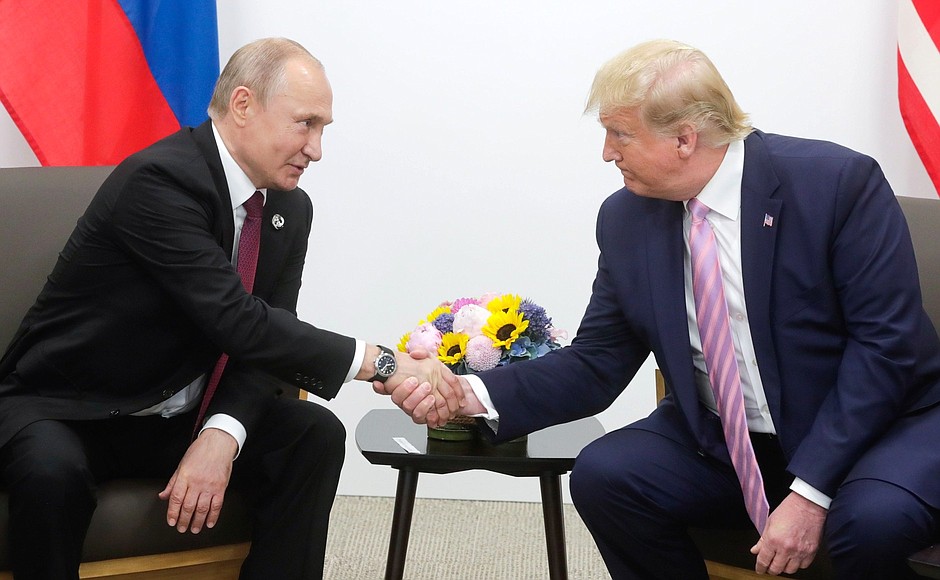 Just over a year ago (June 28, 2019), Russian President Putin and President Trump met face to face on the sidelines of the G20 summit in Osaka, Japan. This dialog and negotiation is exactly what the War Hawks seek to prevent and destroy. Photo: en.kremlin.ru

In a desperate effort to break Republican support for President Trump, and to blunt the efforts of Russian President Putin to organize a summit of leading nations to address the global coronavirus pandemic and the worldwide economic collapse underway, forces committed to maintaining the present dangerously dysfunctional world order have launched their most unhinged attack yet.  Using the New York Times (NYT) and the Guardian to lead the assault, anonymous “intelligence sources” claim that the Russians are paying a bounty to Taliban militants to kill American and allied soldiers in Afghanistan.  They further claim that Trump has done nothing about this, either because he had not been briefed, or worse, out of “deference” to Putin, thus bringing the matter back to the original theme of Russiagate, that Putin “has something” on President Trump which he is using to control him!

As with the lies fabricated in the Russiagate story, the NYT and other media treat the allegations coming from the intelligence community as if they are proven facts.  In their July 1 follow-up to the original story, the authors begin, “Russia’s complicity in the bounty plot came into sharper focus Tuesday”, which is an assertion that the wild claims made in their first articles are now accepted as true.  The same approach has been taken by Democrats, such as House Speaker Pelosi who, after admitting she had not yet been briefed, nevertheless declared Trump’s failure to condemn Russia as “outrageous”, accusing him of wanting “to ignore” any charges against Russia.  She then repeated her line from Russiagate, “With Trump, all roads lead to Putin.”

Not to be outdone, likely Democratic presidential nominee Joe Biden declared of Trump, “His entire presidency has been a gift to Putin.”  Biden charged Trump with engaging in “a betrayal of the most sacred duty we bear as a nation, to protect…our troops when we send them into harm’s way.”  Perhaps Biden does not remember that the reason there are still U.S. troops in Afghanistan, in “harm’s way”, is because he and Obama kept them there, with neither a strategy for victory nor withdrawal, and with no compelling national security interest at stake!

Backing up Biden was Representative Seth Moulton, who accused Trump of “treason”, adding that he is responsible for the deaths of any service members in Afghanistan.  None of his Democratic attackers acknowledged that Trump has been winding down the failed Afghan war, a policy which most of them oppose.  Neither do they mention that the conduct of the war has been exposed by internal Defense Department documents as a failure due to fraudulent assessments and incompetent strategy, while being supported by lies about the “success” of the mission.

While the Democratic response is predictable, what is different in this latest effort to smear Trump and Putin is that the allegations are designed to provoke Republicans to distance themselves from Trump.  Senator Sasse of Nebraska, who has never been a strong supporter of Trump, blasted Trump for inaction, saying that what he wants to hear from the administration is “their plan for Taliban and GRU agents in body bags,” an open call for the murder of Russians, which would be an act of war.  Rep. Liz Cheney, the daughter of former Vice President Dick Cheney and a hardcore neocon war hawk herself, demanded to know what has been done “to protect our forces and hold Putin accountable.”

Equally provocative was an ad produced by anti-Trump Republicans, the “Lincoln Project”, run by former aides and allies of war hawk Senator John McCain and the Bush machine, which was aired in “battleground” states within hours after the story broke in the Times.  “Now we know Vladimir Putin pays a bounty for the murder of American soldiers,” the ad’s narrator solemnly intones.  “Donald Trump knows too, and does nothing.”  At the same time, another anti-Trump PAC has emerged, “43 Alumni for Biden”, referring to officials who had served in the George W. Bush White House and in his campaign (Bush was the 43rd president).  They claim to have recruited 200 Republicans to join their PAC to defeat Trump.

And as the NYT story was breaking, several polls were released which show a widening lead for Biden over Trump, with some giving Biden a lead of more than ten points.  In response, Fox News reporter Trace Gallagher suggested that Trump “might drop out…if his poll numbers don’t improve.”

White House officials were quick to point out that the allegations in the NYT articles are “unverified”, which explains why the President was not briefed on them.  Defense Department officials and military leaders from the Pentagon confirmed this assessment, and the National Security Agency disavowed the story of the Russian bounties.  As for Trump, he tweeted out a response, describing it as “made up by Fake News….The secret source probably does not even exist….Just another hoax.”

A crucial element in the story is the role of British intelligence, which is not surprising, as much of the narrative of the original Russiagate fabrication originated in Her Majesty’s intelligence networks.  The story in the Guardian even reported that British intelligence officials were briefed on the story before the Americans were!  The story in the Guardian claims that unit 29155 of the intelligence branch of the Russian military, the GRU, is responsible for the payment plan.  This is the same unit allegedly involved in the poisoning of Russian defector Sergei Skripal and his daughter, a highly dubious accusation in March 2018 used to justify new, punitive sanctions against Russia.  Among those cited confirming the bounty plot in the Guardian are a Russian MI6 asset, and Sir Andrew Wood, former British ambassador to Russia, who delivered the Christopher Steele dossier against Trump to anti-Trump Senator John McCain in December 2016.  Steele, an “ex”-MI6 operative whose dossier was paid for by the Clinton campaign and included salacious, slanderous attacks on Trump which were used by the FBI to obtain warrants from the secret FISA Court to spy on the Trump campaign, continues to be active, despite the near-universal recognition that his charges were not only unverifiable, but part of an elaborate disinformation campaign designed to defeat Trump’s candidacy, or provide the grounds for his removal after his election.  Steele recently spoke before the British parliament, and still maintains that “Putin owns Trump.”  It is noteworthy that Skripal’s defection had been run by Steele’s Russian division of MI6, and there are reports that he may have been a source of some of the lies in Steele’s dossier.

The release of the bounty plot story coincides with a broader attack on Trump, coming from military and intelligence circles, including many who served under Trump.  It is this coordinated effort which is aimed at breaking Republican supporters away from Trump, in a way which was not possible previously, by claiming his opposition to the “endless wars” launched by his predecessors, Bush and Obama, is a sign of weakness in the face of an aggressive assertion of Russian imperial interests.  As Trump’s repeated denunciation of these wars has been central to his popular support, these networks had remained mostly silent, except when Republicans in the Congress joined with Democrats to denounce his withdrawal of troops from Syria, and his outreach to the Taliban, to end the war in Afghanistan.