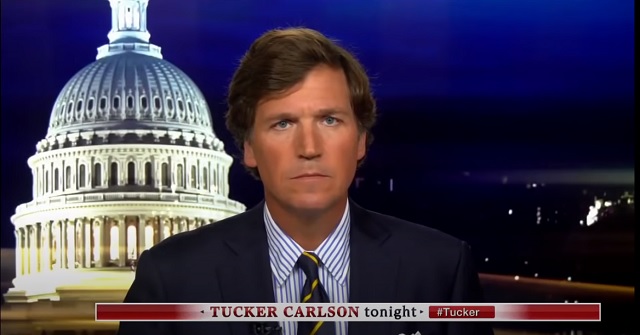 Tucker Carlson “set cable news ratings records in back-to-back quarters this year,” according to a report from TV Newser.

As I’ve said before, Tucker appears to be positioning for a presidential run in 2024. He lost a bunch of weight and is laying out a decidedly centrist platform to try and unite the country.

Tucker laid out these three planks for a political platform of the future on his show Tuesday night:

First is vigorous defense of total equality under the law. We are equal because we are citizens. Every American has precisely the same rights as every other American. Period. That’s the promise of America. It’s why people move here. For a long time, that was obvious. It no longer is. Republicans must work as hard as they can to make America fair again. Wealth, appearance and ancestry can play no role whatsoever in the eyes of the law. That means criminals like Jeffrey Epstein must go to jail the first time they’re caught molesting children. It means your children must have precisely the same chances of getting into college or getting a job as anyone else’s children. It means fighting to make this country a colorblind meritocracy. The alternative to that is disaster. Slavery and Jim Crow were immoral because they punished people for how they were born. Any system that punishes people for how they were born is immoral, always. Republicans must say so.

Second, they must defend our freedom of speech. We are not a free society without it. If you can’t articulate something, you can’t think it. That’s why authoritarians try to control language: they’re trying to control your mind. Republicans should lead the fight against this. Americans have the absolute right to tell the truth. This isn’t negotiable, nor is it a theoretical concern. If you can’t think freely, you can’t solve problems. Try to build a hydro plant, or fly a commercial airplane if certain categories of thought are off limits. It doesn’t work. The power grid collapses; planes crash. Society degrades. No speech means so science, no art, no civilization. Most of us were taught that this debate was settled conclusively during the Enlightenment, when reason vanquished dogma. But it wasn’t. The forces of superstition and brainwashing remain stronger than ever. The Republican Party must fight them, or the party is not worth having.

And finally, the GOP exists to the serve the interests of normal people. Middle class families are the core of this country. They are our only hope for the future. Yet both parties have abandoned them. Middle class families have no national spokesman. They have no lobby in Washington. Republicans pretend to be their champion. They’re not. Instead of improving their lives, the party feeds its voters a steady diet of mindless symbolic victories — partisan junk food designed fill them feel full, even as they waste away. Who cares how many Benghazi hearings we have? How did Peter Strozk’s text messages become more important than saving American jobs from foreign nationals? It’s lunacy. We fall for it. Meanwhile, life for the dwindling American middle class gets steadily worse. Junkies have moved into your park. Your nephew died of a fentanyl OD. Saddest of all, you’ve realized your kids will never be as successful as you are. The American dream has died with your generation. As all this happened, Democrats laughed. Republicans just ignored it. That can’t continue. The only political movements that endure are the ones that make their voters stronger.

It’s a solid platform for now but I doubt it’s going to be enough. You need something people are willing to die for. That said, I’m sure his platform will continue to evolve as the political climate post-Color Revolution becomes worse and worse.

Tucker hasn’t been afraid to criticize Trump and he has been absolutely destroying the sold-out shills and cowards running the GOP.