Among leading American political commentators, Victor Davis Hanson, from the beginning, has been President Trump’s most steadfast, consistent, articulate and clear-eyed supporter.  He has unswervingly praised not only the President’s amazing list of accomplishments, but the character and emotional resilience of the man that enabled him to achieve what he has, despite an unceasing barrage of meretricious denunciation and potentially mortal attacks that would have defeated and broken lesser persons.  There is absolutely no doubt about Hanson’s intense desire to see the President succeed — based on a profound knowledge of history he knows the stakes.

But in a recent column VDH has had to call out the President’s seeming reluctance to trumpet a stentorian defense of either the good name, history and heroes of the nation, or to do anything in defense of civilized life, both of which for weeks have been under ceaseless and largely unanswered and unresisted revolutionary assault.

VDH is right, and the point he makes, echoed here, is born of a passionate desire to see the President reelected.

President Trump can no longer wait, trim or equivocate.  He needs to passionately and unapologetically denounce and reject the ongoing revolutionary condemnation of America, its history, principles and heroes, and all the accompanying violence, in powerful argument and stirring rhetoric.  And he needs to take forceful action against it.  Now.

The electorate needs to know, now and unequivocally, that President Trump believes deeply in the goodness of the nation he leads, and that he rejects completely the race-guilt Nazi smear of the Democrat party, that America’s whites are racist and evil, not because of their conduct, but because of the accident of their skin color.

The President faces a growing risk of losing in November if he waits.  He cannot stand idly by as summer passes into fall and the unanswered libels and unresisted destruction mount, hoping that suddenly, in November, a terrorized majority will turn to the man who neither countered the lies and eloquently defended the nation’s goodness, nor took any effective steps to halt the plunge into chaos and lawlessness.

Trump is dropping in the polls not because the public has any sympathy either with what’s happening on the streets or with the calumnies — the great majority are terrified by the first and appalled by the second — but because the one man who should be speaking and acting against both, and defending America’s people, nation and founders against the slanders, appears missing in action.

Apparently, the President is listening to those who counsel appeasement of the mob, who whisper that America’s patriots have nowhere else to go.  Have not enough failed Republican presidential candidates (G.  H.  W.  Bush, McCain, Romney) made this fatal assumption to their and our sorrow? Jared Kushner and his philosophical ilk should be banished from Trump’s presence, save family gatherings, until after the election.

No part of the mob or those who sympathize with it will ever vote for Trump.  The part of the black vote the President has a chance of getting is that segment that already realizes how desperately every black community needs the active presence of the police.

Trump’s voters (and a very large number of those who did not vote for him) are shocked, confused and frightened at the precipitous descent of the country into unanswered self-condemnation, violence and threatened revolution.  No one is forcefully responding to the transparent calumnies of America’s latter-day Bolsheviks, let alone acting to protect ordinary citizens from their enormities.  And among this confused and frightened majority, who hear no clear champion, there is a creeping sense that the cause may be lost, that America today has no defenders, so why bother voting for Trump.

The idiocy of the left’s libels is so apparent that the speeches very nearly write themselves:

No nation in human history, enshrining freedom and the rule of law, has elevated so overwhelming a portion of its people, of all races, out of material misery and into an abundant life; no racial majority has done more over generations to raise up a disadvantaged racial minority — from the all-white US Supreme Court’s unanimous decision banning segregated schools, to the overwhelmingly white US Congress’s Civil Rights Act of 1964 and voting Rights Act of 1965, to the same white elite’s embrace of affirmative action in hiring and college admissions, to preferential advancement in police and fire departments, to subsidized housing and direct welfare payments.  And the nation is willing to continue such of these efforts, and more, that hold out promise of progress.  But it will not be blackmailed by threats of violence and mayhem, and it will never confess to the lie that its nation is evil or its white citizens and police are racist because of the actions of those who have been dead for more than a hundred years.

And as to the mobs that rage in cities across America, the President has no easier rhetorical target:

To those that say progress will come through violence, looting, burning police stations and intimidating citizens in their homes, he can say, with complete moral assurance, that nothing is happening in America today, no condition exists, that remotely justifies the resort to such barbaric behavior; and he can further suggest that the perpetrators, enablers, and cheerleaders of such conduct look to the bloodstained revolutions of Europe over the last 200 years, and ask themselves if those methods are preferable to moving forward through reasoned debate, in the sacred constitutional Institutions bequeathed us by our great founders — debate that has indisputably produced such enormous progress during the last half century for America’s blacks and numerous other segments of our population who shared less than fully in America’s promise.

But the President will be making a grave error if he waits till the fall to mount a full-throated defense of the nation and of the nation’s whites’ good name, and condemnation of mob violence and defense of the rule of law.  If he chooses, Romney-like, to wait, apathy and defeatism will have accumulated among his voters and those who might have been his voters.  Drifting without leadership or a champion, undefended for months, many of them may be contemplating the peace that can be purchased with surrender. 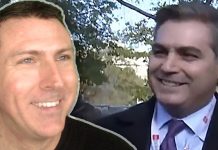 The Genius of Jim Acosta 😂