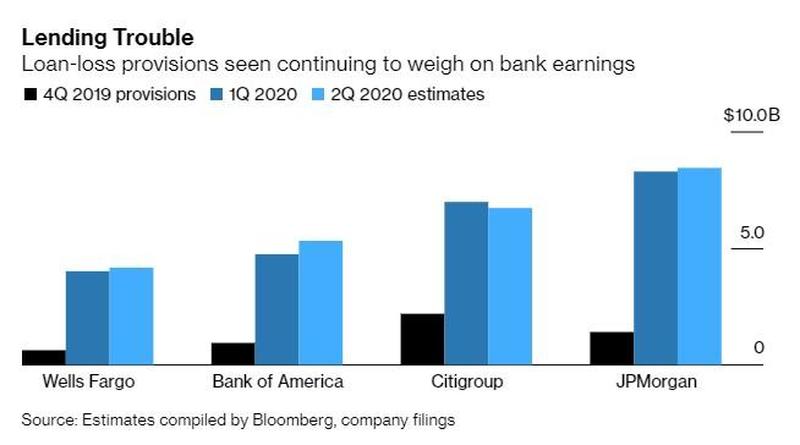 U.S. banks could be setting up for their worst quarter in more than a decade as loan loss provisions and the pandemic are set to wreak havoc on bottom lines.

Next week, many of the “too big to fail” banks are set to report earnings and are likely going to show that a drop in consumer spending and higher loan losses were not offset by better trading gains. Loan-loss provisions should reach their highest levels since the financial crisis, Barclay’s predicts.

Kyle Sanders, an analyst at Edward Jones, told Bloomberg: “We’ve got a full three months of the pandemic coming through the numbers now. The first quarter was rough, but it really only reflected a couple of weeks in March.” 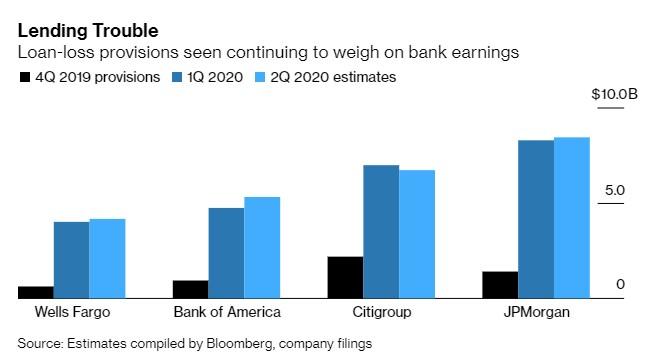 Loan losses are expected to rise as spiking unemployment has left many unable to service, or pay back, their loans. New loans have also dried up as banks tighten their belts. Service charges and credit card fees are also likely going to fall, as large portions of the American economy were shut down for months, suffocating economic activity.

And while many banking stocks have recovered somewhat, the S&P 500 Financials index is still down 26% since last December. Wells Fargo alone is down 55% this year and is expected to announce a dividend cut. Bloomberg has predicted that despite increasing provisions in the first quarter of the year, banks are still going to have their worst quarter in a decade when they report this upcoming week.

Wells Fargo Chief Financial Officer John Shrewsberry commented last month that the bank would likely set aside more for bad loans in Q2 than the $4 billion it set aside in Q1.

Banks will be looking to trading and underwriting to help try and salvage the quarter. Stock and bond trading was likely up about 31% in Q2 according to estimates. JP Morgan is expected to post the largest increase of about 50%. Citigroup Inc.’s Richard Zogheb, global head of the debt capital-markets division, said he thinks there will be record volumes in trading for the quarter. This stands at odds with previous cyclical downturns, where investment banking and trading revenue would fall as much as 30%.