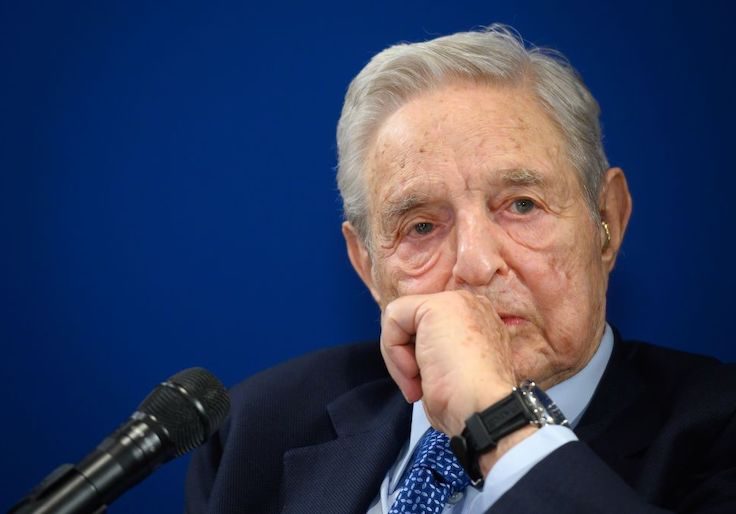 Liberal billionaire George Soros is on pace to double his 2016 election spending as he works to oust President Donald Trump, public records show.

Soros’s big investments in the 2020 race have gone into the coffers of the Democracy PAC, a super PAC that passes money to other liberal PACs working to defeat Trump and congressional Republicans. The super PAC has received $40 million—double the $20 million Soros spent on Democratic efforts during the 2016 election cycle—from both Soros and a nonprofit in his sprawling network.

The megadonor’s torrent of spending highlights the extent to which liberal donors are committed to getting Trump out of office. Many groups financially backed by Soros have launched multimillion-dollar attack ad campaigns in swing states to reach moderate voters who backed Trump in 2016. A network of liberal donors, including Soros, has pledged hundreds of millions on 2020 election efforts.

Republicans have noted that many Democratic candidates who lambast big money in politics benefit from the billionaire’s cash. “While Democrats across the country sanctimoniously rail against the influence of dark money in politics, their party’s largest donors are bankrolling a massive web of liberal organizations to get them elected,” one operative said. “George Soros’s unprecedented spending further highlights just how dependent Democrats are on contributions from billionaires, despite their hypocritical rhetoric.”

Soros has directly provided $5.5 million to his super PAC. Another $35 million came from his Fund for Policy Reform, a nonprofit in his Open Society Foundations network that reported having $750 million in the bank on its most recent tax forms. This arrangement allows Soros to keep his name from the top of lists highlighting the biggest donors to political committees while he gives tens of millions indirectly. Factoring in the money from the nonprofit, Soros’s election spending eclipses that of any right-leaning donor this cycle. It also puts him on par with fellow liberal billionaire Tom Steyer, who has pumped $40 million into 2020 elections and is ranked as the largest donor this cycle.

Democracy PAC has so far pushed $25 million to other liberal PACs. Its biggest expenditures include a $7 million donation to the Senate Majority PAC, a committee tied to Senate Minority Leader Chuck Schumer (D., N.Y.); $5 million to Priorities USA Action, the largest outside pro-Biden PAC; and $2.5 million to the left-wing Win Justice coalition. Democracy PAC has also spent big on state campaigns and passed money to another Soros PAC focused on electing far-left prosecutors.

Many of the groups that receive money from Soros are top spenders backing massive anti-Trump campaigns. Priorities USA is the biggest outside spender this cycle, according to the Center for Responsive Politics, having spent more than $28 million. Its efforts include anti-Trump advertisements focused on criticizing the president’s response to the coronavirus pandemic in the swing states of Pennsylvania, Michigan, and Wisconsin.

Soros also sent $2 million to committees directly, without passing the contributions through his PAC. These donations include $500,000 to the Democratic Grassroots Victory Fund—a joint fundraising committee between the DNC, all 50 state Democratic parties, and the District of Columbia Democratic committee. He sent hundreds of thousands more to House Speaker Nancy Pelosi’s (D., Calif.) victory fund, the Democratic Senatorial Campaign Committee, and other Democratic committees.