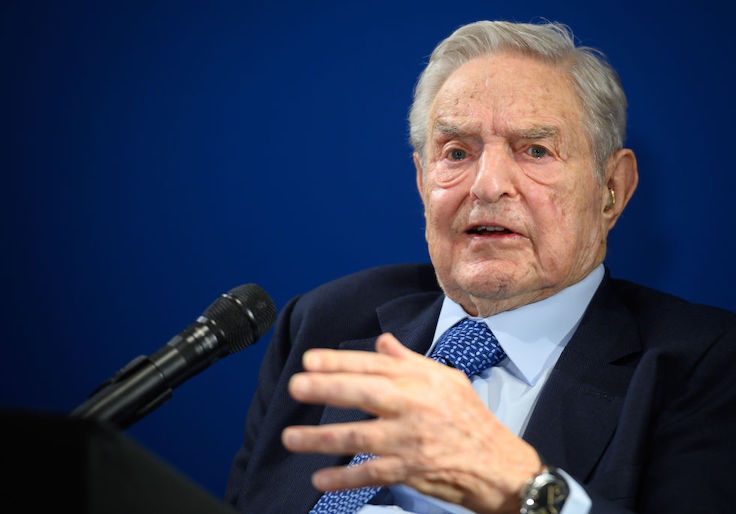 At least 18 left-wing groups supported by the billionaire George Soros’s liberal donor club applied for federal loans meant to help small businesses during the coronavirus pandemic, receiving up to $20 million in taxpayer cash between them.

Groups backed by the Democracy Alliance, a donor network cofounded by Soros, hauled in cash from the Paycheck Protection Program, a federal program established to provide an economic boost to small businesses and their workers during coronavirus shutdowns. Together, the groups received between $8.5 million and $20.7 million. In addition to the Democracy Alliance groups, another liberal donor network that pays the club for project services pulled in large sums from the small business relief program.

The cash influx comes as the Democracy Alliance ramps up its spending ahead of the November election. Its deep-pocketed partners mapped out a $275 million spending plan for the 2020 elections, calling into question whether groups aided by a network of millionaire and billionaire donors were in need of millions in taxpayer funds.

“The political groups that form the infrastructure of the far left rely on contributions from the country’s richest millionaires and billionaires,” one GOP operative said. “Now, those same groups are leaning on PPP loans while slamming the program as a handout to the rich. This shameless hypocrisy exemplifies how hollow and disingenuous their rhetoric is.”

The most prominent Democracy Alliance-backed group to receive a government loan was Media Matters for America, a liberal watchdog that is part of a network created by longtime Hillary Clinton ally David Brock. The group applied for and was awarded between $1 and $2 million in PPP loans. Media Matters reported receiving nearly $15 million in contributions on its most recent tax forms.

Citizens for Responsibility and Ethics in Washington (CREW), a left-leaning government watchdog group that has filed dozens of lawsuits against the Trump administration, also took in between $350,000 and $1 million in federal aid. CREW does not reveal its funders but has in recent years received millions from two Soros nonprofits, the Foundation to Promote Open Society and the Open Society Policy Center.

Many of the Soros-backed groups that took PPP loans have spearheaded massive anti-Trump campaigns. The Center for Popular Democracy, which leads an $80 million anti-Trump network with dozens of partners nationwide, received between $1 and $2 million in loans. Demos, a New York-based think tank previously chaired by Sen. Elizabeth Warren’s (D., Mass.) daughter, Amelia Warren Tyagi, was the recipient of between $350,000 and $1 million in loans. The National Immigration Law Center, which fights the president’s “anti-immigrant agenda,” was given anywhere between $1 and $2 million in loans.

One group that received government funds is located in the same building as the donor club’s K Street headquarters. CLASP, a nonprofit that recently entered into a partnership with the National Immigration Law Center, received between $350,000 to $1 million in PPP loans.

Another liberal network that donors use to obscure their donations also raked in substantial PPP loans: NEO Philanthropy received between $2 and $5 million from the program. NEO took in nearly $83 million in contributions and passed $40 million in grants to liberal groups in 2018. It also paid $398,000 directly to the Democracy Alliance that year, its tax forms show. A number of groups that received cash passed through NEO’s network are supported by Democracy Alliance members, including the National Immigration Law Center, Center for Popular Democracy, and ACLU.