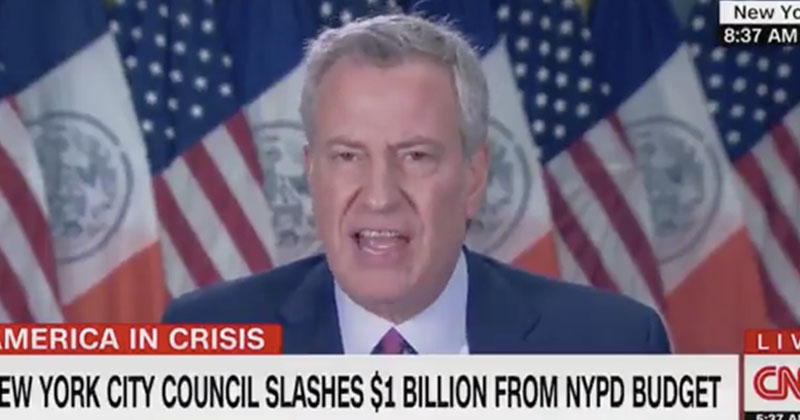 De Blasio joined CNN last Wednesday to defend his arbitrary decision to shut down churches but allow BLM “protests” to sweep the city, which was recently ruled unconstitutional by an Albany court.

When asked about the court’s ruling, de Blasio dismissed it as “just wrong,” calling the BLM protests a “different reality.”

“We worked with the religious leadership of this city for months, Cardinal Dolan and the Catholic church and so many other religious leaders who are in full agreement that it was not time to bring back religious services because of the danger it would cause to their congregants,” de Blasio said.

.@NYCMayor De Blasio defends banning religious gatherings but not #BlackLivesMatter marches: “It’s really apples and oranges. Our religious leaders were the first to say it was not time to bring back services." pic.twitter.com/IG1wPP6w8T

“The protests were an entirely different reality, a national phenomenon, that was not something that the government could just say, you know, ‘go away,’ it’s something that really came from the grassroots. And obviously, it had profound meaning and we’re all acting on the meaning of those protests.”

“But it’s really apples and oranges,” de Blasio continued. “Our religious leaders were the first to say it was not time to bring back services. Now we’re doing it carefully, smartly. So I — I think that decision profoundly misses what the very religious institutions themselves were saying.”

“Governor [Andrew] Cuomo and Mayor de Blasio could have just as easily discouraged protests, short of condemning their message, in the name of public health and exercised discretion to suspend enforcement for public safety reasons instead of encouraging what they knew was a flagrant disregard of the outdoor limits and social distancing rules,” the judge wrote in his ruling.

“They could have also been silent. But by acting as they did, Governor Cuomo and Mayor de Blasio sent a clear message that mass protests are deserving of preferential treatment.”

Democrat leaders in general have treated Christians and small business owners with total contempt amid the COVID-19 pandemic by shaming them for endangering “public health,” but as soon as the Black Lives Matter riots and protests emerged, some of those same leaders, like Michigan Governor Gretchen Whitmer, were out marching with them!

The reality is the Democrats are using the coronavirus pandemic to further their own political agenda of economic and racial strife to hurt President Trump’s reelection chances.