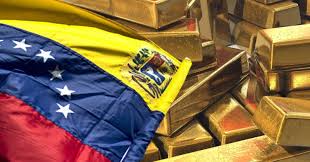 Because when the US picks Venezuela’s President, and when US allies go along with the Regime Change, why in the heck would Venezuela get its gold back?

(by Half Dollar) There’s that saying again.

Venezuela’s had one heck of a time trying to get a hold of its gold, and in full display of the entire world, everybody should be understsanding the takeaway here: Counter-party risk.

From just today, from the left’s favorite MSM Propagandist, CNN:

London (CNN Business)Venezuela’s embattled ruler Nicolás Maduro has been denied access to roughly $1 billion in gold reserves held by the Bank of England after a UK court ruled that the British government has recognized Juan Guaidó as president.

Venezuela’s central bank, which is still controlled by Maduro’s government, had sued the Bank of England, seeking access to €930 million ($1 billion) in gold reserves that it said would help the country cope with the coronavirus pandemic. Venezuela intended to liquidate the gold to purchase health care supplies and food through the United Nations Development Programme, according to court documents.

But the British government, along with the US government and dozens more worldwide, recognizes Guaidó, rather than Maduro, as Venezuela’s legitimate leader. Venezuela’s political turmoil stems from 2018, when Maduro secured another six-year term in presidential elections widely viewed as a sham.