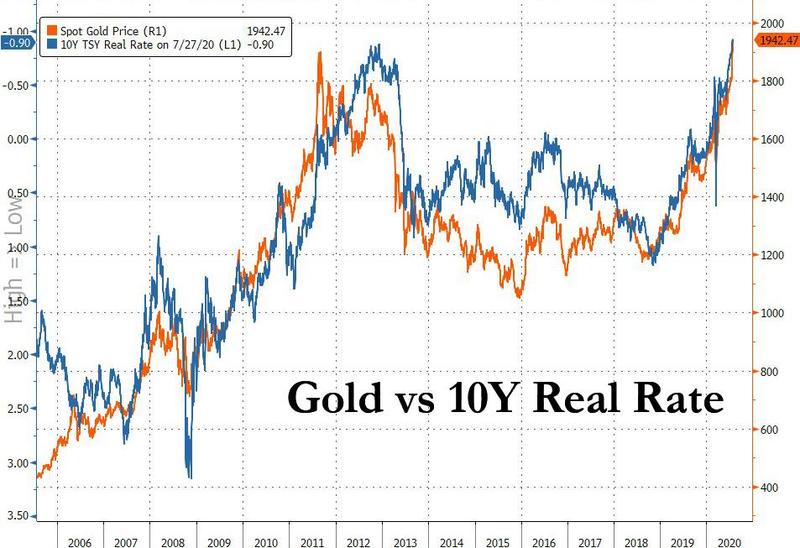 In his morning critique of goldbugs’ resurgent optimism about the future of gold, which has exploded alongside the price of precious metals, which in turn have been tracking the real 10Y rate tick for tick…

… Rabobank’s Michael Every argued from the familiar position of one who views the modern monetary system as immutable, and bounded by the confines of the dollar as a reserve currency and financial assets as a bedrock of modern household wealth, of which as Paul Tudor Jones recently calculated there is over $300 trillion worth, compared to just $10 trillion in total gold value.

Indeed, according to Every, the surge in gold is meaningless because “if you buy gold, technically that is going to make you money. And yet that money is still going to be priced in US DOLLARS – and that gives the whole game away.”

Like fans of the England football team, gold fans can dream of the distant past when gold was the centre of the global monetary system; but they can keep dreaming if they think those days are ever going to return. Gold may be an appreciating asset, but all the evidence suggests that it won’t be one that is of any direct relevance to day-to-day life, finance, and business. Your currency won’t be tied to it. You won’t get paid in it. You won’t spend in it or save in it (other than to the switch back to US Dollars). You won’t be doing deals in it or importing in it.”

Yes but… what if your currency ends up getting tied to it? What if you do get paid in gold? What if you save in gold without any intention of switching back to dollars?

In short, what if the dollar is no longer the world’s reserve currency?

Impossible you say… well, we would disagree. After all, in a world where there is over $100 trillion in dollar-denominated debt which can not be defaulted on and thus must be inflated away, the “exorbitant privilege” of the dollar has become a handicap. But don’t take our word: here is Jared Bernstein, Obama’s former chief economist warning all the way back in 2014 in a NYT op-ed that the US Dollar must lose its reserve status:

There are few truisms about the world economy, but for decades, one has been the role of the United States dollar as the world’s reserve currency. It’s a core principle of American economic policy. After all, who wouldn’t want their currency to be the one that foreign banks and governments want to hold in reserve?

But new research reveals that what was once a privilege is now a burden, undermining job growth, pumping up budget and trade deficits and inflating financial bubbles. To get the American economy on track, the government needs to drop its commitment to maintaining the dollar’s reserve-currency status.

Agree or disagree with Bernstein’s ideology, never has his assessment about the state of the American economy been more accurate than it is now.

To be sure, since then there have been a handful of other “serious” economists suggesting that the only way the US economy can “reboot” itself and reset its economic engine is for the dollar to lose its currency status, but it is only in the past few days – when the dollar plunged and gold soared to new all time highs – that we have seen a barrage of Wall Street reports contemplating what until recently was viewed as impossible: a world where the dollar is not the reserve currency.

Meanwhile, after its explosive burst higher in March and April, the Bloomberg Dollar Spot Index is on course for its worst July in a decade. The drop comes amid renewed calls for the dollar’s demise following a game-changing rescue package from the European Union deal, which spurred the euro and will lead to jointly-issued debt.

Which brings us to this morning, when none other than the world’s most influential investment bank Goldman Sachs, by way of its chief commodity strategist Jeffrey Currie, wrote that “real concerns around the longevity of the US dollar as a reserve currency have started to emerge.”

Specifically, Goldman looks at the recent surge in gold prices to new all-time highs which has “substantially outpaced both the rise in real rates…

… and other US dollar alternatives, like the Euro, Yen and Swiss Franc”…

… with Currie writing that he believes this disconnect “is being driven by a potential shift in the US Fed towards an inflationary bias against a backdrop of rising geopolitical tensions, elevated US domestic political and social uncertainty, and a growing second wave of covid-19 related infections.”

This, combined with the record level of debt accumulation by the US government, means that “real concerns around the longevity of the US dollar as a reserve currency have started to emerge.”

Then, Currie reminds his clients that he has “long maintained gold is the currency of last resort, particularly in an environment like the current one where governments are debasing their fiat currencies and pushing real interest rates to all-time lows, with the US 10-year TIPs at -92bp is 5bp below the 2012 lows,” and we indeed noted Currie’s reco to buy gold one day after the Fed went all-in on March 24.

Four months later, the urgency is even greater, and Currie writes that “with more downside expected in US real interest rates we are once again reiterating our long gold recommendation from March and are raising our 12-month gold and silver price forecasts to $2300/toz and $30/toz respectively from $2000/toz and $22/toz.”

There are other reasons why Goldman believes that Gold’s surge is only just starting: “This relentless decline in real interest rates against nominal rates bounded by the US Fed has caused inflation breakevens to rise (see Exhibit 3) in an environment that would ordinarily be viewed as deflationary, i.e. a weakening US labor market as the  country re-enters lockdown.”