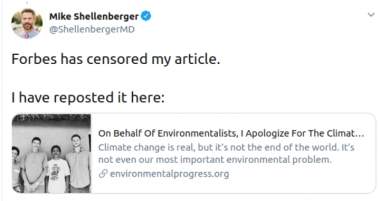 Forbes published an apology essay on Sunday by Michael Shellenberger, a former environmental activist, but for whatever reason — perhaps bowing to pressure from left-wingers on staff, or something else — the magazine has since removed it.

In the op-ed, Shellenberger explained, “I would like to formally apologize for the climate scare we created over the last 30 years.” Shellenberger added in a tweet on Monday, “On behalf of environmentalists, I apologize for the climate scare. Climate change is real but it’s not the end of the world. It’s not even our most important environmental problem.”

Fortunately, Shellenberger was able to publish his censored article — intended to promote his new book Apocalypse Never: Why Environmental Alarmism Hurts Us All — on his own on the Internet. Shellenberger has been a self-proclaimed climate activist for the past 20 years, and has testified before Congress on the subject. The Intergovernmental Panel on Climate Change (IPCC) has selected him to serve as an expert reviewer on its next Assessment Report.

“Some people will when they read this imagine that I’m some right-wing anti-environmentalist. I’m not.” To illustrate his liberal credentials, Shellenberger lists living in Nicaragua at age 17 to show solidarity with the Sandinista socialists, and the fact that he exposed “poor conditions” at Nike factories in Asia. At 16, he was a fundraiser for the Rainforest Action Network, fighting to save the ancient redwoods in California. He urged the Obama administration to invest $90 billion into renewables.

Over the years, Shellenberger has sounded the alarm over “climate change,” calling it an “existential threat” to human civilization. But he began to change his mind over the severity of what he had once called a crisis — because, as he said, “I was scared.”

Shellenberger’s fear was a result of being “afraid of losing friends and funding.” So, for some time, he “mostly stood by and did next to nothing as my fellow environmentalists terrified the public.”

But when U.S. Representative Alexandria Ocasio-Cortez said, “The world is going to end in twelve years if we don’t address climate change,” and Bill McKibben, the world’s most influential ‘green journalist,” said climate change was the “greatest challenge humans have ever faced” and that it would “wipe out civilizations,” Shellenberger decided he needed to speak out.

In his Forbes article, since censored, Shellenberger said that there are some facts that “few people know,” among them, “Climate change is not making natural disasters worse,” and that fires have actually declined 25 percent around the world since 2003. Forest fires seem worse, Shellenberger explained, because of the build up of wood fuel and the construction of houses near forests. While climate alarmists make much of carbon emissions, Shellenberger said that they are actually declining in most of the wealthier nations of the world.

Shellenberger also spoke in his article of the positive impact of warmer climate: “We produce 25 percent more food than we need and food supplies will continue to rise as the world gets hotter.”

Shellenberger’s book is 400 pages long, one-fourth of which are endnotes. It covers climate change, deforestation, plastic waste, species extinction, industrialization, meat, nuclear power, and renewables. In contrast to the radical environmentalist viewpoint, Shellenberger argues, “Factories and modern farming are the keys to human liberation and environmental progress.” Air pollution has been reduced, Shellenberger asserts, as industrialized society has moved “from wood to coal to petroleum to natural gas to uranium.”

In years past, one of the most well-known slogans of the environmental movement was “Save the whales,” but Shellenberger notes, “Greenpeace didn’t save the whales, switching from whale oil to petroleum to palm oil did.” In other words, the very progress that most environmentalists decry.

In the final three chapters of Apocalypse Never, Shellenberger exposes the financial, political, and ideological motivations of the environmentalist Left. “Environmental groups have accepted hundreds of millions of dollars from fossil fuel interests. Groups motivated by anti-humanist beliefs forced the World Bank to stop trying to end poverty and instead make poverty sustainable.”

Shellenberger traces modern environmental alarmism back to Thomas Malthus, who in the late 1700s argued that the rapid population increase brought on by the Industrial Revolution would lead to mass starvation. This theory — known as Mathusianism — “has been repeatedly debunked for 200 years and yet is more powerful than ever.” 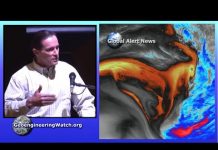