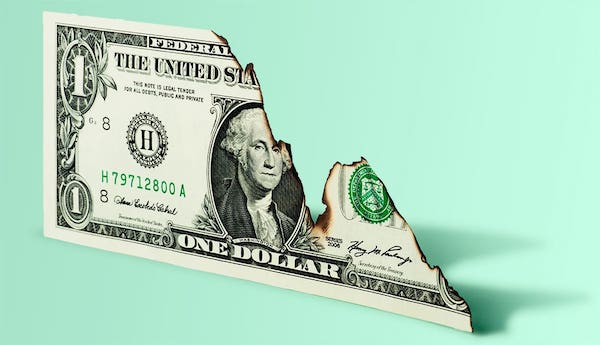 International Man: People have been warning of impending fiscal and monetary doom for a long time.

What is different now that will finally usher in the day of reckoning?

David Stockman: It is self-evident that the solution to a state-imposed supply-side shutdown of the economy is not more counterfeit money, erroneous price signals, inducements to rampant speculation and moral hazards, and further zombification of the main street economy.

Once upon a time, even Washington politicians feared large, chronic public debt, and not merely because they were especially intelligent or virtuous. We learned that in real time during 1981, when the deficit hawks among the GOP Senate college of cardinals nearly shut down the Gipper’s supply-side tax cuts out of fear of mushrooming deficits.

To be sure, these dudes didn’t know Maynard Keynes from Emanuel Kant, but they did know that Uncle Sam has exceedingly sharp elbows and that when he becomes too dominant in the contest for funds in the bond pits, private households and business borrowers get bloodied and crowded out.

That is to say, in the days before massive central bank monetization of the debt, there was a natural counter-balancing constituency in the equations of fiscal politics. We heard from them, too, in our congressional days when the car dealers, feed mill operators, tool and die shops, building contractors, restauranteurs and countless more main street businessmen of the Fourth Congressional District of Michigan let it be known loud and clear that Jimmy Carter’s big deficits were doing unwelcome harm to their bottom lines.

Nor was there any mystery as to why. Aside from the short-term expedient of foreign capital inflows that come at a heavy long-term price (chronic trade deficits and offshoring of production and jobs), the only honest source of funding for government deficits is private savings.

And when the latter—defined as household savings and retained corporate profits in the GDP accounts—are meager to begin with, an eruption of government borrowing squeezes out private investment completely, while raising the carrying cost of all existing floating-rate debt.

As it happened, by 1981, the US was already slouching toward the Big Squeeze of too little national savings and too much government borrowing. At an annualized run rate in Q2 1981, for instance, net private savings totaled $378 billion compared to net federal “dis-savings” (viz deficits) of $87 billion.

Thus, Uncle Sam was already absorbing 24% of savings, which would otherwise be available for investment in private sector growth.

The rest is history with a few twists along the way. As it happened, during the 1990s, the last generation of fiscal hawks in Washington got its revenge against the foolish abstractions of the Laffer curve and the bogus claim that you can grow your way out of large structural deficits.

On two occasions, therefore, first when George Bush the Elder moved his lips and signed a bipartisan deficit-reduction bill that included both spending cuts and tax increases and then when Bill Clinton did the same two years later, the Reagan structural deficits were substantially closed.

On top of that came two more fiscal windfalls. The first was a temporary fall in defense spending owing to the Soviet Union’s disappearing into the dustbin of history long before John Bolton and the rest of the neocon warmongers found a new enemy in Saddam Hussein and the basis for the massive defense buildup needed to conduct wars of invasion and occupation.

At the same time, Greenspan’s first round of madcap money printing, which generated a huge windfall of capital gains revenues in the late 1990s, touched off a tech-based stock market boom. So, there were three consecutive budget surpluses at the turn of the century, and that did mightily, albeit temporarily, relieve the “crowding out” effect of large government deficits.

During Q4 2000, for instance, private savings posted at a $458 billion annual rate, and that was accompanied by an actual $150 billion federal surplus.

At the time, so-called advanced thinkers in Washington, like Alan Greenspan, even began gumming about the possibility that the federal debt would be fully paid off in about 10 years’ time.

And then the Fed would have allegedly found itself unable to conduct monetary policy. Heaven forfend, there would have been no government paper available to monetize via purchases from Wall Street dealers paid for with digital credits plucked from thin air!

A high-class problem, that, but it is not one which remotely materialized. The next round of Greenspan money pumping blew up the housing and credit markets, even as two unfinanced GOP tax cuts and two unfinanced wars brought back the Reagan deficits with a vengeance.

Thus, by the eve of the financial collapse in Q4 2007, private savings stood at $618 billion (annualized rate) while the structural deficit (it was not cyclical because the economy was then at practical full employment) had ballooned to $324 billion.

Needless to say, it only got worse from there, with government dis-savings reaching a $1.37 trillion annual rate at the bottom of the Great Recession in Q1 2010, which amounted to fully 95% of private savings of $1.44 trillion.

Thereafter, of course, the macro-economy experienced a simulacrum of recovery. By Q4 2013, the cyclical elements of the deficit had been reduced modestly, causing annualized borrowing to fall to $531 billion or 38% of net private savings of $1.39 trillion.