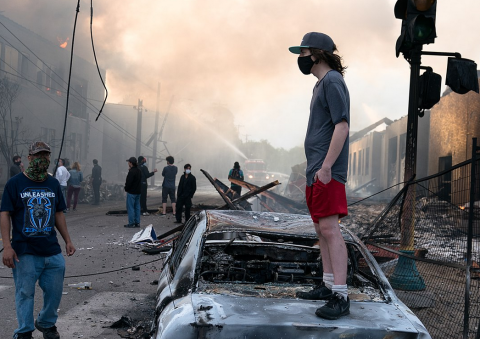 There were many reasons to oppose the COVID-19 lockdowns.

They cost human lives in terms of deferred medical treatment. They cost human lives in terms of greater suicide and drug overdoses. Domestic abuse and child abuse have increased. There is also good reason to believe that lockdowns don’t actually work. The lockdown activists capitalized on media-stoked fear to push their authoritarian agenda based not on science, but on the whims of a handful of experts who insisted that they need not present any actual evidence that their bizarre, draconian, and extreme scheme was worth the danger posed to human rights, health, and the economic well-being of billions of human beings.

Those who lacked the obsessive and irresponsible tunnel vision of the prolockdown people warned that there were other dangers as well, in terms of social and political conflict.

It didn’t require an especially clear crystal ball to see that destroying the livelihoods of countless millions while empowering a police state to harass and arrest law-abiding citizens would create a situation that maybe—just maybe—could lead to greater social and political conflict.

Specifically, there are three ways in which the lockdowns laid the groundwork for our current state of unrest.

The Lockdowns Created an Economic Disaster

The COVID-19 stay-at-home orders, business closures, and other forms of coerced social distancing have so far led to job losses for well over 30 million Americans. The unemployment rate has risen to levels not seen since the Great Depression. Food banks are under strain as Americans line up for free food. Thanks to government moratoria on evictions in many areas, it is still unknown to what extent homeowners and renters are unable to pay mortgages and rents, but a wave of delinquencies is almost certainly coming.

To advocates of lockdowns, this is all “worth it” even though these sorts of economic stresses often lead to suicide, stress-induced disease, and death. But impoverishment, unemployment, and financial ruin are all merely “inconvenient,” as described by head lockdown advocate Anthony Fauci.

To someone who isn’t enamored of lockdowns, however, it is clear that millions of job losses are likely to worsen a variety of social ills, sometimes even resulting in violence. Moreover, the current job losses appear to be affecting the young and those who earn lower incomes most.

Lockdown advocates have attempted to avoid responsibility for all this by claiming that it is the pandemic itself that has caused the current economic disaster, and not the lockdowns. This is a baseless assertion. As has been shown, neither the pandemics of 1918 or 1958 led to the sorts of job losses and decline in economic growth that we’re now seeing.

Another outcome of the lockdowns has been the destruction of American social institutions. These institutions include schools (both public and private), churches, coffee shops, bars, libraries, barbershops, and many others.

Lockdown advocates continue to claim that this is no big deal and insist that people just sit at home and “binge watch” television shows. But researchers have long pointed to the importance of these institutions in preserving peace and as a means of defusing social tensions and problems.

As much as lockdown advocates may wish that human beings could be reduced to creatures that do nothing more than work all day and watch television all night, the fact is that no society can long endure such conditions.

Human beings need what are known as “third places.” In a 2016 report, the Brookings Institution described what these places are:

the most effective ones for building real community seem to be physical places where people can easily and routinely connect with each other: churches, parks, recreation centers, hairdressers, gyms and even fast-food restaurants. A recent newspaper article on McDonald’s found that for lower-income Americans, the twin arches are becoming almost the equivalent of the English “pub,” which after all is short for “public house”: groups of retirees meeting for coffee and talk, they might hold regular Bible study meetings there, and people treat the restaurant as an inexpensive hangout.

Third places have a number of important community-building attributes. Depending on their location, social classes and backgrounds can be “leveled-out” in ways that are unfortunately rare these days, with people feeling they are treated as social equals. Informal conversation is the main activity and most important linking function. One commentator refers to third places as the “living room” of society.

The lockdown advocates, in a matter of a few days, cut people off from their third places and insisted, in many cases, that this would be the “new normal” for a year or more.

Yet, these third places cannot simply be shut down—and the public told to just forget about them indefinitely—without creating the potential for violence and other antisocial behavior.

Indeed, third places act as institutions that provide a type of social control that is key to a well-functioning society. In his trenchant book The Revolt of the Elites and the Betrayal of Democracy, historian and social critic Christopher Lasch described the importance of third places in communicating political and social values and conventions to young people, and in setting the bounds of acceptable behavior within the community. Lasch notes that these institutions are also important in defusing violent impulses among the young. Also of great importance is the fact that third places provide a means of social control that is voluntary and not a form of state coercion.

Writing in the 1990s, Lasch was lamenting the decline of third places, although he emphasized their importance even in their modern reduced form. Thanks to the lockdowns, however, these places have been crippled far beyond what Lasch might ever have imagined.

The Lockdowns Empowered the Police State

The lockdowns have created a situation in which millions of law-abiding citizens have been deemed criminals merely for seeking to make a living, leave their homes, or engage in peaceful trade.

In many areas, violations of the lockdown orders have been—or even still are, in many places—treated as criminal acts by police. This has greatly increased negative interactions between police and citizens who by no moral definition are criminals of any sort.

Complicating the issue is the apparent fact that police have not enforced social distancing edicts “uniformly.” Some have alleged, for example, that the NYPD has lopsidedly targeted nonwhites in enforcement:

of the 40 people arrested [for social distancing violations in Brooklyn between March 17 and May 4], 35 were African American, 4 were Hispanic and 1 was white. The arrests were made in neighborhoods—Brownsville, Bedford-Stuyvesant, Cypress Hills and East New York—which have large concentrations of blacks and Latinos.

This may or may not reflect the reality of the general situation, but the fact is that the lockdowns created the perception among many that this is just yet another case of law enforcement targeting certain populations over small-time violations.

Moreover, it is quite plausible that lower-income populations have more often been on the receiving end of state harassment in the name of social distancing. After all, compliance with lockdowns is something of a luxury reserved for higher-income, white-collar residents who can work from home and remain comfortable for long periods in their roomy houses. Working-class people and those with fewer resources are far more likely to need to find income and venture outside during lockdowns. This attracts the attention of police.

Lockdown advocates, apparently in their usual state of extreme naïvete, perhaps believed that further empowering police to violently enforce government decrees against petty infractions would not lead to any unfortunate side effects down the road. Yet criminalizing millions of Americans and subjecting them to heightened police harassment is not a recipe for social tranquility.

Of course, my comments here should not be interpreted as making excuses for rioters. Smashing up the property of innocent small business owners—or worse, physically harming innocent people—is reprehensible in all circumstances. But this isn’t about making excuses. We’re talking about avoiding extreme and immoral government policies (i.e., police-enforced lockdowns) that remove those institutions and conditions which are important in helping minimize conflict.