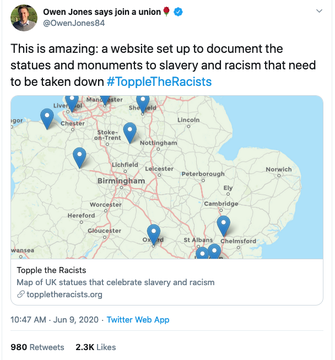 Leftists in the UK have expressed their desire to topple a statue of Charles, 2nd Earl Grey, a former British Prime Minister, despite the fact that he oversaw the abolition of slavery in the British empire.

Since the toppling of a statue in Bristol of “slaver” Edward Colston in Bristol and the desecration of Winston Churchill’s statue in London, Black Lives Matter supporters are salivating at the prospect of what historical monuments they can tear down next.

One of those on the list is that of Charles Grey, 2nd Earl Grey, a long-time leader of multiple reform movements under whose government slavery was abolished in the British empire.

“They want to topple the statue of the guy who abolished slavery,” tweeted author Christopher Snowden.

They want to topple the statue of the guy who abolished slavery. 🥴 pic.twitter.com/XH2iyC9CIO

Meanwhile, London Mayor Sadiq Khan has vowed to conduct a review of statues in London and tear down any that don’t properly represent the city’s “diversity.”

Khan has completely failed to stop the English capital’s epidemic of knife crime, which is mainly black people killing other black people, but he’s on the ball when it comes to removing “racist” monuments.

As we highlighted earlier, statues of Belgium’s longest-serving monarch are now being removed in response to BLM demonstrations.