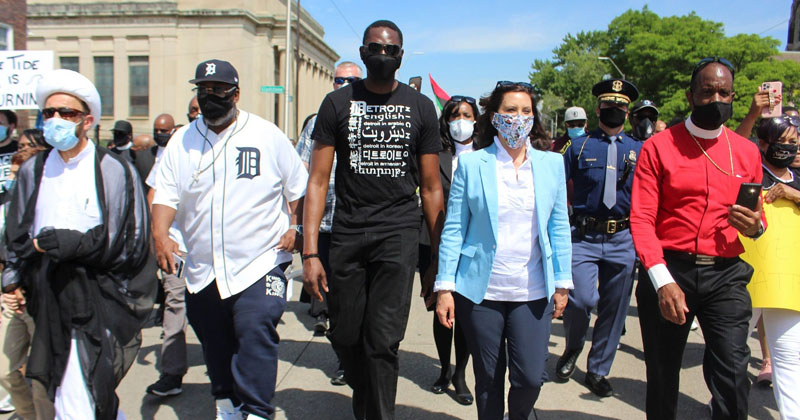 In another stunning act of hypocrisy, Michigan Democrat Governor Gretchen Whitmer went out in the streets to march with throngs of Black Lives Matter protesters after lecturing small businesses for weeks to stay shut down in the name of fighting the coronavirus.

You can’t make this stuff up.

Last week, Whitmer scolded the Justice Department for urging her to allow businesses to reopen, saying, “the worst thing we can do is open up in a way that causes a second wave of infections and death, puts health care workers at risk, and and wipes out all the progress we’ve made.”

Today, I issued the following statement in response to the U.S. Department of Justice issuing a statement of interest, which seeks to undermine the health and safety of Michigan residents.
Read more below ⬇️⬇️⬇️ pic.twitter.com/Uk4vKnAZKc

But just days later, Whitmer was out in the streets marching shoulder to shoulder with protesters chanting “Hands up, Don’t Shoot.”

To those who have taken to the streets to peacefully protest the structural inequities Black Americans face every day – I’m with you.

Tonight, I urge you to stay home and stay safe. Tomorrow, find a peaceful protest to join and make your voice heard. pic.twitter.com/O8fNNVM8fS

The biggest hypocrite of the day goes to @GovWhitmer, who violated her own social distancing guidelines at a protest march after telling the state that protesting would bring a surge of the #COVIDー19 virus.

This is Gretchen Whitmer.
She threw Michigan residents in jail and stripped them of their livelihoods if they did not “social distance.”
She called a group of peaceful protesters “terrorists.”
In case you were still wondering if the lockdowns were a vicious hoax to hurt Americans pic.twitter.com/PoOnuQFAke

Remember, this is the same Democrat governor who called small business owners “racist” and “neo Nazis” for protesting her lockdown orders.

As we’ve reported, social distancing has gone to the wayside for the left now that they have protests to help foment.