“Why should Russia have all the fun?”

In what should only be considered to be nothing short of a major psychological operation ran by the bought and paid for Democrat-swayed Bill Gates-funded multimedia conglomerate MSNBC during a segment of the Rachel Maddow Show on Monday–Hillary Clinton and Rachel Maddow called for the “hypothetical” help of the Chinese in the latest attempt by the powers-that-be to program the masses and create more chaos in America.

Both Clinton and Maddow reveled in glee while they presented their twisted script on-air.

The duo’s hypothetical scenario suggests in a nutshell that since the Russians aided the Republicans during the 2016 election then the Chinese should aide the Democrats in 2020.

“Why should Russia have all the fun?” Clinton asked. “…since Russia is clearly backing the Republicans–why don’t we ask China to back us?”

@HillaryClinton is now calling for China 🇨🇳 to back @TheDemocrats! You can’t make this stuff up! pic.twitter.com/7Ky2DN9khq #MAGA

“Not only that,” she added. “China–if you’re listening–why don’t you get Trump’s tax returns–I’m sure the media would richly reward you.”

The two could be seen on the segment carefully dancing around and spouting about their hypothetical nonsense in which Clinton claims that there is “nothing wrong with.” 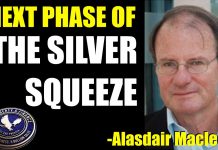 Next Phase of The SILVER SQUEEZE | Alasdair Macleod