The exact same group of U.S. people who were promoting the mid-east Arab Spring in 2010 are the same people now promoting the 2020 Black Lives Matter protests.   The same politicians; the same media voices; the same newspapers; the same social media activists. Almost every participant, and their support for the uprising ’10 -vs- ’20 is identical.

In the background of the Arab Spring, the root control organization was The Muslim Brotherhood.  Considering all of the connective similarities; and considering the U.S. advocates for the brotherhood are the same voices advocating for BLM; does it not stand to reason the BLM movement is an extension of the same overarching ideology.

It is not an esoteric intellectual exercise to compare the two movements because we’re not only talking about a similar level of protest, we’re seeing an identical set of actions in both groups.  Not only are the advocates the same voices; but their purposeful action, the behavior to remove and destroy common cultural connection/heritage is the same.

The Brotherhood is essentially the umbrella organization for a multitude of Islamic factions.  In essence, the Muslim Brotherhood represents political Islam. Similarly if you look at the structure of Black Lives Matter they too represent an umbrella-type structure for a network of individual political grievance groups.  Both groups represent a cultural revolution by the results of their activity.

In 2010 the Brotherhood was very strategic as they hoodwinked moderate Islamic supporters into voting them into power.  Once in power they removed all of the institutional systems, government offices, judges, constitutional balances, local elections, and anything that would impede their ultimate stranglehold on power.  Sharia Law replaced common legislative law.   As a result, the ordinary population was brutalized, property was taken by force; businesses were taken by force and the Islamic regime now controlled every element of their lives.

In 2020 the approach of the BLM movement appears very strategic as they hoodwink a multitude of supporters by defining their victim class and role.  Much like the 2010 Brotherhood approach grievances are made personal.   Bonds between families and friends are severed by force and demands to adhere to the movement’s ideology.

It will be interesting to see if BLM supporters recognize the deception in 2020; because the Brotherhood supporters in 2010 did not recognize it until it was too late.

There are many similarities.

Are You Willing To Suffer Through A Recession For The Good Of “The Liberal World Order”? 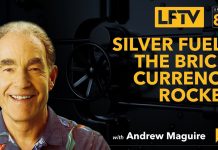