As we commemorate the 25th anniversary of the Oklahoma City bombing, the worst incident of domestic terrorism in our nation’s history, we now know for certain that our government’s public account and explanation of circumstances surrounding that heinous crime was bogus. The truth lies in a suppressed version of events, one which was described by President Bill Clinton’s General Counsel Abner Mikva as “not information that should be on paper.” (Emphasis added.)

This article will for the first time present key elements of that suppressed information, on paper for the public.

For such an order to be issued by Mikva, the Oklahoma City bombing must have posed what can only be described as a mortal threat to Clinton’s political future, and to the reputation of many federal agencies involved.

During my Marine Corps career with nearly five years with the Joint Chiefs of Staff and the Office of the Secretary of Defense, I have seen our nuclear war-fighting plans as well as our most sensitive intelligence reports – both were “on paper.”

The account offered here is the result of 24 years of research on my part, including 11 years of working closely with the legendary McCurtain Daily Gazette reporter, J.D. Cash, and collaborating with dozens of other professional and citizen journalists committed to uncovering the full truth behind the Oklahoma City bombing and its aftermath.

Whatever Mikva ordered not to be put “on paper,” was seen as more threatening to his client, the president, than the compromise of any other information in the entire U.S. government. But, as is the case of any federal government cover up, information was spread far too widely among various agencies for Mikva’s edict to be completely effective.

Over the past 25 years records have been released, often in seemingly unrelated cases, which have provided key elements of this mosaic – enough for us now to piece together the core of the damaging information of such concern to the president’s senior legal adviser.

OKBOMB, as the FBI titled the case, was the result of a federal law enforcement operation that went terribly wrong for reasons still unknown.

Suppressing information about this ugly truth was Mikva’s objective when he issued his extraordinary order to go off paper. Released as a memorandum on letterhead marked, “EXECUTIVE OFFICE OF THE PRESIDENT,” the date was May 25, 1995, five weeks after the bombing and after the case had supposedly been solved. 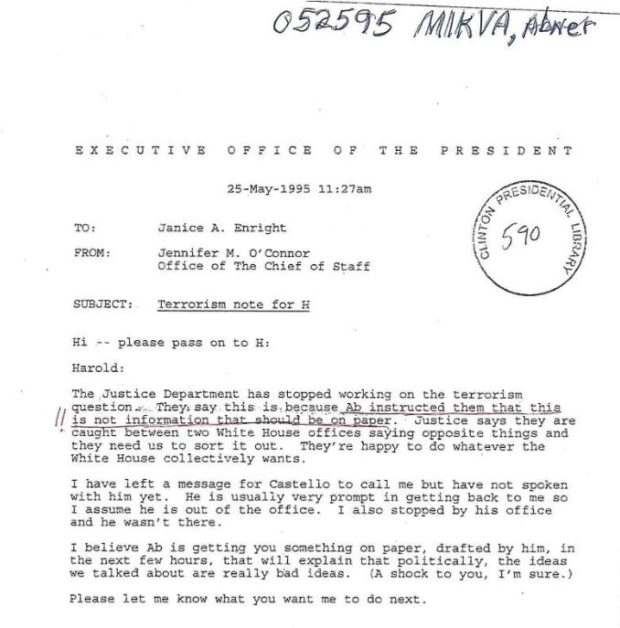 This date was exactly three weeks after this newspaper published J.D. Cash’s first story on OKBOMB. Timothy McVeigh and Terry Nichols were in jail awaiting trial. Bombing conspirator and white nationalist Michael Fortier had agreed to be the star prosecution witness against his former Army buddies.