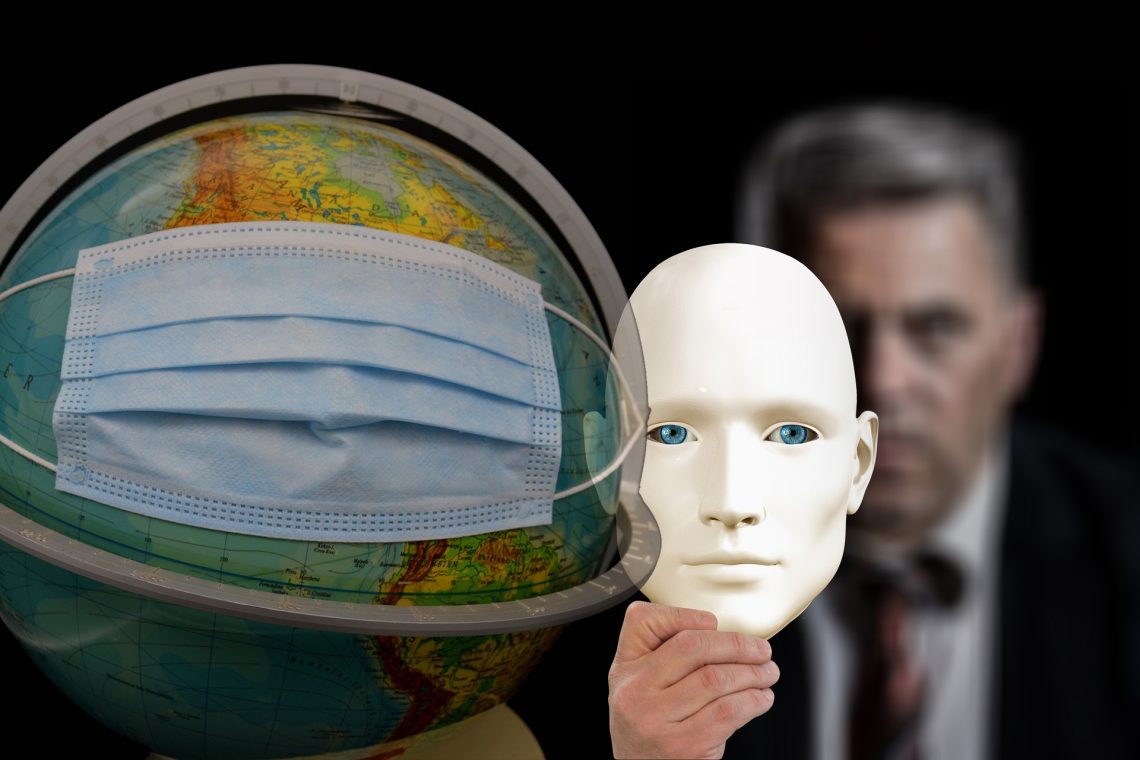 Their modeling systems were wrong. Their numbers were highly exaggerated. Despite this, they were prepared to go all the way – to escalate a virus to astronomical proportions so they could shut this country down, shut the world down, and attempt to control all populations into submission through fear tactics and mind games. Why? What do they have to gain? Their masks came off when they began trying to control the minds of millions by feeding a deceptive narrative, moving for mail-in ballots to manipulate the upcoming elections, shutting down the economy while deciding who’s business was “essential” and who’s was “non-essential,” using tactics to keep people in a state of fear to make them vulnerable so they will heed the advice of so-called “experts” when a vaccine is deployed, creating a trillion dollar industry, all while simultaneously putting a halt to all protests, conferences, and rallies.

Essentially, the goal is to destroy America and install a new President that can drive them to their end game. Ultimately, when everyone was told to put on masks, their masks came off, and all was revealed. Most people see right through their charades, if for no other reason, because they have been illegally forced to close their “non-essential” businesses, lost their jobs, can no longer feed their families, and can see the unnecessary lengths they have gone to try to destroy EVERYONE, as they witness the real plague – tyranny! For those who are still trapped in the false narrative, and are complying to all rules out of fear, that fear needs to be checked against reality, as all of the evidence is out there.

The Washington Post wants everyone to believe that masks are a new fashion trend and have even brought Disney into the fold, trying to make this seem fun while declaring “masks are here to stay!” They use the word “solidarity” to make everyone feel as though they are a single unit working together to heal the world, when what they really mean is, “we believe you are all sheep and will listen to anything we tell you, so we will continue to program you to our benefit.”

The irony is, despite the legacy media and governors trying to “order” people to wear masks under the guise of “it’s for everyone’s safety and if you don’t do it you may die or kill other people,” the CDC and Dr. Fauci themselves have flat out said THEY WON’T PROTECT YOU.

When Vice President Pence was asked by Brett Baier at a Town Hall on May 3rd, about why he chose not to wear a mask when visiting the Mayo Clinic, his response was, “well from early on the CDC has made it clear that you wear a mask to prevent you from conveying the coronavirus to other people, and since the President and I are in the unique position we are in, we’re tested often.”

In an interview with CBS, NIAID Director Dr. Fauci, who is a part of the COVID-19 Task Force, clearly stated,

“There’s no reason to be walking around with a mask. When you’re in the middle of an outbreak wearing a mask might make people feel a little bit better, and it might even block a droplet, but it’s not providing the perfect protection people think that it is.”

The fact that he stated this in March versus April is totally irrelevant. He is an immunologist, and this is a clear cut statement that cannot be walked back.

It “might make people feel a bit better,” he said. Meanwhile, there are hundreds of thousands of people who are having incredibly adverse effects from wearing the masks. It’s hard to imagine why so many people would be dealing with anxiety, PTSD, claustrophobia and other traumatic issues in this country (sarcasm), but wearing these masks are a big trigger for them. That would be classified as a mental disability. There are also people with physical disabilities such as asthma or respiratory issues and the masks make it difficult for them to breathe. Furthermore, there are some people whose jobs require heavy lifting, and it’s causing them a great deal of dizziness, not to mention those that wear protective goggles or glasses are having to deal with them constantly fogging up. And, there are those with other debilitating physical issues where the masks create more problems, including those with hearing deficiencies that need to be able to read lips, which is tricky to do when everyone is sporting a mask. According to the CDC, wearing masks for long periods of time, for example an 8-hour work shift, can cause headaches. The CDC contends it will not cause hypercapnia, though there is a lot of controversy over this.

Taking all of the above into consideration, the most telling of all is the fact that not only do these masks not protect people, they would need to be sterilized on a regular basis, and by wearing the same mask over and over each day, if anything – they act as bacteria and virus collectors. Therefore, if they do not protect people, they cannot be sterilized, and are collecting bacteria, WHY are governors insisting people where them in public places? Only one conclusion can be drawn from this – it is all for show to perpetuate the fear and keep the stigma in people’s minds to prep them for an incoming vaccine, while doing whatever they can to prevent rallies and in-person voting for the elections. If this isn’t obvious yet, then you need to start using your brain and stop letting them use it for you.

So what can you do? What rights do you have when you are being told you MUST wear a mask to enter a public store, that the experts have already confirmed will not protect you? Some very smart people have been sharing this across social media, and Corey took the time to review it to see if it is in fact justifiable in this particular case. It is very cut and dry and more people need to be made aware of this. If you feel like you need to wear a mask because you have a compromised immune system or are elderly, that is your choice, but everyone should be made aware of their rights.

You can grab the jpg image below and print it out to carry with you for your convenience. The bottom line is – if you have a mental or physical disability that prevents you from wearing a mask, no public facility or store can discriminate against you and require you to leave, especially a grocery store which is required for your survival. You do not have to tell them what your disability is. That being said, one would suspect that if a lot of people start acting on their rights, it’s going to create an issue and mayors or governors may try to step in and implement another executive order that states you are a danger to others and therefore you must have someone else do your grocery shopping for you. But that’s just not realistic, and they know this, so it will be interesting to see where this all goes. In regard to business owners mandating masks via governors’ orders, the employer may very well instruct the employee to leave the place of work with unpaid leave because there are no “accommodations” that could be provided that would replace the mask requirement. Whether or not there is legal basis for this would be a question for an attorney. This of course, could create a whole other issue for those seeking to go back to work, who are unable to wear a mask.

Their Masks Came Off – It’s All About Perception Now

Not only do these scoundrels who preach to wear a mask, not wear one themselves, many don’t even abide by their own rules, such as IL Gov. Pritzker’s wife taking a trip to Florida. Of course, the rules don’t apply for them and Pritzker verbally attacked a reporter for daring to question him on it. NYC Mayor DeBlasio is targeting the Jewish community while NY Gov. Cuomo has sent people off to their deaths at nursing homes while neglecting patients at hospitals, and is now touting that the education system should be “reimagined” and built back better, and he plans to work with the Bill & Melinda Gates Foundation to develop a blueprint to do this. Sure, why not? Gates already has his hands in every single cookie jar across the globe, with no exaggeration.

Never forget, they create the illusions to give a false reality to a situation or narrative so as to alter your perception and keep you in fear and under their control. How many ways do they accomplish this?

Recently, CBS added fake patients to a testing area to create the appearance of a longer line. There were only a few actual people there to get tested and they were made to wait so CBS could stage this. These people are disgusting! Link to full video.

The social media giants continue to censor and shadowban. It doesn’t matter whether you have a small following or a huge following, twitter will remove likes, followers, and reduce both the retweets and comment count – and they do this in real time right before your very eyes. President Trump gets the extra special treatment with mass scale reduction in numbers. He has been averaging 100,000 new followers every 48-hrs over the past couple of weeks. Just imagine what the real numbers are, based on the thousands of retweets and likes they remove? Facebook and YouTube are removing anything and everything they determine goes against the narrative, especially if it’s COVID related and you point out negative facts about the World Health Organization. Oh yes, they are all working overtime to hide the truth from everyone.

The term “essential business” is not new. Most people are just now hearing about this, as it’s being used to disqualify all of the other “essential” businesses by simply making the claim “they are not essential.” Over a decade ago, Google changed their algorithms and pushed this very tactic in the online retail world. So for those who had online businesses that were “essential” for their survival, Google decided they were “non-essential” and pushed all of the big name stores to the top of the search results, deeming them more “essential” for shoppers. This is not new, they merely brought it from the cyberworld to the real world, to crush all of the little guys, while driving more business to their cohorts stores.