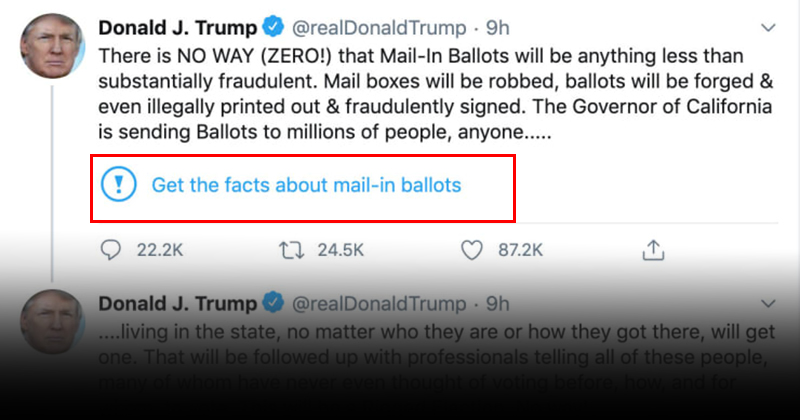 “Twitter is completely stifling FREE SPEECH, and I, as President, will not allow it to happen!”

President Trump warned Tuesday that the election will be ‘rigged’ by Democrats using the pandemic to justify mail-in voting, and Twitter slapped a ‘fact check’ label on the post.

“There is NO WAY (ZERO!) that Mail-In Ballots will be anything less than substantially fraudulent,” Trump tweeted.

“This will be a Rigged Election. No way!” the president proclaimed.

There is NO WAY (ZERO!) that Mail-In Ballots will be anything less than substantially fraudulent. Mail boxes will be robbed, ballots will be forged & even illegally printed out & fraudulently signed. The Governor of California is sending Ballots to millions of people, anyone…..

Trump cited California’s governor Gavin Newsom signing an executive order to ensure all voters will receive mail ballots for the election in November.

“Mail boxes will be robbed, ballots will be forged and even illegally printed out and fraudulently signed,” Trump urged.

They contend that the move to an all mail in vote system is unconstitutional.

Trump declared that Democrats will use the opportunity to lobby people into giving them their votes.

“That will be followed up with professionals telling all of these people, many of whom have never even thought of voting before, how, and for whom, to vote,” he asserted.

Trump’s tweet was subsequently ‘fact checked’ by Twitter, with the company putting a warning label below it stating “Get the facts about mail-in ballots,” with a link to a page that states “Trump falsely claimed that mail-in ballots would lead to ‘a Rigged Election.’ However, fact-checkers say there is no evidence that mail-in ballots are linked to voter fraud.”