WHY DOES THIS MANIAC STILL HAVE A JOB?

As we know from previous reporting:

** Dr. Tony Fauci and Dr. Deborah Birx used the Imperial College Model to persuade President Trump to lock down the ENTIRE US ECONOMY.
** The fraudulent model predicted 2.2 million American deaths from the coronavirus pandemic
** The authors of the Imperial College Model shared their findings with the White House Coronavirus task force in early March

** Dr. Fauci and Dr. Birx then met with President Trump privately and urged him to shut down the US and destroy the record Trump economy based on this model
** New analysis of the Imperial College Model finds the study is “completely unusable for scientific purposes” — The Imperial College study was a complete sham
** Dr. Fauci and Dr. Birx pushed a garbage model on the White House and the American public and destroyed the US economy

As reported weeks ago — in mid April Dr. Fauci admitted that it was he and Dr. Birx who persuaded President Trump to lock down the US economy knowing the massive destruction this would cause in jobs, lives and commerce.

President admitted that during a press conference in April that “two very smart people” came into his office and urged him to lock down the economy or 2.2 million Americans would die from the China virus.

This guy has been wrong nearly every step of the way.

Dr. Anthony Fauci: “I can tell you, the first and only time that I said we should do mitigation strongly, the response was, ‘yes, we’ll do it.'” https://t.co/OoYDesvZU4 pic.twitter.com/k5IaxkiiBc

After Dr. Birx and Dr. Fauci sat with the president the US went into lockdown and since that time over 39 MILLION Americans have lost their jobs and thousands of companies have gone bankrupt.

In late March, Neil Ferguson, who was behind the Imperial College coronavirus study, backtracked and said 20,000 Brits may die from the coronavirus instead of his original estimates of 500,000.

Neil Ferguson resigned from his government post as researcher a week ago after he was caught breaking his own lockdown rules by meeting with his married mistress at his home. 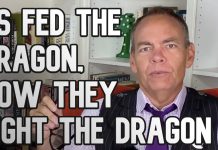