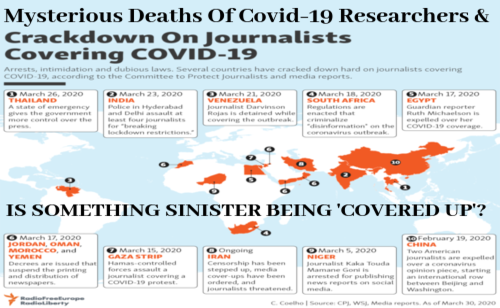 Dating all the way back to 1994, Steve Quayle has kept a fascinating two-part list of mysteriously dead scientists, microbiologists, infectious disease experts and other ‘medical experts in their particular fields’ and we have to report that Covid-19 has brought us at least two more such mysterious deaths after two ‘trailblazing’ Covid-19 researchers were found dead in less than a month.

As Zero Hedge reports in this new story, “outside of academic circles, Dr. James Taylor and Dr. Bing Liu were relative unknowns. Inside of the scientific community, however, the two had achieved something like rock-star status. And now, within a period of 30 days, both young men are dead at a time when their talents are needed most.”

Both very young with Bing Liu only 37 years old while Taylor was only 40, the cause of Taylor’s death remains unknown while Liu was allegedly murdered due to being in a ‘love triangle’ with his killer though as the Daily Mail had reported of Liu’s death, he was allegedly on the verge of a major discovery regarding this coronavirus pandemic.

With China leading the way in Covid-19 censorship ever since the beginning of this pandemic with the Chinese Communist parties lies and deception allowing the virus to spread as was reported in this May 19th Daily Journal story, and the mainstream media here in America largely echoing the Chinese Communist party line on this entire fiasco, the world may never get the truth. So first, from this new story over at the Daily Journal before we continue.

When the first cases of COVID-19 emerged in the Chinese city of Wuhan last December, local doctors tried to sound the alarm. Unfortunately, they were silenced by Chinese government officials who were more interested in saving face than taking responsibility for the outbreak. One of the doctors, Li Wenliang, was reprimanded by local police and ordered to stop “spreading rumors.” He and his colleagues were denounced on state-run television. Weeks later, Dr. Li died of the virus at age 34.

Dr. Li’s inner circle was not alone in being suppressed. In early January, Chinese scientists received a gag order from their government ordering them to destroy samples of the virus. The government began censoring news of the virus online and delayed entrance of a group of international health officials. There is also strong evidence they tried to influence early decision-making by the World Health Organization. But perhaps worst of all, China allowed international flights to continue from Wuhan even as travel within China was being shut down. This raises questions as to why China would knowingly put the world’s health at risk. 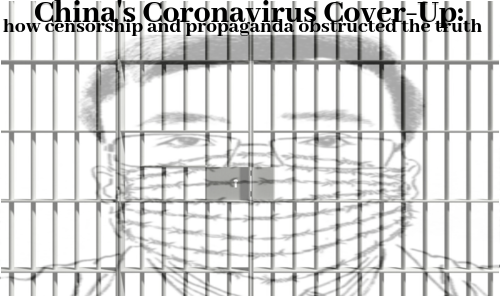 As The Conversation had reported in this story titled “China’s coronavirus cover-up: how censorship and propaganda obstructed the truth” about Dr. Li, after his death, the phrase “We want freedom of speech” was even trending on Chinese social media for several hours before the posts were deleted.

Considered a ‘rebel’ for speaking out about the virus prior to it overtaking America and much of the world, Dr. Li was chastised prior to his death, called a ‘rumour-monger’ for putting out information that went against the ‘official line’, even though it eventually turned out his warnings were correct.

Dr Li had told fellow medical professionals about the new virus in a chat group on 30 December. He was accused of “rumour-mongering” and officials either ignored or played down the risks well into January.

“If officials had disclosed information about the epidemic earlier,” Dr Li told the New York Times, “I think it would have been a lot better. There should be more openness and transparency”.

Yet here we are in America, nearly 6 months after Dr. Li’s warnings, and we’re witnessing a mainstream media that continually echoes the Chinese communist party line on covid-19 and now, several mysteriously dead covid-19 researchers who were allegedly on the verge of a breakthrough. What might these researchers have found out? We’ll certainly never learn from the msm here in America. From this story over at Zero Hedge.

Academia does not really have a reputation for being riddled with violence and sudden unexplained deaths. Yet at the peak of the Covid-19 pandemic, two young pioneering researchers from the same obscure field of study met with mysterious ends.

The question that must be asked is whether James Taylor was somehow working at cross-purposes to other organizations that are, for example, in the race to develop a vaccine against Covid-19. Or, alternatively, did the 40-year-old renowned researcher die a natural death at the very moment the quest for a vaccine against the coronavirus had become the central focus for researchers, pharmaceutical companies and his very alma mater?

So what we are left with, at a time when the world is desperately searching for a way to combat Covid-19, is the legacy of two trailblazing researchers who were both working towards ways of better understanding the disease. Although we may never know the true story behind each man’s untimely death, the likelihood of two renowned researchers – with almost identical professional backgrounds – dying a month apart at a time when both were making headway against the pandemic must certainly rank far less than the chances of someone actually succumbing to Covid-19. The deaths of Bing Liu and James Taylor deserve far greater scrutiny by the mainstream media. 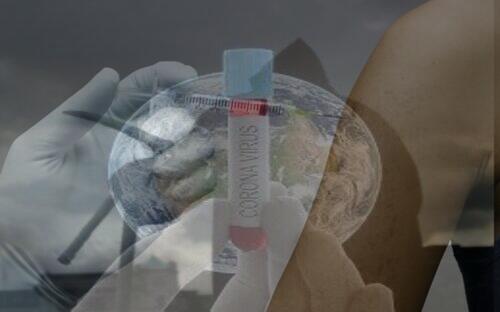 With history having proven that the ‘deep state’ has never been shy about using assassinations to take out their political enemies, the attempt to take down Donald J. Trump’s presidency via impeachment having completely blown up in Democrats faces and now, the slight possibility that some members of the Obama administration/deep state might face prosecutions for their ‘attempted coup’ (though we’ll never hold our breaths waiting for that!), along comes ‘covid-19’ to take attention away from the Democrats treason.

As we’d reported in this May 12th ANP story titled “The Covid-19 Distraction: While Americans Were Hypnotized By Covid-19, This Is What We Were Missing”, this entire pandemic has taken the eyes and minds of Americans largely away from ‘the truth’ that is being exposed about the attempted coup that has taken place for the past 4 years. And with the msm surely never to report upon any of that because they were arguably largely guilty of treason themselves, the ‘covid-19 pandemic’ could be the globalists last shot to regain control of the narrative, outlaw free speech as has already happened in China while giving them an opportunity to complete their ‘crack down’ upon America.