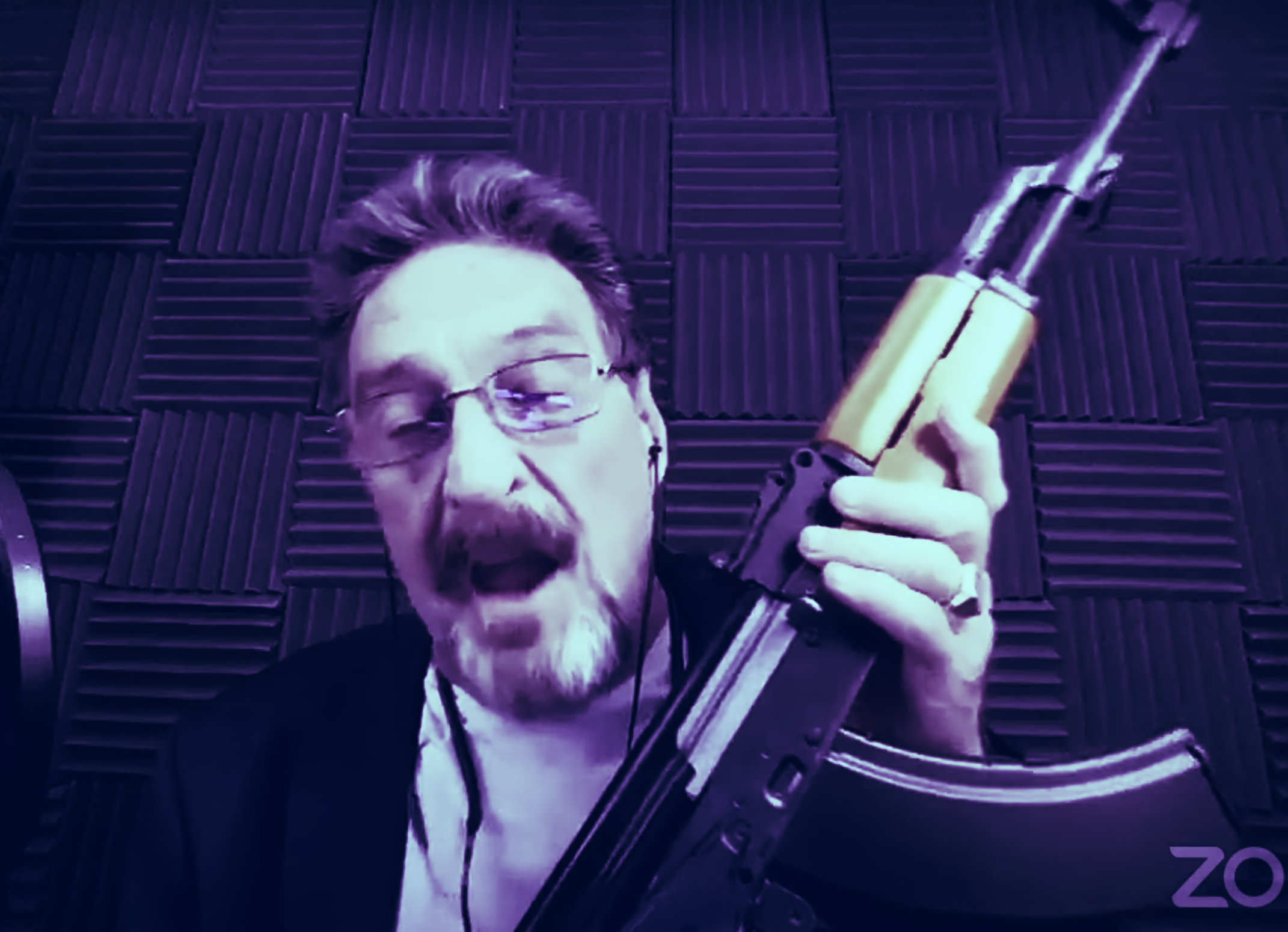 Even crypto can’t save us now, the eccentric tech guru said from his place of hiding.

McAfee shared his view on the “state of the world” at Virtual Blockchain Week.

He believes the numbers of COVID-19 death are skewed and presented out of context.

When the dollar collapses and food becomes scarce, people will need guns, he said.

he government is deceiving you. The pandemic is a ploy spread by the fake-news media, and if you care about your lives, go out and buy guns now.

That was the message of John McAfee. Between evil laughs and dark chucklings, the tech guru, tax fugitive, and general wild man shared his suspect views on the “state of the world” during COVID-19 last night at Virtual Blockchain Week.

“We are living in a paradigm the world has never seen before,” the 74-year-old crypto advocate and antivirus-software pioneer said, speaking from God knows where. (He’s kept his whereabouts a secret since fleeing Belize in 2012 after suspicions grew that he killed his neighbor.)

“One-third of the planet is in lockdown,” he said, adding that most of those people are sitting at home, watching TV, and not doing much of anything, while the US government “pulls money out of thin air.” The situation is not sustainable, he argued.

He was especially disturbed by a recent $2 trillion stimulus package in the US, which appears to be backed by nothing other than the good graces of the US government.

“You can’t pull money out of the air and expect everything to be okay. Money is based on something called industry, production, service. We haven’t increased any of that,” he said, with a deep, unsettling chuckle. He predicted the money-printing will lead to a collapse of the US dollar.

It’s too late for crypto

Bitcoin and blockchain were meant to “save us from financial slavery, and from the overburdened government that creates the fiat currency that we are forced to use,” McAfee said. But he doesn’t think crypto will save us this time.

“We are not going to jump into crypto,” he said, because it’s not easy enough to use. “It is not like opening a bank account. You have to spend days understanding what it is and how it works.”

But as far as the markets go, he predicts that the price of Bitcoin will spike ahead of the halving event on May 12. He recalled that in 2016, the last halving event, there was a huge rise in the price of Bitcoin, and then a huge drop. And he believes history will repeat because the same people populate the cryptosphere, and they’re just as greedy as they were four years ago.

As far as the threat of COVID19, McAfee thinks the number of deaths are skewed because they are presented out of context. It is certainly not worth shutting down entire economies, he believes.

Repeatedly, he said more people die of diarrhea and of the flu. But both comparisons, common attempts to downplay the severity of the virus, have been widely dismissed as reckless by leading epidemiologists.

But the way McAfee, who is known for his drug use and paranoia, sees it—just before opening his talk, he jokingly commented he was getting ready to shoot up with heroin—we are being lied to by the government and stirred up by the media. “If you use your head and common sense, you can see you are being deceived,” he said.