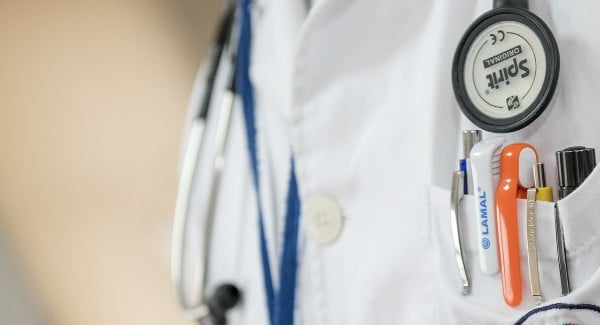 Dr. Stephen M. Smith: ‘It goes against all my understanding of medical ethics’

The infectious-disease specialist who briefed President Trump last month on the safety and effectiveness of hydroxychloroquine will no longer be allowed to prescribe the drug to patients at the New York City-area hospital where he has admitting privileges unless it’s done in a clinical trial.

Dr. Stephen M. Smith forwarded to WND an email he received Friday from the leadership of the infectious disease division at Saint Barnabas Medical Center in Livingson, New Jersey. The co-chair of the department, Dr. Lincoln Miller, announced the new policy to physicians, citing the recommendation of the hospital’s Pharmacy and Therapeutics Committee.

“I have never heard of a hospital doing something like this,” Smith told WND late Friday.

“It goes against all my understanding of medical ethics in research,” said the physician, a graduate of the Yale University School of Medicine and a former research scientist at the National Institute of Allergy and Infectious Diseases under Dr. Anthony Fauci.

“It’s totally unethical. You are not allowed to steer people into a clinical study,” Smith added. “That is strong-arming people.”

WND reached an assistant in Miller’s office who said the infectious-disease section co-chair would respond to a request for comment. But he did not call back by time this story was published. A member of the committee that made the recommendation, Alison Brophy, the assistant director of pharmacy for the hospital, also could not be reached for comment.

Smith said he has been under pressure for some time from management at Saint Barnabas to stop prescribing hydroxychloroquine and azithromycin to his patients. But each time he was pressed to stop, they backed away.

Now, he said, the hospital is inhibiting the use of a protocol he and many physicians have found to be effective and is backed by controlled studies worldwide, including a French study. Conflicting studies cited by media, he argues, vary widely in dosage and many other factors, making comparisons impossible.

“It’s never happened before,” he said of the new hospital policy. “It’s a bad sign for medicine going forward.”

He will continue to administer the protocol to patients at the clinic he directs in East Orange, New Jersey, the Smith Center for Infectious Diseases and Urban Health.

In an interview with WND on Wednesday, Smith expressed his frustration with the the politicization of the issue and the disconnect between the scientific data on hydroxychloroquine and the statements of scientists, media and politicians who have access to that data.

Miller informed members of the infectious disease team that, in a meeting Monday, the committee reviewed FDA drug safety communications regarding hydroxychloroquine use for COVID-19.

In a memo provided to physicians, the committee said it recommended “that patients with COVID-19 receive treatment with hydroxychloroquine only as a part of an investigational study.”

Miller, in his email, said that only “after confirming that a patient is not eligible for the study will orders for hydroxychloroquine be verified for non-investigational use.”

“It’s one thing to say you cannot get access to a drug that is not FDA approved,” Smith told WND. “This is drug has been approved by the FDA.”