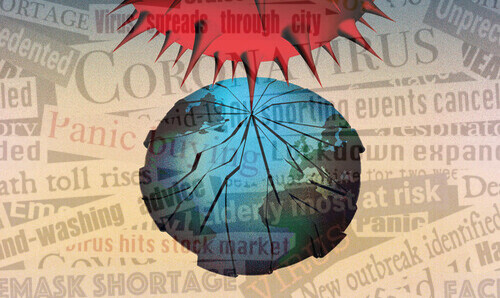 While the argument continues to rage on whether covid-19 is a manmade bioweapon or not with top intel agencies recently ruling out the virus being created in a lab while President Trump himself hinted he has evidence that it was, Steve Quayle recently linked to an incredibly important ‘flashback story’ on his website which, while not outright confirming the bioweapon theory, definitely gives more credibility to it.

With that story coming to us from the New York Times archive and dated April 5th of 1999, the story warned that China had already suffered serious accidents at their top-secret weapons facilities that create bioweapons, causing two epidemics, and hinting that an escaped or intentionally released bioweapon in 2020 isn’t that far out of the realm of possibility, especially with the virus ‘conveniently’ pushing nearly all of the globalists agendas.

And as the Activist Post points out in this new story, over the past 20 years, there have been at least 9 simulations, drills and laws passed that both planned and prepared for the kind of scenario we’re witnessing now with covid-19 as gone into in detail in the final video at the bottom of this story from videographer The Zolna Report.

With some state governor’s, such as Gavin Newsom in California and Gretchen Whitmer in Michigan, wasting no time at all to turn this crisis into an opportunity to lock down their states and impose tyranny, and Christians and churches across America under heavy-handed attacks, what if covid-19 actually is a ‘weapon’ of the globalists to install tyranny all across the planet as was recently hinted at by billionaire Elon Musk as was reported in this Infowars story? From Infowars.:

Tech billionaire Elon Musk changed his Twitter avatar to the box art of a 20-year-old video game that took place in a dystopian future that at the time seemed like pure science fiction, but now is looking disturbingly prophetic.

The game, titled ‘Deus Ex,’ had a plot that centered around a man-made virus used to control the population and an international elite that used an empowered China alongside a crippled America to further their agenda, all while exploring themes of transhumanism, mass surveillance, and the destruction of local powers and individual freedom. To be blunt, the game simply couldn’t be made today.

Elon Musk’s avatar change was around the same time of him calling out the inflated death counts of ‘corona.’ Remember, the game’s plot revolves around a man-made virus being instrumental to keep the masses in check.

Towards the end of the game, the hero tells the antagonist (ironically, a tech billionaire) that he is able to mass-produce a cure to save billions.

“A cure? A cure! Do you have any idea how easy it will be for me to make a new virus? All I have to do is find a very large prime number and multiply.” – Deus Ex villain Bob Page.

With ‘enemies of freedom and America within’ also able to manufacture new deadly viruses with frequency in their labs around the world, as we’d warned within this April 25th ANP story, there are “Nefarious Signs Covid-19 Is Being Used To Initiate The Overthrow Of Nations With Americans & The World Victims Of The Luciferians Most Sinister ‘Social Engineering’ Experiments”.

So as we’ll explore within the rest of this story, with some arguing that all of these lockdowns that could go on for 2 years are being used to condition people to simply ‘forget’ what freedom is, EVERYTHING is on the line now in America with the US Constitution and the 1st and 2nd Amendment’s absolutely ‘essential’ but those who were unable to impeach President Trump using this pandemic lockdown in an attempt to take them away.